Thanks to a pricing error Clicks is all but giving away women's razor blades for a fraction of their price – and it says it will continue to honour those prices.

But store visits by Business Insider South Africa showed that stocks are already running low, and they seem unlikely to last until 4 February, the last day of the promotion.

As part of a "bulk offer" promotion, Clicks is selling seven variations of Gillette Venus refill packs at a discount of up to 88%. Factoring in a per-customer limitation, that means you can save more than R2,100 on razor blades that normally sell for R2,400.

On Monday Clicks confirmed that the enormous discounts were as result of an error, "but Clicks if honouring the promotional prices on these selected products", said spokesperson Susann Caminada – until the end of the promotion on 4 February and while "promotional stocks" last.

Clicks appears to have intended to sell the four-pack boxes of razor cartridges for a flat price of R142 each, which would have represented a discount of between 19% and 53%. That is roughly in line with current discounts on other products in its stores, of between 20% and 50%.

Instead it phrased – and priced – its offer as "4 for R142", for four boxes that each contain four cartridges, even though the cheapest single box normally retails for R175.

The result is discounts starting at 80%.

The promotion is limited to eight units per customer, Clicks says, making for an upper limit saving of R2,100 in a single transaction.

The razors were also available at the Clicks website, but by Monday morning all those offers were marked as "out of stock". 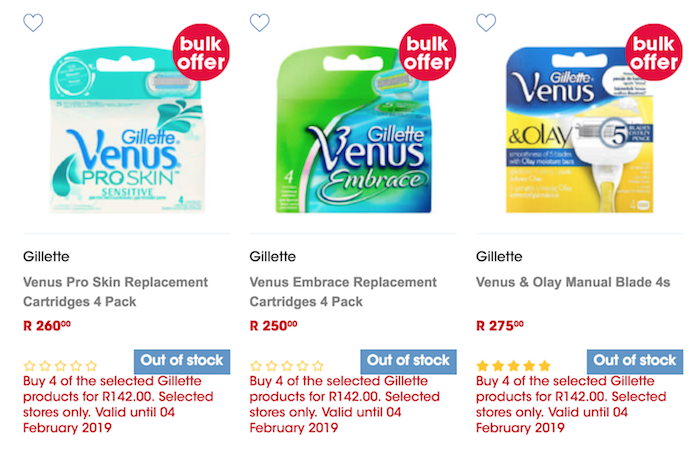 These are all the Gillette women's razor cartridge packs affected, and the discounts if you buy the four packs to trigger the special price, for a total of 16 cartridges:

A number of men's shaving products are also on sale if you buy at least three units – for a relatively paltry 33% discount.