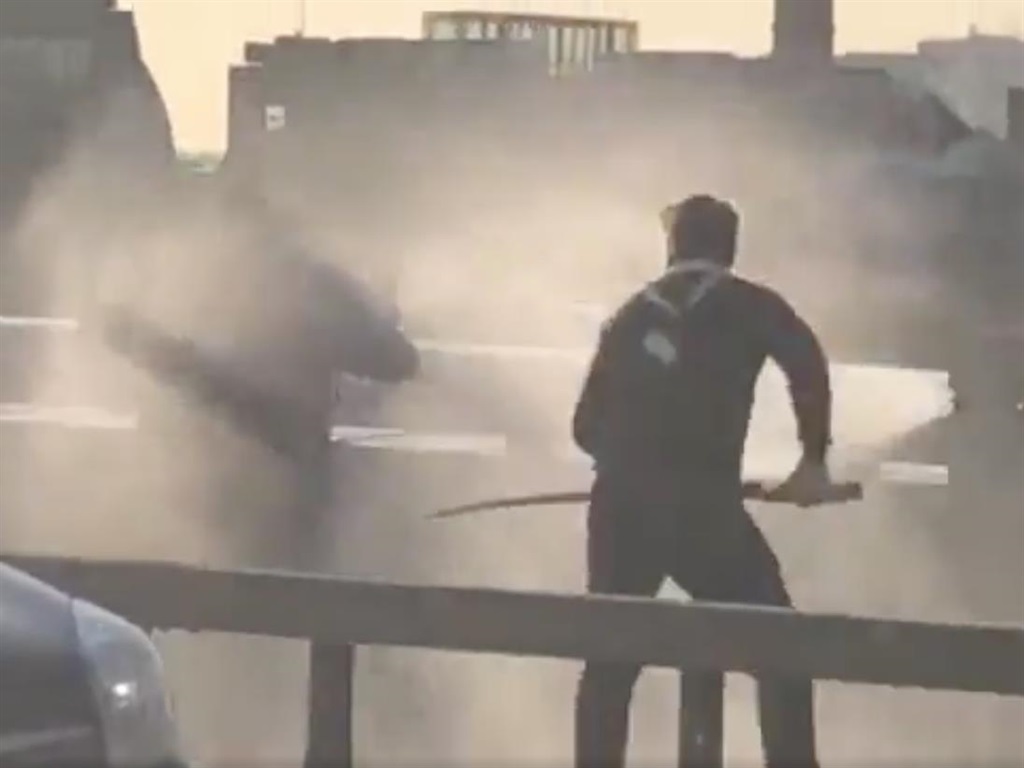 Civilians tackle Usman Khan on London Bridge with a narwhal tusk and a fire extinguisher.
Twitter/Dan Walker
The civilians who helped police tackle the London Bridge attacker yesterday have spoken out about what drove them to approach him.

The attacker, who was armed with two kitchen knives and a hoax bomb, has now been named as 28-year-old Usman Khan, who had previously been jailed for terrorism-related offences.

Police were called to London Bridge at 13.58 p.m. local time on Friday November 29 - two people were killed and another three left injured before the attacker was shot dead.

And now the bravery of the civilians who helped bring down Khan is being celebrated.

Local tour guide Thomas Gray, 24, and his colleague Steve were two of the people who helped disarm Khan - when they saw what was happening, they got out of their cars to go and help.

"I've played rugby my whole life - the rule is one in, all in," he told The Times. "My colleague Steve had the same thought and got out of his car. My thoughts were just 'stop the dude'." Thomas Gray speaking to The Times about the incident.
The Times

Gray continued: "I asked what was going on and they said the guy just stabbed two women back there. There were four or five guys on the floor with him. They were the bravest men I've ever seen.

"He was just saying, 'get off me' but there was no way that was going to happen. I stamped on his hand hard enough to break his wrist, and his grip loosened and he let go of the knife. Someone else kicked the knife away."

And from there, the police were able to take over, Gray said.

The tour guide added that he was "just a Londoner doing his bit" and went to the pub after the incident "to shake it off."

Londoners tackled Khan with a fire extinguisher and a narwhal tusk

These fellas are amazing. The terrorist has already killed 2 people, injured others and they chase him down with a whale tusk and a fire extinguisher. Heâ€™s wearing a suicide vest which they donâ€™t know is fake. Incredible. True heroes. #LondonBridge pic.twitter.com/0hduOInM9I

"These fellas are amazing," Walker wrote. "The terrorist has already killed 2 people, injured others and they chase him down with a whale tusk and a fire extinguisher. The tusk-bearer - who has been identified as a Polish man named Lukasz - had taken the tusk from the wall of Fishmongers' Hall, where the attack began.

TV director Amy Coop tweeted that he took the tusk to go and confront Khan.

A guy who was with us at Fishmongers Hall took a 5â€™ narwhale tusk from the wall and went out to confront the attacker. You can see him standing over the man (with what looks like a white pole) in the video. We were trying to help victims inside but that manâ€™s a hero #LondonBridge

Khan was attending an event at Fishmongers' Hall organised by Cambridge University's Institute of Criminology, according to The Times, where guests included former inmates and prison staff.

The publication reports that Lukasz works at the venue, and valiantly battled Khan despite having been cut in the hand.

"Being stabbed didn't stop him giving him a beating," one of the man's colleagues, who requested not to be named, told The Times. "Lukasz is a hero."