An F-35 is much more capable than the jet shown on the left, but on a runway, the F-35 is just a more expensive target.
US Navy

Experts at the cutting edge of simulated warfare have spoken: China would handily defeat the US military in the Pacific with quick bursts of missile fired at air bases.

The exact phrasing was that the US was getting "its ass handed to it" in those simulations, Breaking Defense reported the RAND analyst David Ochmanek as saying earlier in March.

"In every case I know of," Robert Work, a former deputy secretary of defence, said, "the F-35 rules the sky when it's in the sky, but it gets killed on the ground in large numbers."

Against China, which has emerged as the US's most formidable rival, this problem becomes more acute. China's vast, mountainous territory gives it millions of square kilometres in which to hide its extensive fleet of mobile long-, medium-, and short-range missiles.

In the opening minutes of a battle against the US, Beijing could unleash a barrage of missiles that would nail US forces in Guam, Japan, the Philippines, South Korea, and possibly Australia. With China's growing anti-ship capability, even US aircraft carriers in the region would likely come under intense fire.

For the US, this would be the feared attack in which F-35s and F-22s, fifth-generation aircraft and envy of the world, are blown apart in their hangars, runways are cratered, and ships are sunk in ports.

The remaining US forces in this case would be insufficient to back down China's air and sea forces, which could then easily scoop up a prize such as Taiwan.

Additionally, the US can't counter many of China's most relevant missile systems because of the Intermediate-Range Nuclear Forces treaty it signed with Russia, which prohibits missiles with ranges between 500 kilometres and 5,470 kilometres - the type it would need to hold Chinese targets at equal risk. (The US is withdrawing from that treaty.)

So given China's clear advantage in missile forces and the great incentive to knock out the best military with a sucker punch, why doesn't it try? 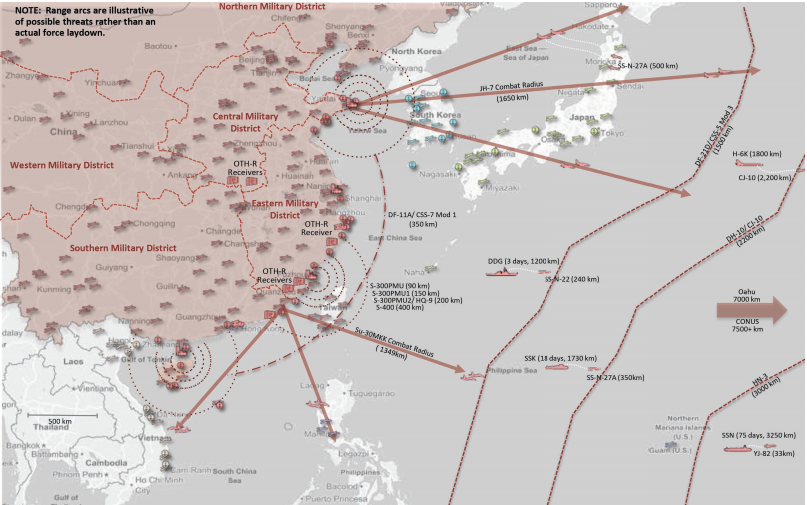 The ranges of Chinese ballistic and cruise missiles, air-defense systems, and warships.
Center for Strategic and Budgetary Assessments

China could light up much of the Pacific with a blistering salvo of missiles and do great harm to US ships and planes, but they likely won't because it would start World War III.

China wouldn't just be attacking the US. It would be attacking Japan and South Korea at a minimum. Whatever advantage China gained by kicking off a fight this way would have to balance against a combined response from the US and its allies.

The US is aware of the sucker-punch problem. In the event that tensions rise enough that a strike is likely, the US would simply spread its forces out among its bases and harden important structures, such as hangars, so they could absorb more punishment from missiles.

Potential targets China needed to strike would multiply, and the deployment of electronic and physical decoys would further complicate things for Beijing. For US ships at sea, the use of electronic decoys and onboard missile defenses would demand China throw tremendous numbers of missiles at the platforms, increasing the cost of such a strike.

Key US military bases will also have ballistic-missile defences, which could blunt the attack somewhat.

The US also monitors the skies for ballistic missiles, which would give it some warning time. Alert units could scramble their aircraft and be bearing down on China's airspace just after the first missiles hit.

Justin Bronk, a military-aviation expert at the Royal United Service Institute, pointed out at the institute's Combat Air Survivability conference that when the US hit Syria's Al Shayrat air base with 58 cruise missiles, planes were taking off from the base again within 24 hours.

Payback is a ... consideration Missiles brigades that just fired and revealed their positions would be sitting ducks for retaliation by the US or its allies.

Japan, which will soon have 100 F-35s, some of which will be tied into US Navy targeting networks, would jump into the fight swiftly.

China would have to mobilize a tremendous number of aircraft and naval assets to address that retaliatory strike. That mobilization, in addition to the preparations for the initial strike, may tip Beijing's hand, telegraphing the sucker punch and blunting its damage on US forces.

While China's missile forces pose a huge threat to the US, one punch isn't enough to knock out the world's best military, but it is enough to wake it up.