People in China will make 3 billion trips in the next 40 days to celebrate Lunar New Year, the world's largest annual human migration Travellers wait for their trains outside the entrance to Beijing railway station in the Chinese capital on January 10, 2020, as people begin to head for their hometowns ahead of the Lunar New Year.

There's no worse time to travel in China.

From January 10 to February 18, for 40 days, China is celebrating the Lunar New Year Spring Festival, also known as Chinese New Year. This year it could be especially congested as the holiday overlaps with university students' winter holidays.

Trains, planes, roads, and ferries will be filled to the brim as people journey home to be with their families.

One of the big reasons for the mass movement is that China is filled with workers who live in rural towns but work in the cities. Many of them, estimated to make up 20% of the Chinese population, head home for the celebrations.

Here's what the largest annual human migration in the world looks like in photos. Over 40 days, from January 10 to February 18, about 3 billion trips will be made by travelers on the move. Stations are already filling with masses of passengers waiting for buses, trains, planes, and ferries. It's the largest annual human migration in the world. By comparison, the annual Hajj pilgrimage to Mecca usually includes about 2 million people. While China follows the Gregorian calendar, its holidays are based on the moon's movements. This year, the Lunar New Year falls on January 25. The point of Chunyun is to celebrate family. It's focused on reunion and hope. Fireworks and lantern festivals are part of it, too, though they've decreased some as the government has tried to improve air quality. As of 2018, about 444 cities had banned or limited fireworks sales.

In such a large country, with a population greater than 1 billion, the celebration is an annual headache for airports and train stations.

It's the earliest Chinese New Year in eight years, and could result in additional congestion issues since the holiday overlaps with university students' winter holidays. Peak travel days are expected to be January 20 to January 22, and January 31 to February 1.

One of the main causes of congestion is China's commuting work population. About 20% of China's population lives in rural areas but travels to cities to work, and many of them head home for the holiday. Thousands of train services will be running to keep people moving, including bullet trains that go 185 mph. The country unveiled one that can go 217 mph (about 300 km/h) last week.

Staff have been prepped and ready to work on the largest rail network in the world. According to Chinese government estimations, of the 3 billion trips, 440 million will be by train. Since last year's festivities, China built about 5,275 miles (about 8,000km) of new railroad.

China's government is also giving discounted tickets to people who take a "reverse route," trying to incentivise people to leave their rural towns and go celebrate in cities. Even so, the majority of journeys will be in cars. China's government estimates there will be about 2.43 billion road trips. This is a motorway during the holiday season back in 2018. 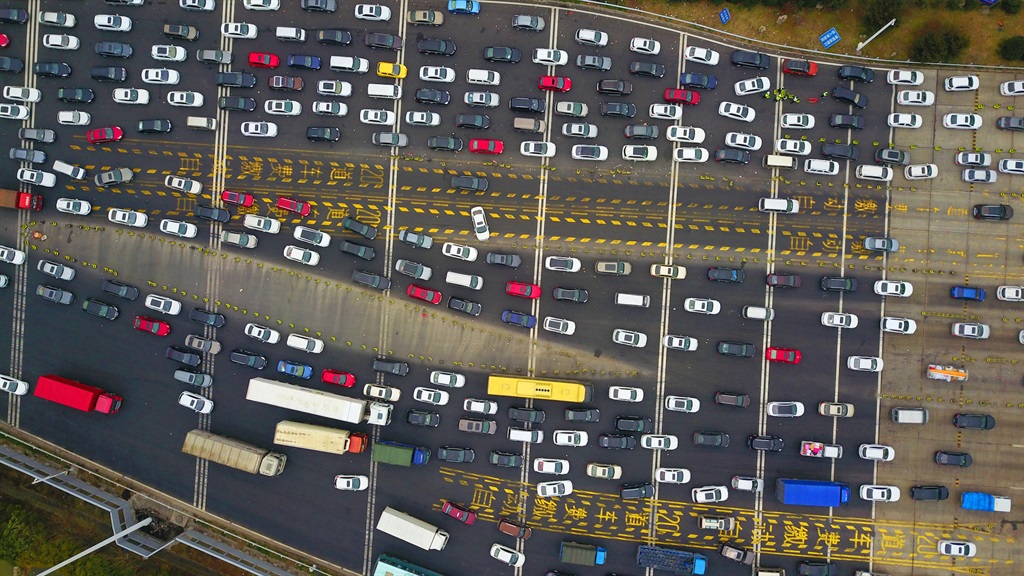 It's a slow, tiring trip for many.

And the stress on infrastructure is no laughing matter. In 2016, snow and freezing temperatures stranded 100,000 people at a single train station. China deployed 2,600 police guards to to maintain order. Some Hong Kong protesters are using the holiday to continue calling for independence from China. As recently as January 1, 400 protesters were arrested during a march that turned violent.

For many, Chunyun is the best part of the year, and worth the congestion to see friends and family.