China's debt-trap diplomacy reaches the Philippines, which is likely to accept Chinese loans 1,100% more expensive than other options 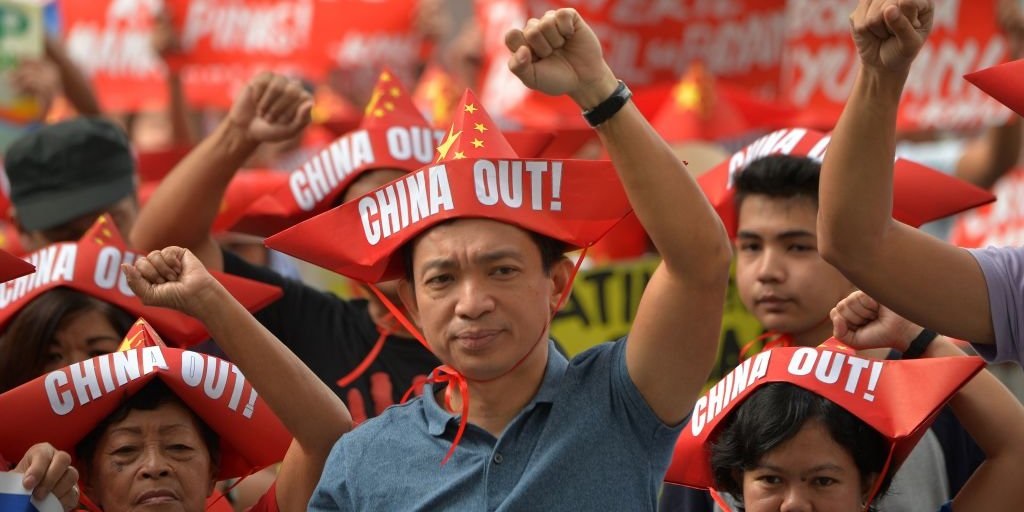 Activists march towards the Chinese consulate for a protest in Manila on February 10, 2018, against Beijing's claims in the South China Sea.
TED ALJIBE/AFP/Getty Images
The Philippines is close to accepting Chinese loans that are up to 1,100% more expensive than those from Japan, in another instance of China's debt-trap diplomacy.

The loans from China, which will be used to fast-track infrastructure projects including a dam, railway project, and irrigation system, come with an interest rate of 2% to 3%. But loans available from Japan have interests rates between 0.25 and 0.75%, up to 12 times cheaper than those from China.

"We cannot get all the loans from ... Japan. Between 2 and 3% interest rate is still much better than commercial [loans],” Ernesto M. Pernia, the Philippines' chief economist, announced in February.

According to the government's official news agency, Pernia said Japan's slowness was part of the reason — "We don’t want to be left behind" — but CNN and local outlet Rappler both reported the economist weighing up the need for diplomatic "friends."

"More friends is still better than fewer friends," he said.

The Philippines has fought with China for years over territorial disputes in the South China Sea. But President Rodrigo Duterte has overseen trade growth between the two countries, and China is now the country's biggest trading partner.

China has a pattern of funding infrastructure projects in poorer countries in exchange for better relations and regional access, a trend called debt-trap diplomacy.

One of the biggest culprits has been China's Belt and Road initiative, a trillion-dollar project to link 70 countries in Asia, Oceania, Africa, and Europe with railway lines and shipping lanes. To fund the infrastructure projects — which are attractive to poorer and underdeveloped countries that struggle to secure traditional financing — China offers their own loans.

The loans can have exorbitant interest rates or natural resources are used as collateral that China can control if a country defaults on its payments.

China's loans can also come with other strings.

In the Philippines, Chinese-owned contractors will be required to work on the infrastructure projects, rather than supporting local companies and workers. And with an emerging pattern of Chinese-owned businesses being siezed by their own government, the line between state and business is blurring.

This week China announced it's increasing the 2018 budget by more than 15%, twice the increase on military spending, to $9.5 billion.

Xi made his intentions clear in October last year.

"It is time for us to take centre stage in the world," he said.