China is the midst of several megaprojects that will transform its cities.

Over the next decade, China plans to encourage 250 million people (29 times New York City's population) to move into the country's growing megacities. To cope with that huge migration, the country has invested tens of billions of dollars in giant infrastructure projects.

This month, China will open its most ambitious megaproject yet, a bridge that connects Hong Kong, Macau, and the mainland's southern city of Zhuhai. Stretching 54km (34 miles), it's the world's longest cross-sea bridge, according to the AFP. Take a look:

Called the Hong Kong-Zhuhai-Macau Bridge, the project is expected to cut travel time in half. A street in Hong Kong.
AP

Commuters will be able to travel across the Pearl River Estuary from Macau to Hong Kong in about an hour. Here's a map of the route: The bridge features six lanes and four tunnels, one of which is underwater. Touted as an "engineering wonder," the bridge is made of 420,000 tons of steel — enough to build 60 Eiffel Towers. Some sections have slight inclines. Some 40,000 vehicles are expected to use the bridge daily, including shuttle buses running at 10-minute intervals. Pedestrians will not be able to cross the bridge, nor will bicyclists; it's just for cars. Officials say the bridge will be up and running for 120 years. 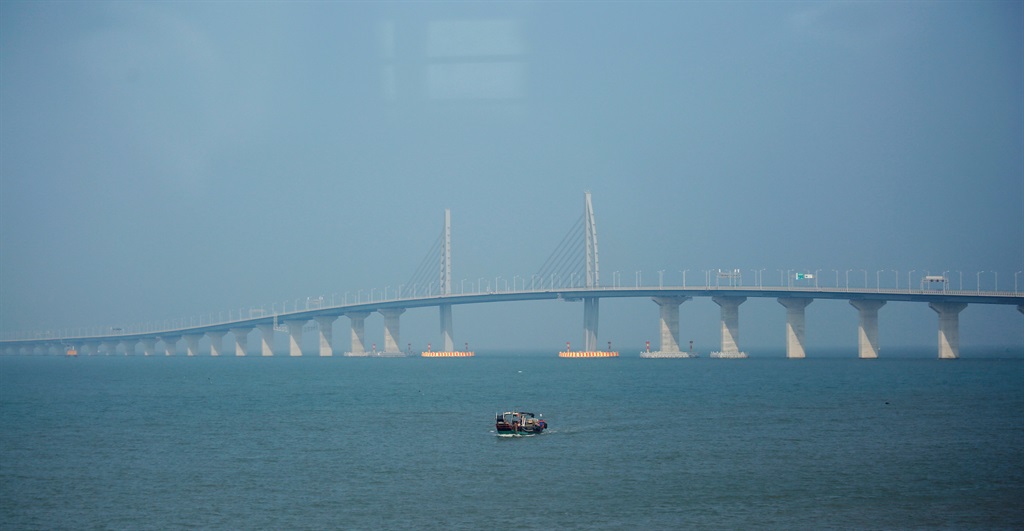 The project has faced controversy because of its expensive price, construction delays, alleged corruption, and worker-safety concerns. Two workers died and 19 more were charged with faking concrete-test reports. China is already home to (now the second) longest sea bridge, which spans 42.3 km (26.3 miles). Completed in 2011, the R18 billion ($1.5 billion) structure links the eastern coastal city of Qingdao to the suburb of Huangdao. Hundreds of high-speed trains at a maintenance base wait to set out on the first day of the 40-day Spring Festival Travel Peak, February 1, 2018, in Wuhan, China.
Reuters