Before-and-after images of the Huoshenshan Hospital being built in Wuhan, China.

Videos show the shockingly rapid progress the city of Wuhan, China, is making with two new hospitals it's panic-building to fight the deadly coronavirus.

The rapidly spreading virus, which is transmitted from human to human, had killed at least 100 people and infected more than 4,500 as of Tuesday. 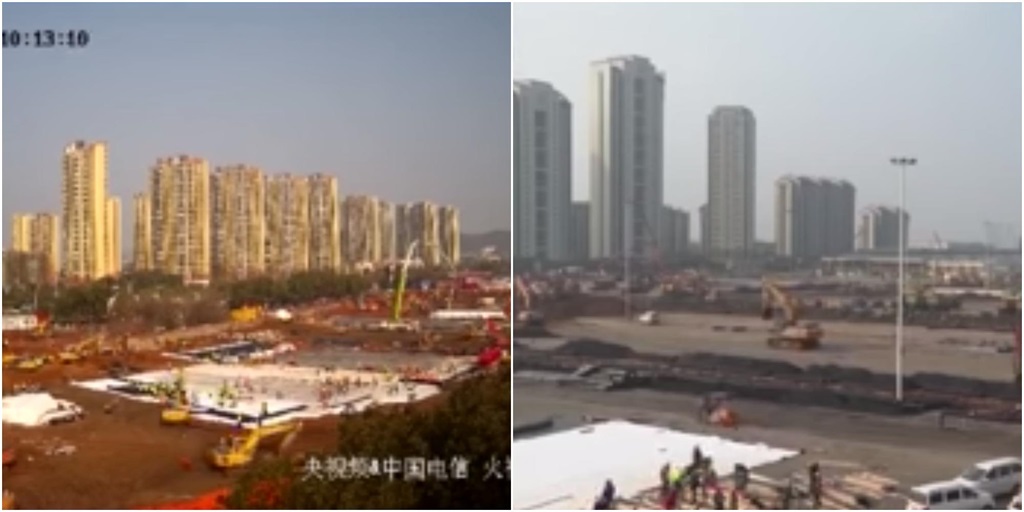 Images from a video showing the Huoshenshan and Leishenshan hospitals being built in Wuhan.
YouTube/CGTN

Medics in Wuhan, the city of 11 million people where the virus originated, have described overcrowded hospitals and a shortage of test kits, protective gear, and other medical equipment.

To alleviate this pressure, city authorities last Friday announced plans to build a new hospital from scratch in just six days, to be used beginning February 3.

Wuhan on Saturday expanded those plans, and it is now urgently building two hospitals, the state-run People's Daily reported. A map showing the location of the two sites for Wuhan's new coronavirus hospitals.
Google Maps

One is the Wuhan Huoshenshan Hospital, which is due to open February 3 with an area of 25,000 square meters, or 269,000 square feet, and 1,000 beds, according to People's Daily. Construction on this site began Friday.

The second is the Leishenshan Hospital, which is due to open February 5 with an area of 30,000 square meters (323,000 square feet) and 1,300 beds, CGTN reported. Construction on this site started Monday.

They are located about 25 miles apart.

Chinese state media have since at least Tuesday been livestreaming footage of workers racing against the clock to build the two sites. About 10 million people had been watching it as of Tuesday afternoon local time, People's Daily said.

This time-lapse video, published by People's Daily and MailOnline, also shows the construction of the Huoshenshan Hospital:

It shows dozens of cranes and construction trucks at work, as well as the rising foundations of the building. The background music, typical in many Chinese state propaganda videos, suggests authorities are proud of the progress they're making.

Chinese authorities have plans to build two more hospitals in the nearby city of Huanggang and Zhenzhou, a city about 300 miles away, MailOnline reported.

In 2003, Chinese authorities built the Xiaotangshan Hospital in Beijing in just seven days to respond to the SARS epidemic. It treated one-seventh of all of the country's SARS patients at the time, People's Daily said.

Related Links
Bill Gates is spending R75 million to fight the coronavirus in Africa. He has warned about a...
The coronavirus has reached Los Angeles, where the fourth person diagnosed in the US just arrived...
Hong Kong protesters set planned quarantine building on fire amid coronavirus concerns
Next on Business Insider
Japan is encouraging young people to drink more alcohol to help boost its economy