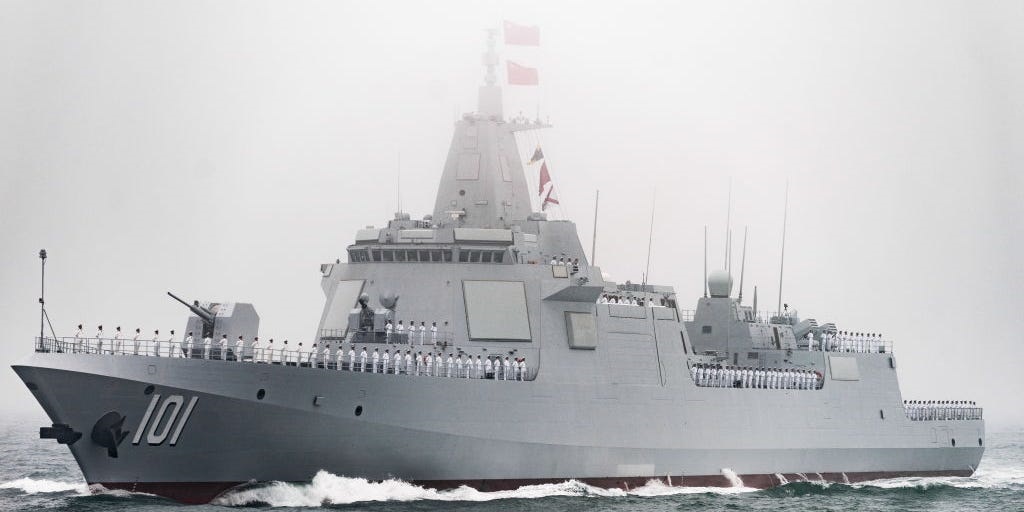 China added three new vessels to its navy on the same day on Friday, in a first for the service and a move that appears intended to highlight the navy's growing ability to fight at sea.

The commissioning event was personally attended by Chinese leader Xi Jinping. During the unprecedented joint ceremony, the new warships were added to the South Sea Fleet, which oversees operations around Taiwan and in the disputed South China Sea.

The Changzheng-18 is a part of the submarine class that serves as China's sea-based nuclear deterrent. The Dalian is part of a new class of advanced destroyers built in part to escort China's expanding carrier fleet.

The Hainan is the first of a new class of warship that can carry aircraft, watercraft, and Marine infantry for amphibious assault operations. Chinese leader Xi Jinping presents a Chinese flag and the naming certificate to the captain and political commissar of the Changzheng-18, on April 23, 2021
Xinhua/Li Gang via Getty Images

Chinese state-run media outlet CGTN also highlighted the potential roles of the Changzheng-18 and Hainan in "nuclear retaliation" and "taking islands" in its reporting on the new warships.

Following the unusual commissioning ceremony, Chinese media, in coordination with the Chinese military, released video footage of the destroyer and amphibious assault ship in action during military exercises. Global Times characterised the display a "powerful deterrent" message to the US, Taiwan, and others.

US military leaders have called China a "pacing" challenge, and concerns have been raised repeatedly about the increased capacity and capability of the Chinese Chinese navy.

China "has the largest navy in the world, with an overall battle force of approximately 350 ships and submarines including over 130 major surface combatants," the US Pentagon assessed in its 2020 China Military Power report.

The Pentagon also reported that "China is the top ship-producing nation in the world by tonnage," adding that the country is currently working hard to increase "its shipbuilding capacity and capability for all naval classes."

Last week's unusual commissioning "is a sign of the pretty impressive advances that the PLAN has had in the past few years," Timothy Heath, senior international defense researcher at the RAND Corporation, told Insider. Heath said the simultaneous entry of three warships into service is a "good symbol of some broader trends," and it shows a "Chinese navy that is confident, clearly well resourced, and that is producing high-quality, advanced warships at a very rapid rate."

Toward the end of the Donald Trump administration, the Pentagon unveiled a plan calling for a 500-ship navy by 2045 to counter China at sea. The plan, a version of which is outlined in the US Navy's 30-year shipbuilding plan, calls for significantly more manned and unmanned naval assets. The projected cost is over $1 trillion.

"The United States must be ready to deter conflict, and if necessary, fight and win at sea," former Secretary of Defense Mark Esper said in September, adding that the US needs a "more lethal, survivable, adaptable, sustainable, modern, and larger force than we have seen in many years."

It is unclear exactly how the Biden administration intends to move forward on efforts to maintain military overmatch at sea, but Secretary of Defense Lloyd Austin has made China a priority for the Department of Defense going forward.

Austin stressed in a message to the force in early March that "the Department will prioritize China as our number one pacing challenge and develop the right operational concepts, capabilities, and plans to bolster deterrence and maintain our competitive advantage."

Related Links
A mini replica of the Suez Canal in a French lake is helping mariners learn from Ever Given
TAKE A LOOK | Aboard the Royal Britannia Yacht, the British Queen's 'floating palace'
TAKE A LOOK | Royal Caribbean just welcomed its newest ship, the Odyssey of the Seas
Next on Business Insider
China rebuts NASA chief's claim that the country is trying to land on and occupy the moon