China aims to reduce its dependence on America by 'decoupling' from the dollar, ANZ bank says China is trying to reduce its dependency on America.

According to analysts at ANZ, the trade war is causing the world's second-biggest economy to move away from the dollar, and instead upping its holdings of other foreign currencies.

"The ongoing trade war and geopolitical issues have increased the risk of a financial decoupling between China and the US," said Raymond Yeung, Greater China chief economist, in a note.

"Although China still allocates a high share of its FX exchange reserves to the US dollar, estimated at around 59% as of June 2019, the pace of diversification into other currencies will likely quicken going forward," Yeung said.

China's currency, the yuan, is dollar-pegged currently and in the last year became a weapon to fight back against Trump's trade war. In August, China let its currency fall, letting it decline to make Chinese goods cheaper to export, and American goods more expensive in light of tariff hikes - a move that shocked markets.

The ANZ economist added, "China has been a major contributor to the global savings glut," saying that excessive savings led to mass capital flows towards American households and low-interest rates. Yeung also said there's been a "significant amount" invested from China's manufacturing sector to US government bonds.

He said this trend, which his team nicknamed, "factory-dollar recycling," has contributed to "the global prominence of the US dollar over the past decade. However, if China initiates a convertible standard superior to the fiat-money regime, not only will it gain a market following, but it will also boost the global acceptance of the RMB." 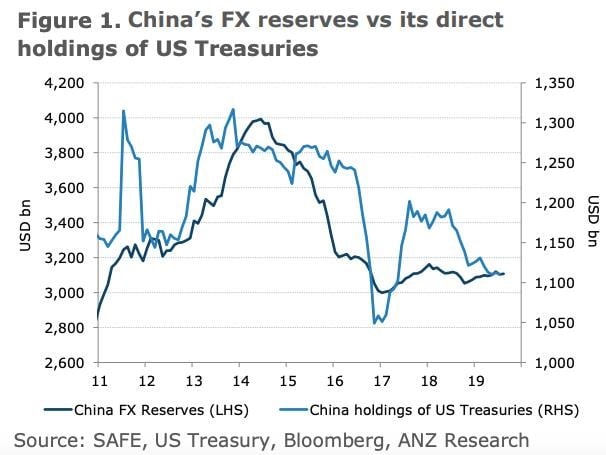 China's US treasuries have fallen during the trade war
ANZ