These are the cheapest food franchises you can buy in South Africa - including King Pie, Sausage Saloon, and Corner Bakery The King Pie franchises are among the cheapest food franchise businesses to purchase.

In recent years, the country has seen the arrival of several new big international brands. But most of the established food franchise businesses in South Africa are operated by just a handful of holding companies.

This means purchasing a Steers, KFC, Mugg & Bean, Nandos or McDonalds franchise will typically cost millions in franchise and set up fees. But there are several budget fast food options available.

Although these may not be as well-known or popular as the mainstream burger, chicken and pizza joints, the initial investments and monthly marketing royalties are often significantly lower.

At entry level it’s possible to open a turnkey chip stand for under R100,000. And if you want the security of a listed company, you can even purchase a takeaway fish and chips outlet for under R1 million.

Here are some options. Corner Bakery operates both as standalone businesses and as stores integrated into Engen petrol stations.

Both options are available for purchase as franchises and and can be customised to suit your investment needs. They are generally small businesses to run - most stores are between 40 and 50 square metres, and employ four team members.

Franchisees must then pay ongoing brand fees, based on turnover. This is 7% for stores within Engen service stations and 8% as standalone stores. King Pie sells pies and pastries at select locations throughout the country. There are several models currently available to franchise, including a King Pie store, express unit, or kiosk.

The King Pie franchises are among the cheapest food franchise businesses to purchase.

The biggest and most expensive of the operations, the King Pie store, costs up to R550,000 (excluding VAT) to establish. This also requires a joining fee of R55,000, and flat rate marketing fees of approximately R6,000 per month.

The King Pie kiosks, which are businesses located in open areas of shopping centres, cost R180,000, excluding VAT, to establish. These usually operate in conjunction with a full store in the same centre that bakes the pies, but they can be built as standalone operations. Franchisees must pay a joining fee of R5,000, and monthly management and marketing fees of R1,500.

King Pie also has express units for sale. These cost approximately R330,000 (excluding VAT). They typically operate as standalone, outdoor stores in areas of high foot traffic, like universities, train stations and taxi ranks. Franchisees must pay a joining fee of R10,000, and monthly management and marketing fees of R1,500.

There are also opportunities for existing franchisees to expand their business with cost-effective mobile units, like trailers, tuk-tuks, and bicycles. 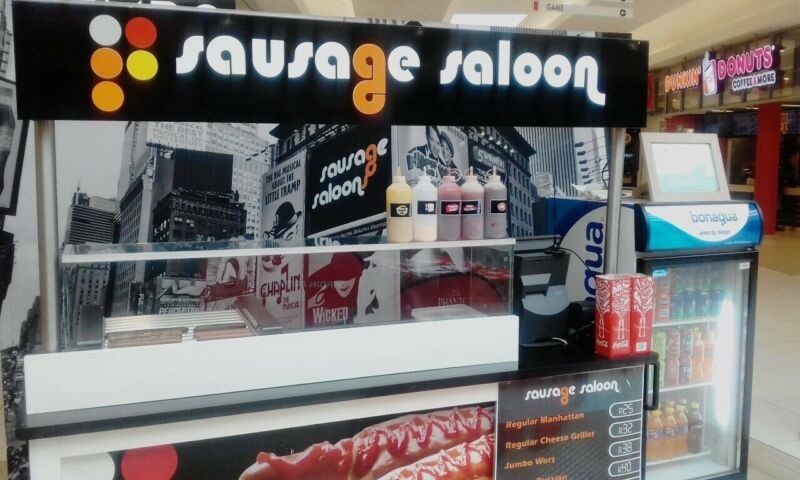 There are currently more than 100 franchised outlets across South Africa.

Sausage Saloon has a long history in South Africa. They sell a wide range of good value sausages, hot dogs, and other related fast-food combinations from simple shops, kiosks, or mobile operations.

The business started in South Africa in 1997, and there are currently more than 100 franchised outlets across the country. They are currently looking for franchisees at new and existing locations. There are also several existing franchise stores currently up for sale.

The average initial set up cost of a Sausage Saloon outlet is R795,000, along with a franchise fee of R75,000. They also require a working capital of R200,000 - 60% of this initial investment must be available in unencumbered cash. The Fish & Chip Co. was established in 2009. Listed company Taste Holdings acquired the business in 2012, and subsequently rolled out the franchise across the country.

There are now 190 stores in the chain. They offer a basic selection of fish and chips, calamari, and sausages.

Franchisees must then pay a fixed weekly management and marketing fee of R1,470. The initial franchise agreement is for five years. Chip 'n Dip is a slap chip take away business that was established in South Africa in 1990. The brand has since grown to include more than 100 franchises.

Part of the success of this franchise lies in the low initial fees, and the low cost of the products on sale. Most are positioned in areas of high foot traffic, such as sporting events and food courts.

There are two main Chip n Dip business options available - a mobile outlet, and a gazebo.

Here’s how much it costs to open a Chicken Licken, Nando’s or KFC outlet

Here’s what it costs to buy into some of SA’s hottest franchises: Sorbet, Universal Paints, and Kids Emporium

Here’s how much it costs to open a Vida, Mugg & Bean or Bootlegger coffee shop

Related Links
Here are some of the cheapest franchise businesses you can buy in South Africa
Here’s what it costs to buy into some of SA’s hottest franchises: Sorbet, Universal Paints, and...
Here’s how much it costs to open a Vida, Mugg & Bean or Bootlegger coffee shop
Next on Business Insider
McDonald's is quitting Russia after more than 30 years in the country