The web has brought a plethora of ways to sell stuff to other people more conveniently, notably hugely popular sites such as Gumtree and Bidorbuy. But those still mean advertising, then waiting for replies, then trying to weed out the scammers, then meting up a potential buyer, and ultimately hoping you don't get stabbed, literally or figuratively.

On the other end of the second-hand goods spectrum is South Africa's large contingent of second-hand goods stores, both independents and large chains. If you want to get rid of something fast, and without the fuss, they'll often be happy to take it off your hands – at a price that allows them to still sell it at a profit – for just the effort of walking into the store.

Of course, if you don't like the price you can walk straight out again, lugging all your stuff with you, and try the next store.

But there is an in-between way. We discovered that Cash Crusaders has an online matchmaking system where it connects potential sellers to its huge number of stores throughout the country.

This is what happened when we tried selling old stuff we didn't want via Cash Crusader's website.

An end-of-year clean-out unearthed the remnants of a youth when surround sound was still a thing... ... and serious bass was a priority. The other speakers in the set had long moved on to other jobs, so there was no full set to sell, and the gear wasn't exactly in pristine condition anymore, after years of hard work, then more years of neglect. But surely someone would pay for some still decent speakers – without the trouble of classified ads or driving around to stores?

As it turns out, there is a sort-of-online solution to just that problem.

The hard-to-miss banner on the Cash Crusaders front page takes you to the separate selling site: CrusadersSell.co.za The selling site doesn't overwhelm you with detailed questions or requirements. Give the site your suburb, and it pops up a selection of nearby stores – and in large swathes of SA, there are a couple of these ubiquitous stores around. 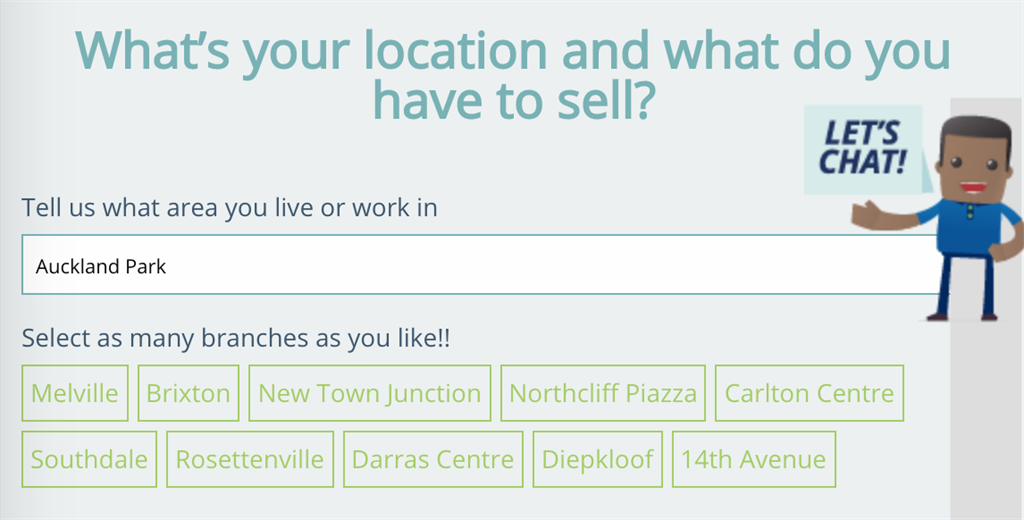 It makes sense to select as many stores as possible – but you may regret that later, as we discovered. Especially if you are dealing with something bulky and hard to transport, rather make sure you select stores easy to get to, and with decent parking nearby.

Adding photos is optional, but it will save you time later.

Within 30 minutes a human being was in touch, asking for those photos.

It took a day, but when an "online consultant" came back with offers, it seemed worth the small wait. The process was supposed to take a day, and it did, roughly, not counting a weekend in between. During that time we did exactly nothing: no travelling to different stores with a bunch of stuff, not so much as picking up a phone. Instead a consultant found out that one store saw twice the value in our stuff that another one did – and even told us to ask for Lindo by name.

So it was off to meet Lindo at Cash Crusaders Roodepoort. Some second-hand and pawn shops are convenient for loading and unloading goods. Cash Crusaders Roodepoort, with limited and hard-fought street parking, is not one of those. But Lindo was happy to help lug our speakers around the block and set them up for a test. Like all goods, electronics must be tested to the satisfaction of the buyer. But as Lindo illustrated, a Cash Crusaders store typically has everything you need to, say, hook up a couple of speakers to check their sound output. He even has a favourite track to check the bass on speakers: a bass-boosted version of "Mind" from Skrillex and Diplo.

Lindo was happy – if only happy enough to settle on a price in the middle of the range his store initially indicated. After a bit of back and forth, Lindo handed over R1,350. In cash. Cash Crusaders isn't kidding with its name, it deals in cash only, no fancy bank transfers and the like – something to keep in mind when dealing with more valuable items.

Dealing with a store was much faster and more convenient than a private sale – which showed in a lower price. But getting a chain of second hand stores to pre-bid helped a bit, at least. And at least the speakers are no longer forgotten under a spare bed.

Related Links
Two new SA car auction sites promise to get sellers their money fast - here's what we know
You can probably sell that Louis Vuitton bag for decent money in SA, but good luck with your old...
You can pay up to R3 million for a second-hand watch from the company Johann Rupert’s Richemont...
Next on Business Insider
US wins legal dispute to seize Russian gold tycoon's $300 million superyacht in Fiji - report