At this point in 2017, the six major dams that serve Cape Town stood at about 35% capacity as the Western Cape moved towards its dry season. By early 2018, the term "Day Zero" was being bandied about.

This year they are nearly all literally full to the brim.

As of Thursday, the collective capacity of the six main dams stood at 101.4%, the City of Cape Town's statistics showed. Five of them were recorded at more than 100% full: Berg River, Steenbras Lower, Theewaterskloof, Voëlvlei, Wemmershoek. Only the Steenbras Upper Dam fell short, at 96.3%.

That leaves Cape Town, and the surrounding towns and agricultural users that draw from the same dams to a lesser extent, with a total of 911,182 megalitres of water across the dam system.

At this time of year, the dams at around 70% full would be considered dangerous, with an emergency response required at around 40%.

City managers have called on residents to continue to use water responsibly, as they largely have since 2018, with data for the last decade showing the growing city has never gone back to the kind of profligate use seen in 2014 and 2015. 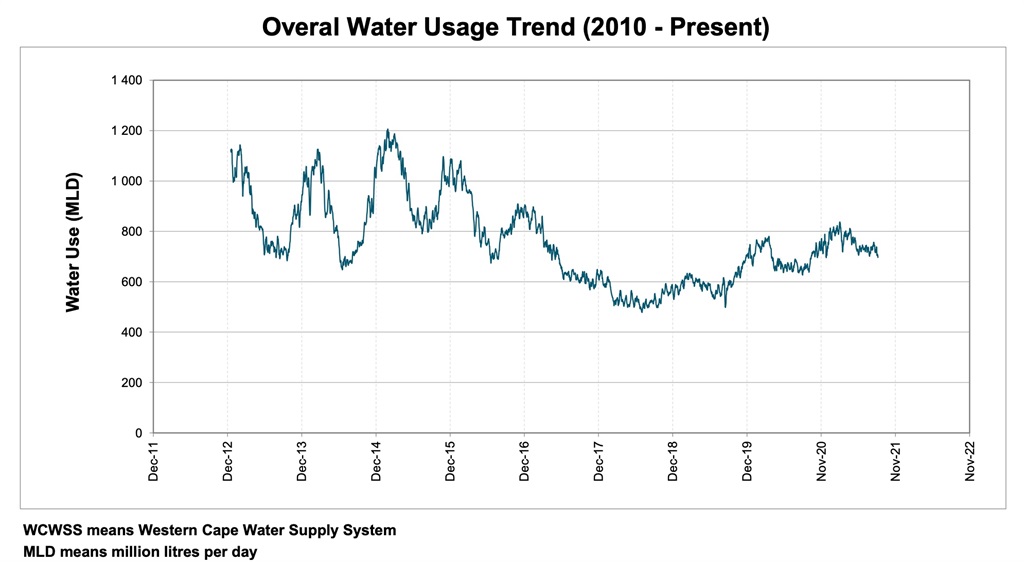 The Western Cape in general – and much of the rest of the the country – also has many full dams. This week the water and sanitation department reported the nation’s dams at more than 80% full on average, with the Western Cape coming in at 82.3%.

Dams at an average of more than 90% full were reported in the Free State, Gauteng, and Northern Cape.

The long-dragging drought in the Eastern Cape reflects in total dams at just over half full, and the currently dry KwaZulu-Natal’s dams are at 67%.