The Busbuckridge Local Municipality in Mpumalanga recently re-tweeted an image in which a road was built around an electricity pole.

In the tweet, it also showed how they fixed the 'mistake' after the fact. While many took to the post to challenge the images' authenticity, others questioned how this could have happened.

Speaking to Business Insider South Africa, municipal spokesperson, Aubrey Mnisi says the images are real. The pictures were taken in Acornhoek, in Bushbuckridge.

Mnisi says that they decided to share them again on Friday as a reminder of the rectified incident.

"We didn't expect people to still be surprised by it," he said. 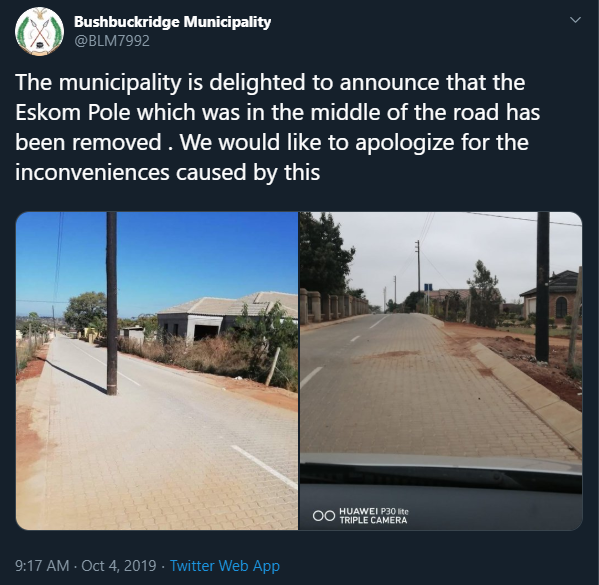 According to Mnisi, the 'mistake' was as a result of home stands being handed out to residents before electricity was installed in the area.

"The people received electricity shortly thereafter and the poles were placed accordingly."

It was only after they started paving the area's roads that they realised one of the poles was problematic.

"It was then that the road was built around the pole."

The pole was removed two months ago, when the image was first tweeted.

The roadworks are part of the municipality's paving of internal streets project.

The Executive Mayor Cllr Sylvia Nxumalo has officially handed over the paved Malubane street phase 1 and the handover took place yesterday, the 21st of August 2019. The 1.3. Kilometers paved street costed the municipality R 11 648 250.35 and its 100% completed.

Phase 1 of the project between Hazyview and Mkhuhlu was started in November 2018 and completed in June.

The project started on the 23rd November 2018 and was completed on the 11th June 2019. The internal street connects Malubane to the R536 Road between Hazyview and Mkhuhlu . pic.twitter.com/FP1QYOVk54