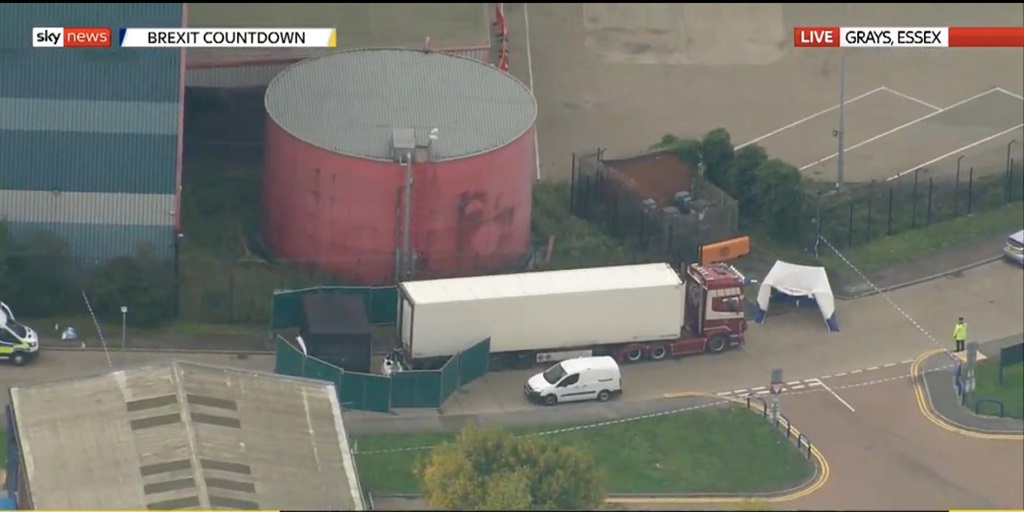 The truck at the Waterglade Industrial Estate.
Sky News

British police say they discovered 39 dead bodies in the back of a haulage truck early on Wednesday morning.

Essex Police were called to an industrial park near the town of Grays, in the eastern English county of Essex at 1:40 a.m. local time (8.40 p.m. ET), after an ambulance had been called, the department said in a statement. Grays is around 23 miles from central London.

All 39 people were dead when police arrived at the scene, police said, adding that 38 are adults and one is a teenager.

Police said they arrested the truck driver, a 25-year-old-man from Northern Ireland, on suspicion of murder.

"We have arrested the lorry driver in connection with the incident who remains in police custody as our enquiries continue," Essex Police Chief Superintendent Andrew Mariner said.

Iâ€™m appalled by this tragic incident in Essex. I am receiving regular updates and the Home Office will work closely with Essex Police as we establish exactly what has happened. My thoughts are with all those who lost their lives & their loved ones.

The truck is believed to be from Bulgaria, and entered through the port of Holyhead in north Wales on October 19.

"This is a tragic incident where a large number of people have lost their lives. Our enquiries are ongoing to establish what has happened," Mariner added.