"It couldn't have been more perfect," Burky said.
Sally Burky

Weddings are all about the bride, but one newlywed shared a bit of the spotlight on her big day to help promote a cause close to her heart.

Sally Burky of Ozark, Missouri, knew that she wanted her wedding to be unique in at least one aspect; she wanted her bridesmaids to carry something besides flowers down the aisle.

Burky turned to Pinterest to get some ideas. She quickly came across a bride who swapped out her bridesmaids' bouquets for puppies at her wedding, which inspired a plan for Burky's own wedding.

"It sparked the idea of having rescue dogs in the ceremony," Burky told INSIDER via email. "I first suggested it to my husband and he laughed and said whatever you want hunny, let's do it. He knows how much rescue means to me and couldn't have imagined our wedding any different."

"It couldn't have been more perfect," Burky said.
Sally Burky

Burky had been an avid supporter of Haven of the Ozarks, a no-kill shelter based in Washburn, Missouri, ever since she rescued two dogs whose "owner was threatening the worst". It made sense, then, that she would ask the shelter to provide the adoptable pups for her big day.

"I found [Haven of the Ozarks] on Facebook and without hesitation, they offered shelter for the dogs," Burky said. "Ever since then I have tried making donations as often as I can. [My husband] and I agree when the time comes for another companion, the Haven is where we will turn."

Burky reached out to her wedding venue to confirm that she would be able to incorporate the dogs into her wedding ceremony. On the day of the wedding, Haven of the Ozarks drove some dogs looking for homes to Burky's wedding venue.

Each bridesmaid was paired with a pup that she walked down the aisle with. Although Burky was not there to watch the procession, she said that she saw photos and videos after the ceremony.

"They all did so well and stood right by the bridesmaids and groomsmen as we said our vows," Burky said. "It couldn't have been more perfect." Four of the five dogs who participated in her wedding had been adopted at the time of writing.
Sally Burky

Burky hoped that incorporating older shelter dogs into her wedding would help raise awareness for Haven of the Ozarks and help the dogs find permanent homes. She and her husband, Cary, also collected donations for the animal sanctuary on their wedding day, but the outpouring of support and attention the dogs and the shelter received far exceeded their expectations.

"The response has been incredible," Burky said. "We simply were hoping for maybe one to be adopted or for some guests to make donations."

Instead, Burky told INSIDER that four of the five dogs that participated in her wedding had been adopted at the time of writing. According to Sherah Farris, director of Haven of the Ozarks, promoting the shelter through weddings helps boost donations. "They all did so well and stood right by the bridesmaids and groomsmen as we said our vows," Burky said.
Sally Burky

Farris said that another couple had incorporated dogs from the Haven into their wedding in the fall.

"Their wedding was beautiful and the dogs had a blast!" Farris said. "We raised over $2,000 (R29,000) there and it seems to have started the wedding adoption trend!"

Farris told INSIDER that the shelter is in the early stages of purchasing a new van, which it would use to bring pets to the veterinarian or to larger cities for mobile adoptions. The Haven's current van, which is more than 10 years old and "very faulty," costs around $30,000 (R439,000) to replace.

"The current one is on its last leg," Burky said. "It's vital for them to travel to bigger cities to get those animals homes."

Yazzy, the only dog from Burky's wedding who has yet to find a home, is a six-year-old terrier whose owner passed away. 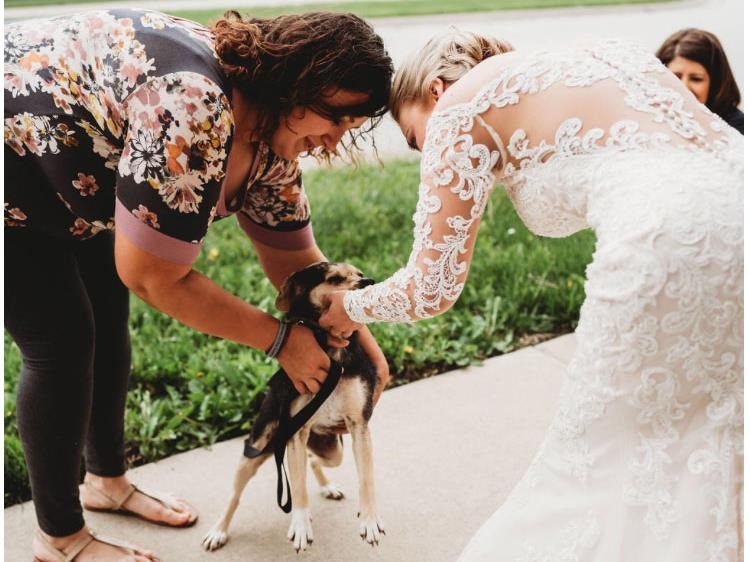 "It would make Cary and me so happy if we could aid in finding her a family," Burky said.

You can read more about Yazzy and Haven of the Ozarks or make a donation on the shelter's website.