British Foreign Secretary Boris Johnson lashed out at Prime Minister Theresa May's Brexit plans in his letter of resignation, saying that Britain is "truly headed for the status of colony" and that the "dream" of Brexit "is dying."

On Monday, the Conservative MP became the third minister to resign from the Cabinet in recent days over Britain's plan for exiting the European Union, throwing British politics into chaos and raising the spectre of a potential Conservative leadership challenge or general election.

May's Cabinet agreed on Friday on a relatively "soft" Brexit proposal that would result in close ties between the EU and the UK, as well as a free trade area for goods.

Johnson agreed to it at the time but has since reneged on his decision, writing: "On Friday I acknowledged that my side of the argument were too few to prevail, and congratulated you on at least reaching a Cabinet decision on the way forward. As I said then, the Government now has a song to sing.

"The trouble is that I have practiced the words over the weekend and find that they stick in the throat. We must have collective responsibility. Since I cannot in all conscience champion these proposals, I have sadly concluded that I must go."

In his resignation letter, Johnson harshly criticised the government's approach to Brexit, saying: "Brexit should be about opportunity and hope. It should be a chance to do things differently, to be more nimble and dynamic, and to maximise the particular advantages of the UK as an open, outward-looking global economy.

"That dream is dying, suffocated by needless self-doubt."

In response, Theresa May said she was "sorry — and a little surprised — to receive" Johnson's resignation, "after the productive discussions we had at Chequers on Friday, and the comprehensive and detailed proposal we agreed as a Cabinet."

She added: "If you are not able to provide the support we need to secure this deal in the interests of the United Kingdom, it is right that you should step down." 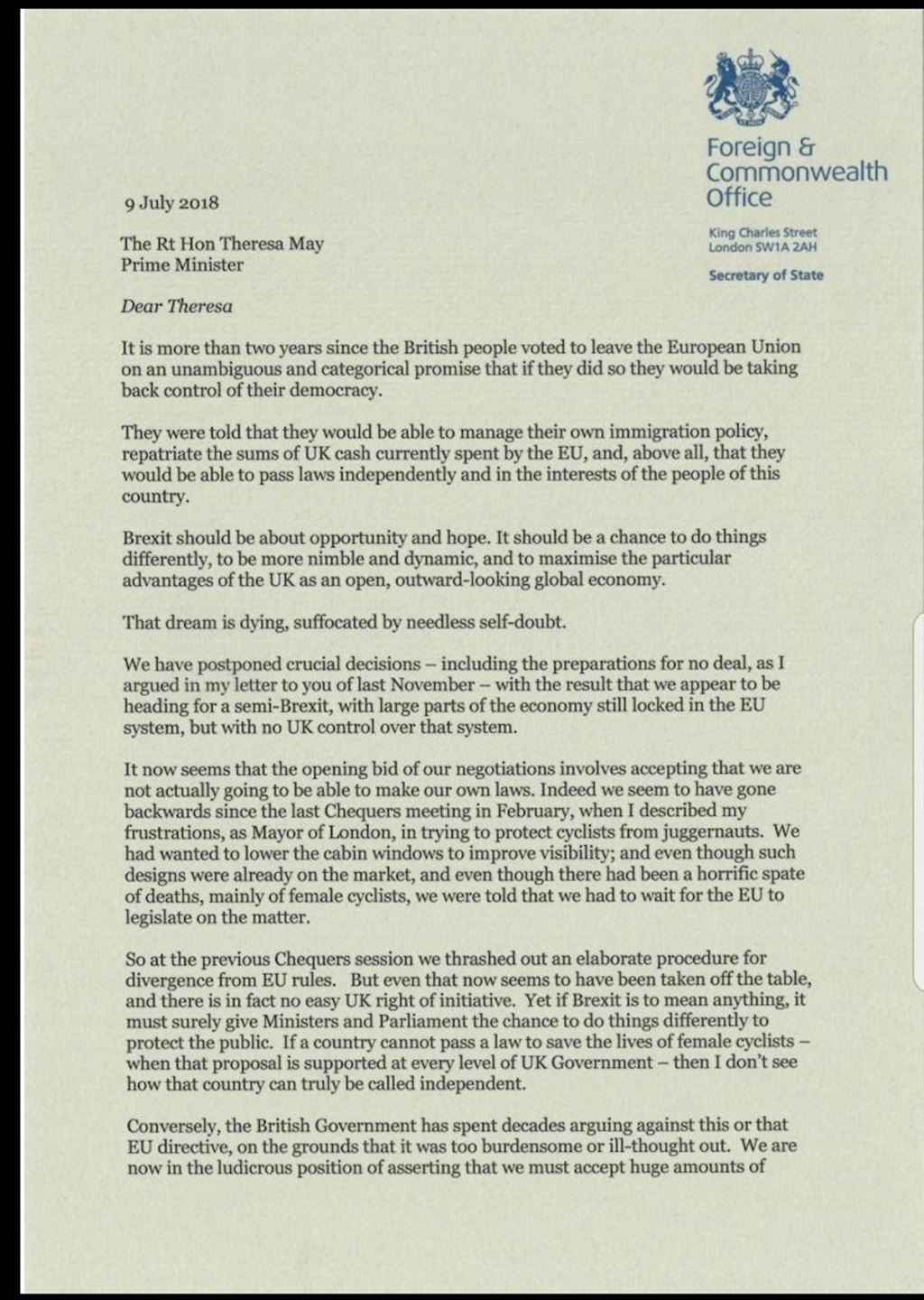 And here is Theresa May's response: Related Links
Jaguar Land Rover says 40,000 UK jobs and over R1.4 trillion of investment are threatened by a...
The EU is privately telling European countries to prepare their airports for a no-deal Brexit
Airbus is reportedly thinking of pulling investment from the UK if there's a no-deal Brexit
Next on Business Insider
Japan is encouraging young people to drink more alcohol to help boost its economy