There is a 90% chance Boris Johnson will break his 'no-deal' Brexit promise, according to these numbers With the United Kingdom's new prime minister, Boris Johnson, promising to deliver Brexit by October 31 "do or die," it looks increasingly like the UK will leave the European Union without a Withdrawal Agreement. That will dislocate its economy from its richest, largest, and closest trading partner, and possibly plunge it into a major recession.

Analysts are making "no deal" their base case. Wells Fargo's Erik Nelson puts "no deal" at a 40% probability. Oxford Economics' Martin Beck has it at 30%.

But Pantheon Macroeconomics' Samuel Tombs - a contrarian who correctly predicted that Theresa May would lose seats in the 2017 election when most people thought she would gain them - believes the odds are still against Johnson.

The prime minister has a technical majority in the House of Commons of only about three votes. The Conservatives face upcoming by-elections in Dover, Brecon & Radnorshire, and Sheffield Hallam. They could easily lose two or more of those contests. The first, in Brecon & Radnorshire, will take place later this week.

And with big-name Conservatives like former chancellor Philip Hammond threatening to vote against the government rather than support no deal, it would potentially wipe out Johnson's ability to control the House of Commons.

That scenario would lead to a general election. 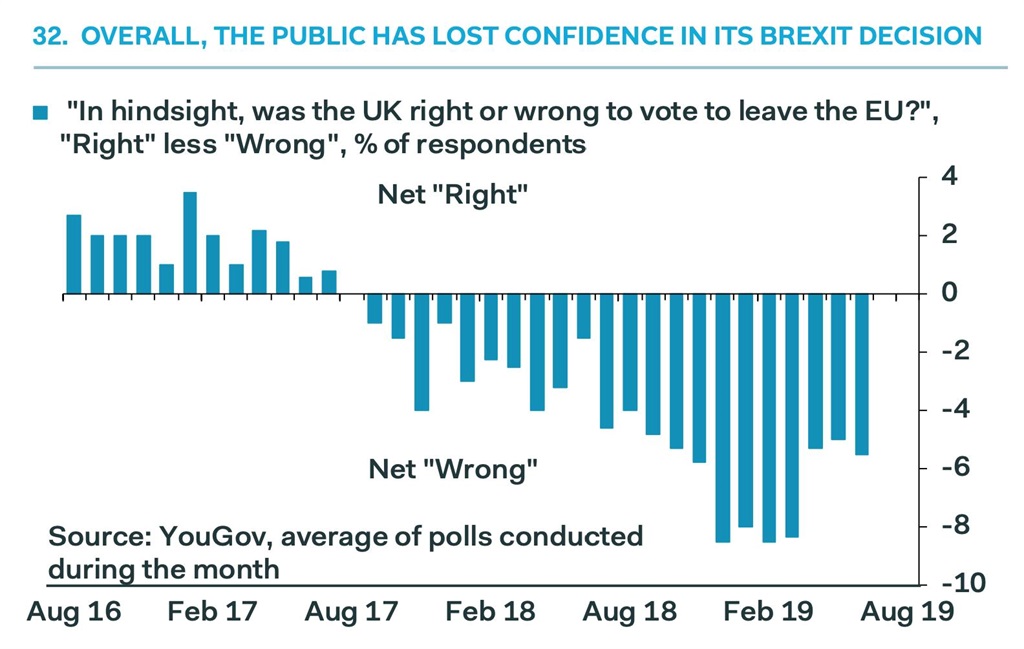 A majority of the British public now favours remaining in Europe.
Pantheon Macroeconomics

With that context in mind, Tombs has crunched the numbers on whether Johnson has enough votes to get a "no-deal" exit through the House:

"Earlier this month, 17 Conservatives rebelled while 19 deliberately abstained in order to stop the new PM from proroguing parliament in October. Some of them, such as Ken Clarke and Guto Bebb, do not intend to stand as MPs at the next election and so have nothing to lose by obstructing Mr. Johnson. Others, such as Phillip Hammond and Dominic Grieve, know they have no chance of returning to government with Mr. Johnson at the helm. And a final group, including Justine Greening and Paul Masterton- who represent Remain-leaning Putney and East Renfrewshire, respectively-have a better chance of holding onto their seats by opposing a no-deal Brexit than by enabling it."

Those Tory rebels are offset by opposition Labour party rebels who support Brexit. However, their numbers are generally smaller:

If a majority in the Commons threatens to topple the government rather than contemplate "no deal," it would force Johnson into a compromise, either proposing his own deal or by extending the Article 50 period, perhaps for a general election that might - might! - give him the majority he needs.

That's why Tombs thinks there is a 90% chance that "no deal" will never occur.

"In our view, the chances of a no-deal Brexit on October 31 have not surged just because ?Boris Johnson has become Prime Minister and is gesticulating wildly at the Despatch Box. We still think a no-deal departure in October is [only] a 10% risk," Tombs told clients in a note seen by Business Insider.

Related Links
The EU's chief Brexit negotiator said Boris Johnson's demands are 'unacceptable'
Boris Johnson said he was a 'fan' of the EU and wanted Britain to stay in the Single Market after...
Boris Johnson's plan to force through Brexit could be ruled illegal by a Scottish court
Next on Business Insider
Cristiano Ronaldo has been eating alone at Manchester United, report says - manager may let him leave