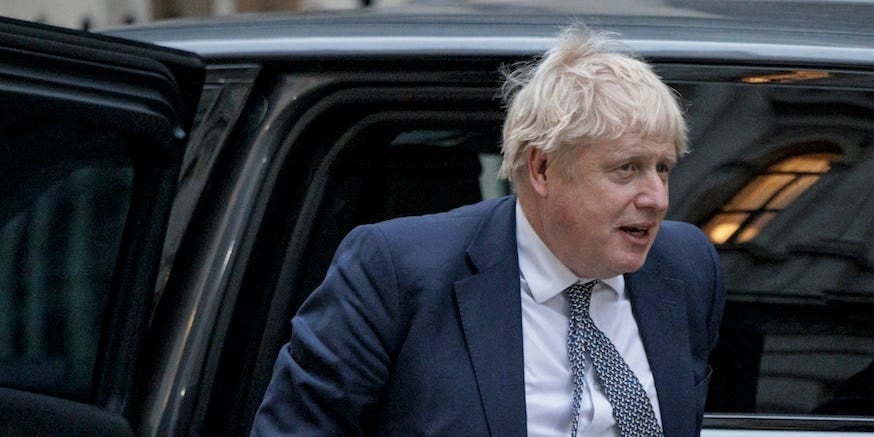 Boris Johnson accused the European Union of acting in an "insane and pettifogging way" over how it was implementing post-Brexit trading arrangements between Northern Ireland and Great Britain.

During Prime Minister's Questions on Wednesday — where he defended himself from calls for his resignation amid the ongoing row over Downing Street parties — he said he felt "indignation" about the way the EU was implementing the Northern Ireland protocol, part of the Brexit deal he agreed in 2020.

"The EU is implementing this in an insane and pettifogging way. And we need to sort it out and I completely support what he's saying," Johnson said in a response from DUP leader Jeffrey Donaldson.

He said hundreds of businesses had stopped trading across the new sea border between Northern Ireland and Great Britain, adding: "We need to sort it out."

The UK is trying to make significant changes to the Northern Ireland protocol, which was introduced to ensure that goods continued to move freely across the border between Northern Ireland and the Republic of Ireland.

The prime minister's comments risk inflaming tensions between London and Brussels, where Foreign Secretary Liz Truss held talks this week with her EU counterpart over the Northern Ireland protocol.

Johnson faces another perilous week as he awaits the publication of a potentially damning report into allegations that Downing Street officials held numerous rule-breaking parties during national lockdowns.

The report — which could be published as soon as Wednesday — runs concurrently with a police investigation into the parties announced by Metropolitan Police Commissioner Cressida Dick on Wednesday.

During PMQs he sought largely to avoid questions on the party scandals. He called Labour leader Keir Starmer a "lawyer not a leader" and appeared to accuse Ian Blackford, the Westminster SNP leader, of being fat.