There's a bookstore in an abandoned house on a paddy field in China, and it's a book lover's dream destination The exterior of Paddy Field Bookstore.

Even in the digital age, there's something magical about going to a bookstore. Some are ancient and dusty. Some are new and sleek, and some are unexpectedly built inside giant, abandoned houses.

The Paddy Field Bookstore, located in the Xiadi village in China, is a bookstore unlike any other. Surrounded by paddy fields, this abandoned house has been redesigned to cater to a book lover's needs.

The Paddy Field Bookstore is located on the northern side of the Chinese village Xiadi. Xiadi is in China's Fujian province, which is close to the bordering island country of Taiwan.

The bookstore gets its name from the paddy fields that surround it. It creates a picturesque scene for book lovers.

The village of Xiadi, where the bookstore is located, is over 800 years old. Traditional buildings built with rammed earth walls are reminscent of the Ming and Qing dynasties.

Rather than tear down the village's 60 dilapidated buildings, volunteers have been renovating and restoring them. New buildings are built away from the older ones, and many of the traditional structures such as ancestral halls and temples are still in use.

One of the renovated buildings is the bookstore. All that remained of the building was three rammed earth walls and a couple of courtyards that had fallen into disrepair.

It stocks over 7,500 titles ranging from art to social sciences. 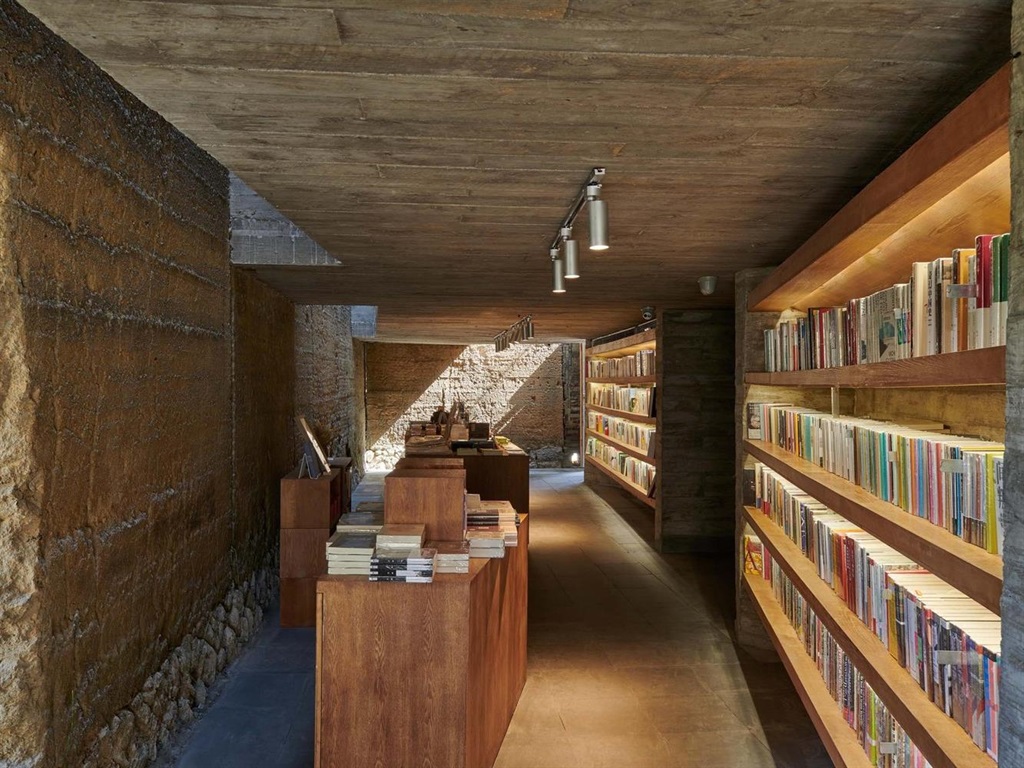 A staircase provides a bench for people to sit and acts as a bookshelf. The design of the roof allows for a natural lighting.

From the outside, you wouldn't know a sleek bookstore was inside. The bookstore was designed by the Trace Architecture Office.

The interior has been separated from the rammed earth walls in spaces, creating gaps. While there are intimate reading areas, these open up to a larger theater space as well as a cafe. The architects wanted visitors to be constantly surprised as they tour and explore the spaces.

The cafe sits on the western cantilever area of the building. With glass windows, the space allows visitors a view of the surrounding village while they sit and eat. The umbrella-style roof design allows visitors a view of the village while keeping the traditional structure of the house. It also protects them from the rain.

The Paddy Field Bookstore is run by an independent bookstore, Librairie Avant-Garde. Librairie Avant-Garde is known for shops in some pretty strange places. It's Nanjing, China, location is in a former bomb shelter.

Related Links
The former CEO of Exclusive Books now owns part of CNA – here’s how he wants to change the shops
Barack Obama just shared his 19 favourite books from 2019
Huawei combats illiteracy through its “Today’s Readers, Tomorrow’s Leaders” initiative
Next on Business Insider
WATCH | Cape Town is trying to guard the sea from plastic with nets made by shark experts