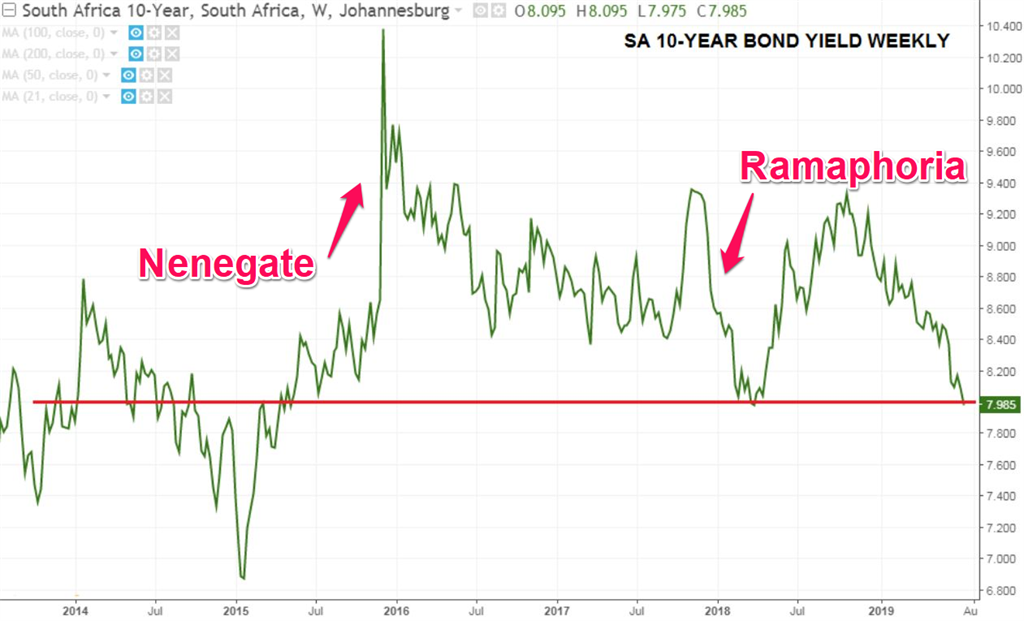 On Tuesday the 10-year South African government bond yield broke through 8% – a level last seen briefly in March 2018, at the height of Ramaphoria, after Cyril Ramaphosa became President.

We have not seen SA government bonds below 8% on a sustained basis since prior to Nenegate, remarked the trader Karin Richards on Twitter, referring to then President Jacob Zuma's firing of finance minister Nhlanhla Nene, which triggered a massive spike in government bond yields, in 2015.

Bond yields are important because they guide the interest rates the government ends up paying to borrow money.

See also: Foreigners dumped billions in South African bonds in the days before the elections – but now they are piling back in

If bonds yields are high, government will have to borrow money at higher interest rates.

A bond is like an IOU, with the borrower agreeing to repay an amount plus interest.

Government bonds are issued by countries, which promise to repay an amount at a fixed rate of interest at a specific time. The 10-year government bond, for example, will be repaid in 10 years.

After a government issued the bonds, they are bought and sold by investors to other investors in the market.

This means the state would have to pay billions more in interest, at the cost of investments in local roads, hospitals, and services. Lower rates mean government will save money.

Why are government bonds rallying?

The rally has virtually nothing to do with positive developments in South Africa, unfortunately.

Foreign investors are searching for places to park their money and earn some proper interest.

Bond yields in some of the world’s richest countries are imploding, says Izak Odendaal, investment strategist at Old Mutual Multi-Managers. Already, $12.5 trillion of bonds from Europe and Japan trade at negative yields according to Bloomberg. In effect, lenders are paying these governments to borrow from them.

The US central bank looks set to cut interest rates at the end of the month, which sent the US 10-year Treasury (government bond) to 2% for the first time since late 2016.

By comparison, the interest rates on offer in South Africa still look attractive, which are bolstering demand for our government bonds.

What impact will the lower government yields have?

The lower yields on South Africa government bonds will mean that new government debt will have lower interest rates.

On the total projected government borrowing of R335 billion for the current fiscal year, a one percent change in the interest rate could save government a few billion rand, says Odendaal.

“It’s positive and will take some pressure off government, but bond yields will have to fall much lower to make a difference to the fiscal situation.”

Odendaal points out that local government bond yields are still relatively high. Investors continue to be nervous about a credit rating downgrade: if South Africa loses its investment-grade rating from Moody’s, our bonds will be kicked out of a key international index of bonds. This will mean that some international investors may not invest in South African bonds any more, and will trigger sales.

Odendaal believes there is still a 50/50 chance of a Moody’s downgrade.

“But the question is whether it will still matter that much.”

South African bonds are already very cheap, and trade at higher levels than other countries with worse credit ratings.

“Ultimately, investors are buying South African bonds because of interest rates and not because the bonds are investment grade,” says Odendaal.

The Reserve Bank is expected to cut interest rates by at least 25 basis points on Thursday, which probably won’t dent the demand for SA bonds, he believes.

Another impact is a stronger rand.

As foreigners pile into local bonds, they have to buy rand to get their hands on the domestic investments.

The rand was last trading at R13.90/$ on Tuesday, around its best levels since February – and far away from the R15.40/$ it reached barely a month ago.

This scenario of a stronger rand and lower bond yields could provide a window of opportunity for Ramaphosa to implement difficult reforms needed for long-term growth, says Odendaal.

“Job cuts at Eskom to improve its financial sustainability is an obvious example of a painful but probably necessary reform.”

Related Links
A SA interior design firm has again been named one of the world’s best – here are some of the...
The company behind Castle and Black Label said it won't take its Asia unit public, cancelling the...
Why the rand is starting to wear its underpants outside its trousers
Next on Business Insider
The US and allies have reportedly floated capping Russian oil prices at as low as $40 a barrel