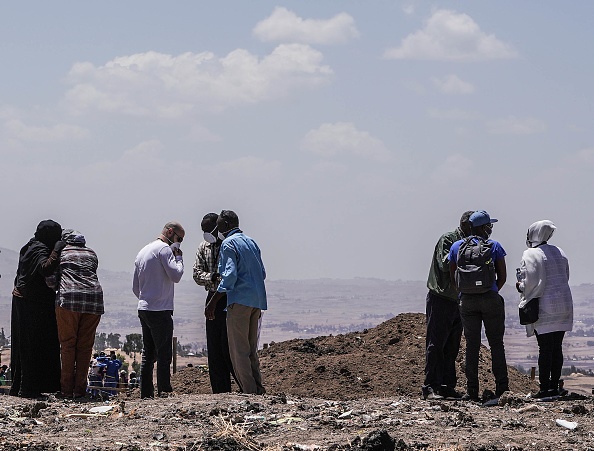 A group of British nationals pause at the edge of the crash site to pay their respects to loved one lost on Ethiopian Airlines flight 302 during the Asrahhullet or Tulluferra ceremony on March 21, 2019 in Ejere, Ethiopia. In the Ethiopian Orthodox church tradition the Asrahhullet or Tulluferra Ceremony marks the 12th day since the passing of a member of the community. People from the various hamlets and villages around Ejere came together to pay respects to the 157 souls who perished in the crash of Ethiopian Airlines flight 302 which crashed on March 10, 2019. (Photo by Jemal Countess/Getty Images)

Boeing is facing mounting pressure over its flight safety systems with its shares tumbling as investors react to fresh allegations about its Boeing 737 Max aircraft.

Ethiopia's Transport Minister Dagmawit Moges said that "the crew performed all the procedures repeatedly provided by the manufacturer but was not able to control the aircraft." She delivered a report outlining last month's crash on Thursday. The Ethiopian Airlines flight went down despite pilots' attempts to follow the emergency instructions Boeing had provided, leading to the death of 157 people.

Boeing shares are down 0.8% in premarket trading as of 11.35 a.m in London (6.35 a.m ET). Boeing shares fell 1.5% Wednesday after a Wall Street Journal report which detailed information released by the Ethiopian government Thursday.

The preliminary report puts increased pressure on Boeing, over its software and how its planes are certified. Moges said that the plane was in a "repetitive uncommanded nose-down" position, a position that is widely believed to have been caused by the plane's MCAS anti-stall software system.

It follows a similar crash in Indonesia last year when a Lion Air flight carrying 189 passengers crashed killing all on board. A preliminary report into the Lion Air 737 Max's fatal crash in October 2018 suggested that the MCAS system contributed to the plane crashing into the sea.

After the Lion Air crash, Boeing and the US Federal Aviation Administration sought to highlight procedures meant to solve any problems with the MCAS software. Those procedures involved disabling MCAS by cutting its power.

The 737 Max was grounded around the world after the Ethiopian Airlines disaster.