The first flight of the Boeing 777X.
Stephen Brashear/Getty

The third of Boeing's history-making newest plane just took to the skies.

The Boeing 777X became the newest aircraft to grace the skies above Washington state in January when the experimental aircraft lifted off from Paine Field in Everett following a day of delays due to weather. After three months of test flights with one aircraft, the second 777X took flight on April 30 and now, a third aircraft has taken its maiden flight in a new milestone in the program.

The 777X is the first next-generation variant of Boeing's popular 777 product line, which first flew in the 1990s and currently sees service with the world's leading airlines. Equipped with new engines developed by General Electric and a longer pair of wings, the aircraft aims to carry more passengers while operating more efficiently than its predecessor aircraft, effectively replacing the Boeing 747 Jumbo Jet.

When it first took flight in January, the 777X became the largest twin-engine jet aircraft to ever fly. Though a milestone aircraft for Boeing, its initial debut last year was hampered by the crash of an Ethiopian Airlines Boeing 737 Max 8 and the subsequent worldwide grounding of the plane due to issues with the aircraft's software stemming from its development.

Take a look at the plane Boeing hopes will be its redemption.

Boeing's 777 became popular in the mid-90s as the next step up from its 767. Large twin-engine aircraft were gaining popularity due to their efficiency and changing attitudes toward their safety.

Fast-forward to more recent days: Boeing looked back to its famous 777 to see if it could be improved using technology from its latest widebody, the smaller 787 Dreamliner. Just like the aircraft that came before it, Boeing would create two variants, the -8 and -9. The -9 aircraft would be the first to be manufactured, with production beginning in October 2017. At 77 metres in the length, the aircraft would be the largest twin-engine aircraft to roam the skies.

Its wingspan is almost as wide as the aircraft is long — wingtip to wingtip it spans 65 metres.

The aircraft has two different wingspan lengths thanks to a unique feature of the aircraft: the wingtips extend flat before takeoff to improve fuel efficiency.

Pilots activate the function via a switch in the cockpit and retract them right after landing to avoid hitting anything on the ground.

The wingspan with the extended wingtips is 71 metres, nearly enough to fit two Boeing 757 aircraft back to back.

While the range of the new -9 and the last generation 777-300ER are comparable, the draw to the new aircraft is its efficiency and extra carrying capacity.

The aircraft's increased efficiency and similar range to its predecessors despite the additional load are made possible thanks to General Electric Aviation's GE9X engines. The huge engines are large enough for a Boeing 737 fuselage to fit inside.

The fuel-efficient measures of the aircraft lead Boeing to boast that it will offer 10 percent less fuel burn, emissions, and operating costs. Boeing also estimates that the -9 can carry 426 passengers in a two-cabin configuration, 30 more than the -300ER. 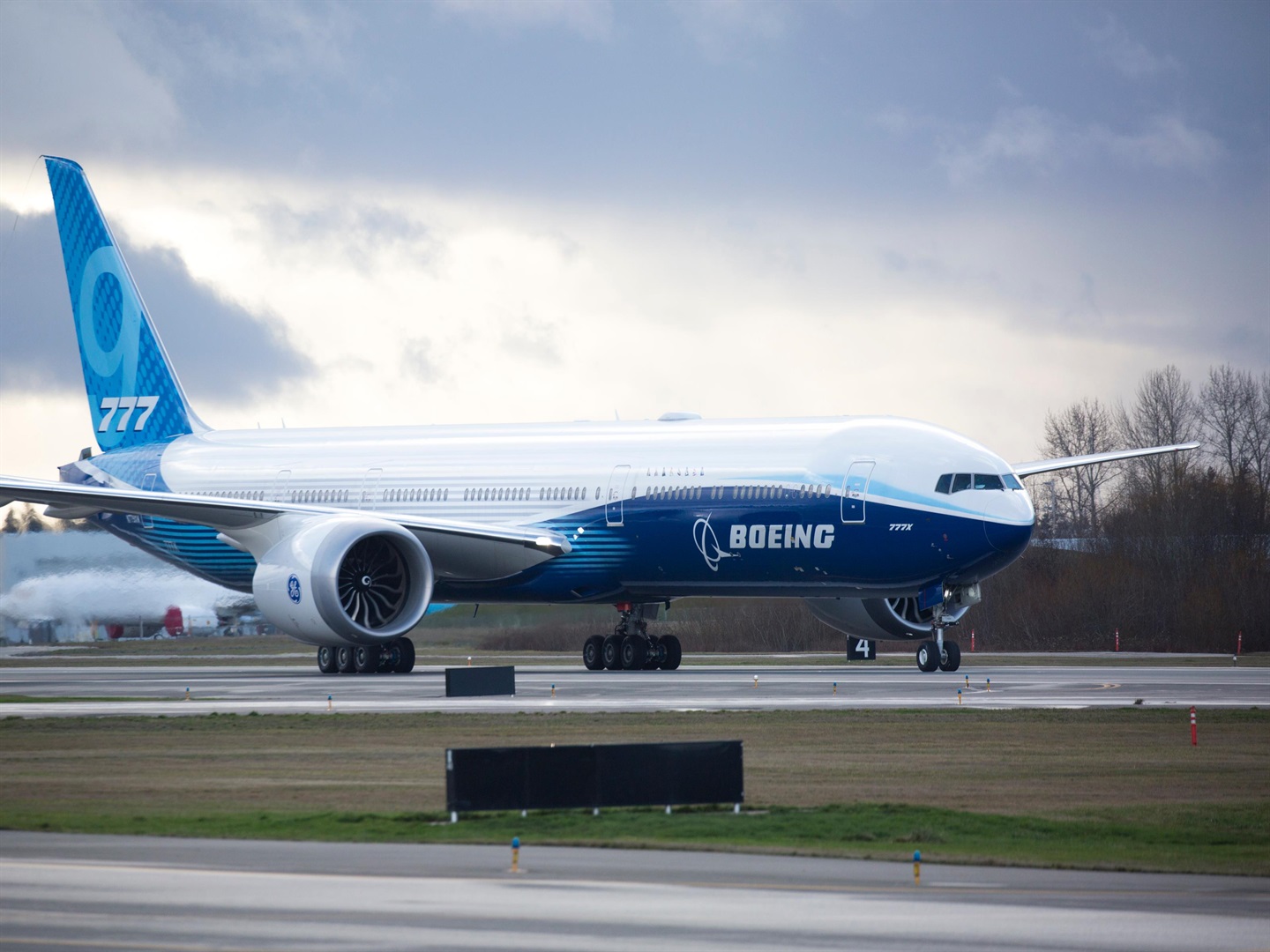 Its first flight was scheduled for January 24, 2020, three years after production began. That flight was scrapped, however, due to bad weather in the area.

The next day, with the sun shining, the aircraft successfully departed from Paine Field north of Seattle and away from the grounded Max aircraft at Boeing Field. A monumental day for Boeing, the aircraft performed routine tests before heading back to Seattle. But not before stopping for a photo with Mt. Rainer, a Boeing staple. The second 777X built by Boeing took flight on April 30, flying for just under 3 hours on its first trip to the skies. The second of four flight test aircraft, this plane will test the 777X's flight handling characteristics and performance capabilities. Boeing flew the plane from its birthplace at Everett, Washington's Paine Field to Seattle's Boeing Field. A third aircraft took flight on August 3, departing from its home at Paine Field and heading as far south as Salem, Oregon before heading home via Spokane, Washington and a few touch-and-go maneuvers at an airport in Moses Lake, Washington. This test aircraft will focus on the auxiliary power unit – known as the third engine as it provides additional energy for functions such as engine start – as well as the aircraft's avionics, flight loads, and propulsion performance. Instead of the Boeing house livery that its predecessors wear, the third aircraft's fuselage is nearly all white with the Boeing logo and other small lettering and branding providing the only colour. The tail, however, remained the same. 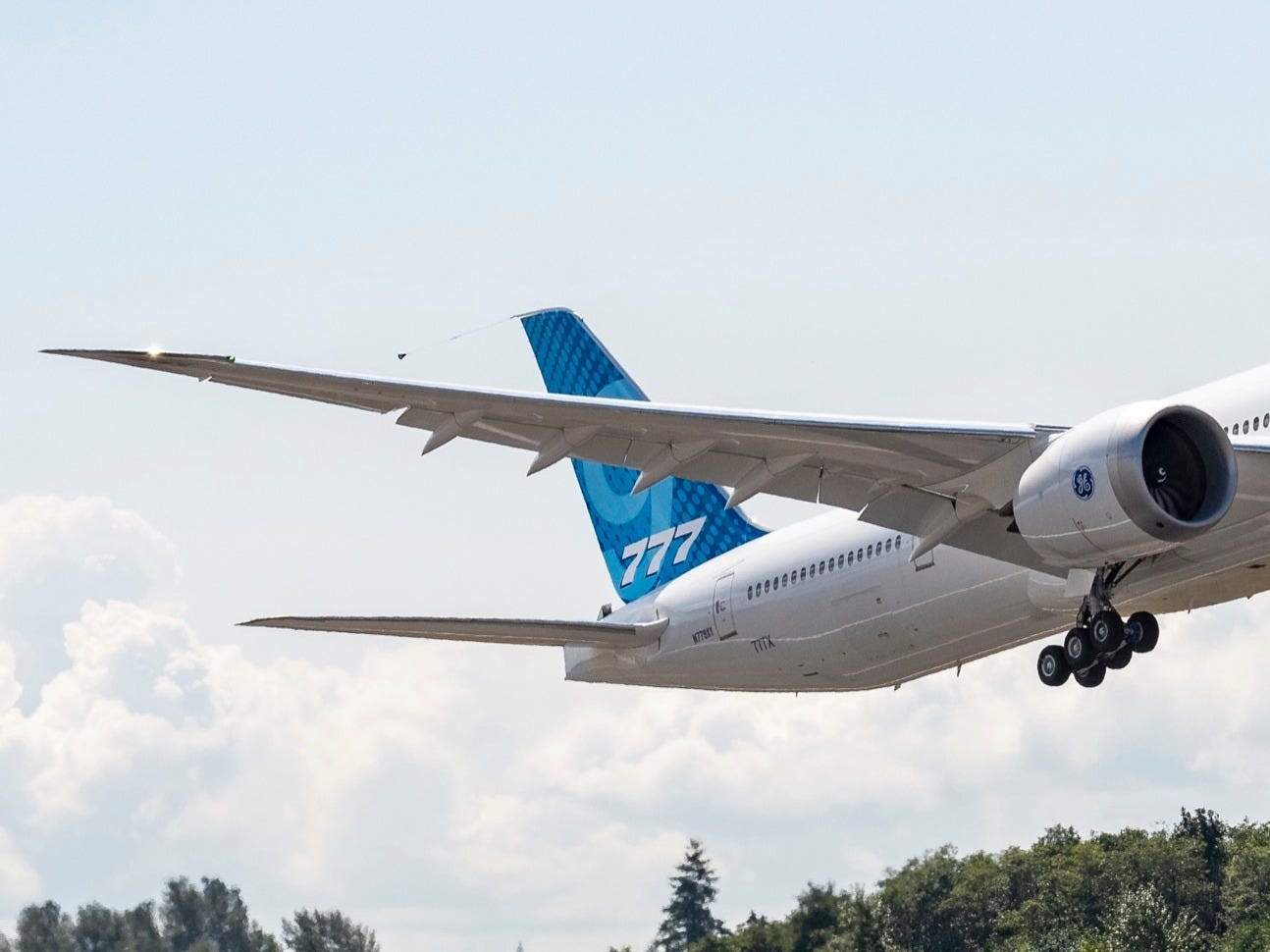 The aircraft will continue test flights until it receives certification from the world's aviation regulatory agencies. So far, Boeing has logged around 100 hours of test flying with the new type. When it does receive the certification, expected to be rigorous following the issues exposed with the Boeing 737 Max certification, deliveries can begin to customers, with Emirates first on the list. As is Boeing's custom, painted on the side of the fuselage of the test plane is the tails of each airline that has an order in for the plane. The cost per plane stands at R7.7 billion, but some airlines receive discounts for buying in bulk. For the majority of the airlines in the list, an Airbus aircraft serves as the flagship, though the 777X will likely take that spot. The first delivery – and likely the first passenger flight – of the aircraft is expected for 2022 following pandemic-related delays. Until then, Boeing can revel in its accomplishment as its the next step towards redemption for the troubled manufacturer.