Black Friday 2020: These malls were the big winners - and losers Small malls were less affected, but across South Africa there was a steep fall in in-store shopping on Black Friday, new data from the property analytics firm Lightstone, and the vehicle tracking service Tracker have confirmed.

In-store card purchases on Black Friday (27 November) numbered just under five million, bank transaction clearing house BankServAfrica previously reported – a fall of 30% compared to 2019. Online transactions, by contrast, spiked by more than 60% – but couldn’t make up for the in-store decrease.

According to Linda Reid from Lightstone, data provided by Tracker indicates that the traffic to shopping centres was 13% lower than last year, and only 20% higher than a “normal” Friday.

Smaller malls fared better than larger ones: they saw 10% less traffic on Black Friday compared to last week, while the larger malls lost 20%.

“The more limited drop at smaller sized malls could possibly be attributed to pandemic crowd avoidance, but it may also be indicative of a shift from Black Friday shopper behaviour around bulk buying, given the current economic constraints shoppers face, as these smaller malls tend to be anchored by grocery stores,” says Colin Hundermark, executive: corporate development at Tracker South Africa.

Stand-alone retailers that offer Black Friday deals like washing machines and television sets fared the worst with a 25% decrease in volume compared to 2019. 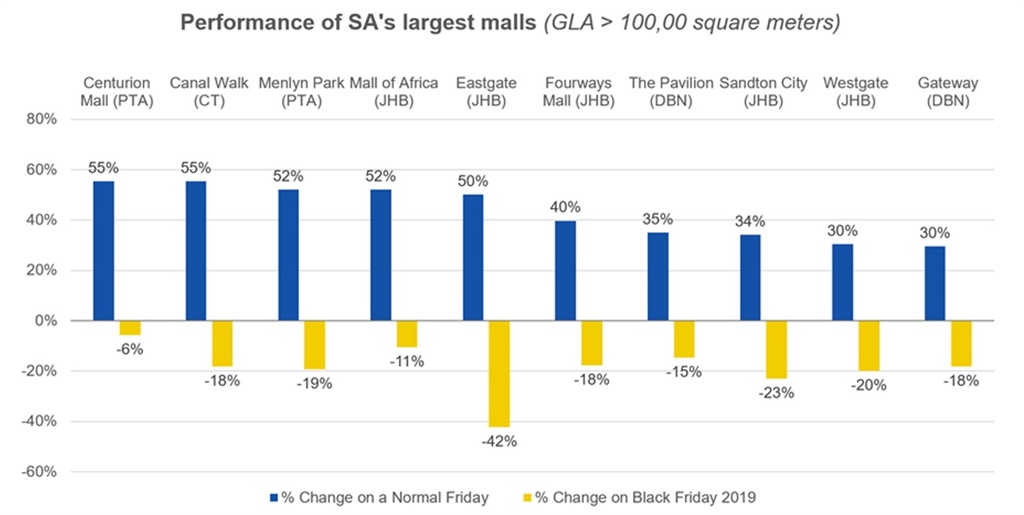