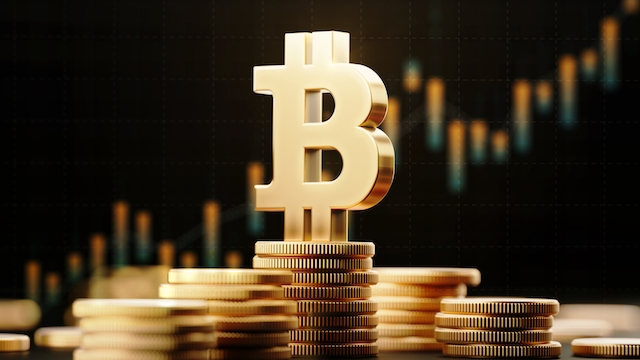 (iStock)
Investors appear to be treating bitcoin as a haven asset similar to gold, given the volume of cryptocurrency trading has increased during the conflict.

Gold - a popular asset to hold during times of uncertainty - rose by a less dramatic 73% over the same period.

Trading of bitcoin more than doubled during certain key moments of the trade war, the data showed -usually after tensions calmed.

Three examples from this year, highlighted by eToro were: Both gold and bitcoin's open positions have experienced spikes
eToro

The number of open positions in both bitcoin and gold have increased as the US-China trade war has escalated and the world's two largest economies have slapped tariffs on each others' goods, Simon Peters, analyst at eToro, told Business Insider.

Gold's scarcity, utility, and intrinsic value aren't affected by central banks' interest rate decisions. As a result, the metal has historically served as a haven for investors during times of economic and political turmoil, Peters added.

"Bitcoin, by comparison, shares similar characteristics to gold in that there will only ever be a finite amount in existence (21 million), it's decentralised, its price is not affected by inflation, and it has the added benefit over gold of lower storage costs."

Bitcoin remains a more volatile asset than gold and faces additional risks, Peters said. However, investors appear to warming up to the cryptocurrency as a haven.

"Extreme price volatility, hacks and allegations of price manipulation still weigh on its reputation," Peters said. "However, the correlation with gold on eToro's platform could be a sign that the overall perception of bitcoin is gradually shifting from speculative towards a lower-risk store of value."