Bitcoin jumps by $2,000 after Elon Musk posts image of crypto-themed ring, makes a reference to dogecoin The price of bitcoin rose by as much as 3% on Thursday after Elon Musk posted a vague tweet with a reference to dogecoin and an image of a crypto-themed ring.

In his tweet, Musk said: "Frodo was the underdoge, All thought he would fail, Himself most of all," seemingly in a reference to the Lord of the Rings trilogy. Dogecoin saw only a 0.8% jump to $0.07, but it's still up 1300% year-to-date. 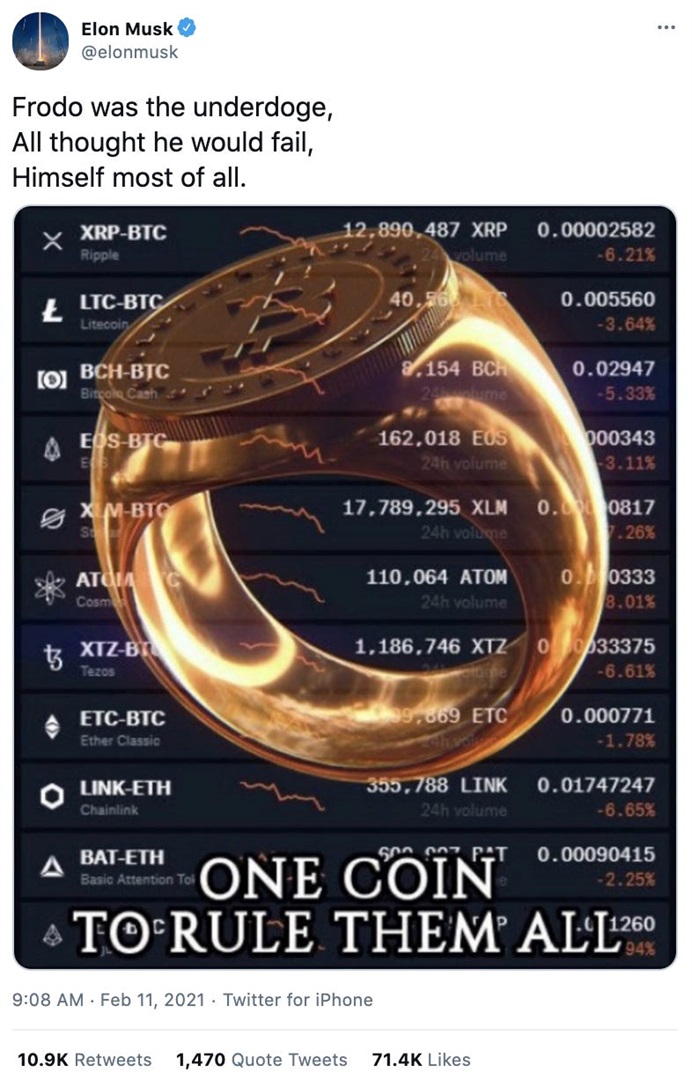 Earlier this week, the token got its biggest endorsement after Tesla disclosed a $1.5 billion bitcoin investment. "These are just the early innings of corporate adoption, as digital currencies are beginning to play a larger role in robust balance sheet management," said Nathan Cox, chief investment officer at investment firm Two Prime.

One analyst said Tesla's decision was a massive win for the crypto crowd and acceptance within the financial community is what it has long sought - and this move ticks both of those boxes.

"It seems that one thing more powerful than Elon Musk's Twitter account is the financial power of the company he co-founded and leads," said Craig Erlam, senior market analyst at OANDA. "I'm a little surprised it wasn't enough to push $50,000 if I'm honest, but it's surely only a matter of time. There doesn't appear to be much appetite to sell at this point."