A closely followed technical sell signal was triggered in bitcoin over the weekend, suggesting there's more downside ahead for the popular cryptocurrency.

The lagging crossover indicator can help alert traders to securities that are solidifying their uptrend and are likely to experience a continuation, resulting in lower prices. Since bitcoin's death cross on Saturday, the cryptocurrency has sold off by 14% as of Monday morning.

The technical sell signal in bitcoin comes amid negative news flow including China's continued crackdown on bitcoin mining. According to reports, authorities in the Sichuan province ordered 26 bitcoin miners to stop operating.

A Chinese state media outlet reported that more than 90% of China's bitcoin mining capacity was estimated to be closed down, at least for the short term, on Monday.

But despite the negative news flow and bearish technicals, some see the recent decline in bitcoin as a buying opportunity, including MicroStrategy CEO Michael Saylor. MicroStrategy announced on Monday that it acquired an additional $489 million worth of bitcoin, bringing its total holdings to 105,085 bitcoins.

Bitcoin last experienced a golden cross in May of 2020, and since then, the cryptocurrency has surged more than 300%, based on Saturday prices just prior to the death cross signal.

While increased volatility over the past two months has led to a sharp 50% decline in the cryptocurrency, bitcoin is still up about 12% year-to-date. 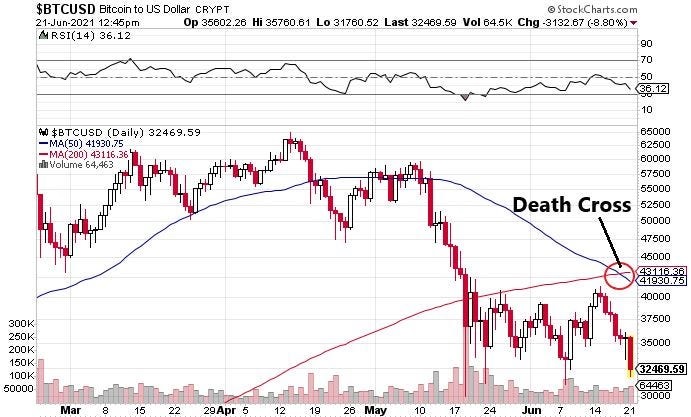