Bitcoin surged more than 5% on Friday night to pass $10,000, marking its recovery to about half of its record high.

By later morning Saturday a single bitcoin was selling for more than R164,000 on South African exchange Luno – a gain of R14,000 for the day.

Naeem Aslam, the chief market analyst at ThinkMarkets UK, wasn't far off the mark when he predicted last month that the cryptocurrency would reach the milestone in early June. At the time, he said it would be "a real embarrassing moment for those who said that the currency will never recover from its losses."

"Once this market builds up a head of steam, it's hard to stop," said Neil Wilson, the chief market analyst for Markets.com, in late May. "This is a big momentum play and the more buzz, the more traders will pile in behind the rising wave."

Wilson didn't expect the recovery to last, but he cautioned against betting on a bitcoin slump.

"Standing in front of a steamroller springs to mind, if you are a natural bear," he added. "Better to wait and let it fizzle out, which it will eventually."

While there isn't a clear catalyst for the price spike, there are several theories. Investors may be fleeing to bitcoin as a safe haven amid rising tensions between the US and Iran and an enduring US-China trade war. The US Federal Reserve's signalling this week that it could cut interest rates as soon as next month, days after the European Central Bank pledged to use rate cuts and asset purchases to support the eurozone's economic growth, have also raised the prospect of cheaper borrowing and greater liquidity in world markets. Those factors have lifted oil and gold prices this week, and bitcoin could be a similar story.

However, bitcoin may have limited value as a safe haven. Research suggests the cryptocurrency is vulnerable to short-term interest rates, expectations of stock-market and foreign-exchange volatility, and other factors that move the prices of mainstream investments.

Another driver could be growing mainstream interest. Fidelity and other brokerages are poised to allow buying and selling of cryptocurrencies on their platforms, while Facebook has recruited blue-chip partners such as Visa, PayPal, Uber, and Spotify to launch its own digital coin.

The bitcoin rally may come as a surprise, however, given the raft of cryptocurrency scandals in recent months. New York Attorney General Letitia James filed a lawsuit accusing the owner of the Bitfinex exchange of "ongoing fraud" and draining at least $700 million from the reserves backing its digital coin, Tether, to cover up $850 million in missing funds. Binance, one of the world's largest cryptocurrency exchanges, announced that hackers stole $40 million worth of bitcoin. 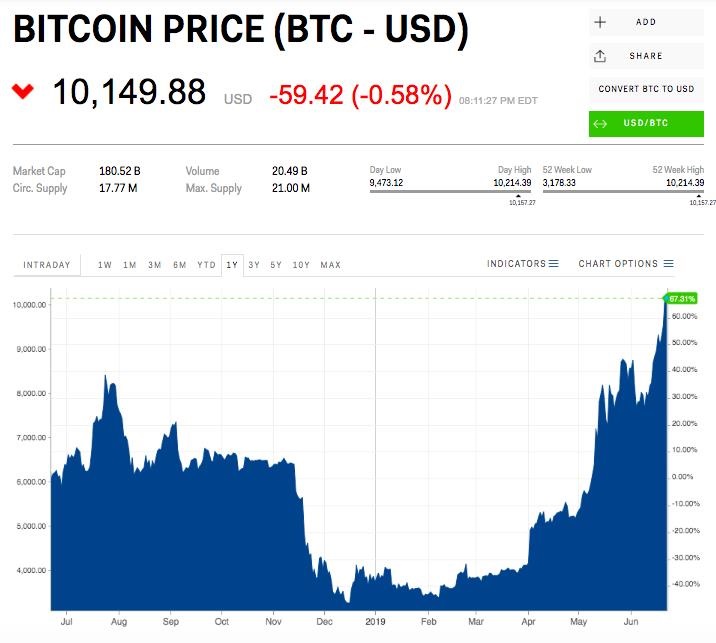