Bill Gates holds up a beaker of human feces at the Reinvented Toilet Expo in Beijing on November 6, 2018.
Bill and Melinda Gates Foundation

Earlier this month, he got onstage in front of business leaders, investors, and government officials from around the world and unveiled what he politely referred to as a "little exhibit." It was a glass jar filled with human faeces.

"It's good to be reminded, in there could be over 200 trillion rotavirus particles, 20 billion Shigella bacteria, and 100,000 parasitic worm eggs," Gates told the crowd, which had gathered in Beijing, China, for an event called the Reinvented Toilet Expo.

The jar of poo was used to make a point: Around the world, in places without proper sanitation or sewage systems, there's much more than a jar's worth of unsanitary human waste sitting around.

"That's what kids, when they're out playing, they are being exposed to all the time," Gates said, noting the link between bad sanitation and disease, death, and malnutrition.

To address that problem, the Bill and Melinda Gates Foundation started its Reinvent the Toilet Challenge in 2011. The initiative funded $200 million in grants for universities around the world to develop a next-generation toilet. The goal: develop a waste-processing system that doesn't need to be hooked up to a typical sanitation and sewer grid.

New systems that have been created with those grants turn what we put into the toilet into fertilizer, energy, or recycled water - some of which is good enough to drink.

The Gates Foundation now intends to invest an additional $200 million into research that can yield additional ways to deal with human waste at the source.

The problem with the toilets we have now Malickane Gueye stands with his children in front of a newly constructed toilet at his home in Dakar, Senegal on September 25, 2018.
©Gates Archive/Sam Phelps

In 2015, the World Health Organization estimated that just 39% of the world's people were using a "safely managed" lavatory, whether it be a toilet or a decently clean latrine.

Living without a good toilet can be unsafe. People who come in contact with faecal matter face a risk of deadly infections and chronic health problems, since human faeces carry pathogens like E. coli, Streptococcus, hepatitis A and E, and more. Those can cause pneumonia and diarrhoea - the top two killers of kids around the world.

Plus, if people don't have a place to go at home, they have to travel alone into woods or a field to relieve themselves, which can be risky for women and children living in conflict zones.

"When you think about things that are basic, right up there with health and enough to eat, I think having a reasonable toilet certainly belongs on that list," Gates said.

He estimates that illness from poor sanitation costs the world over $223 billion per year in lost wages and extra healthcare.

With stratospheric rates of population growth in cities across Africa and Asia, the problem is only set to get worse.

"Unless we do something, the cycle of disease will actually be accelerated," Gates said.

Gates doesn't think it's practical to expect the entire world to connect their homes to yet-to-be-built sewer systems and wastewater-treatment plants. That's why he has been on a quest to do for toilets what he argues Microsoft did for computing: get the business off a centralized, "mainframe" system.

Gates started by asking engineers at universities around the world a simple but unanswered question: "Could you leapfrog the long-accepted 'gold standard' of sanitation?"

"A decade ago, I didn't think I would be able to tell you so much about poop," Gates said.

The first generation of sewer-free toilets is here, but they aren't cheap yet

After seven years and $200 million of investment, the first batch of products from the "Reinvent the Toilet Challenge" is being tested in locations around India, Africa, and China.

One of the first new toilets is the solar-powered Eco-san system, pictured below. Based on technology developed at Cal Tech, the Eco-san extracts clean water from human waste and reuses it for future flushing. 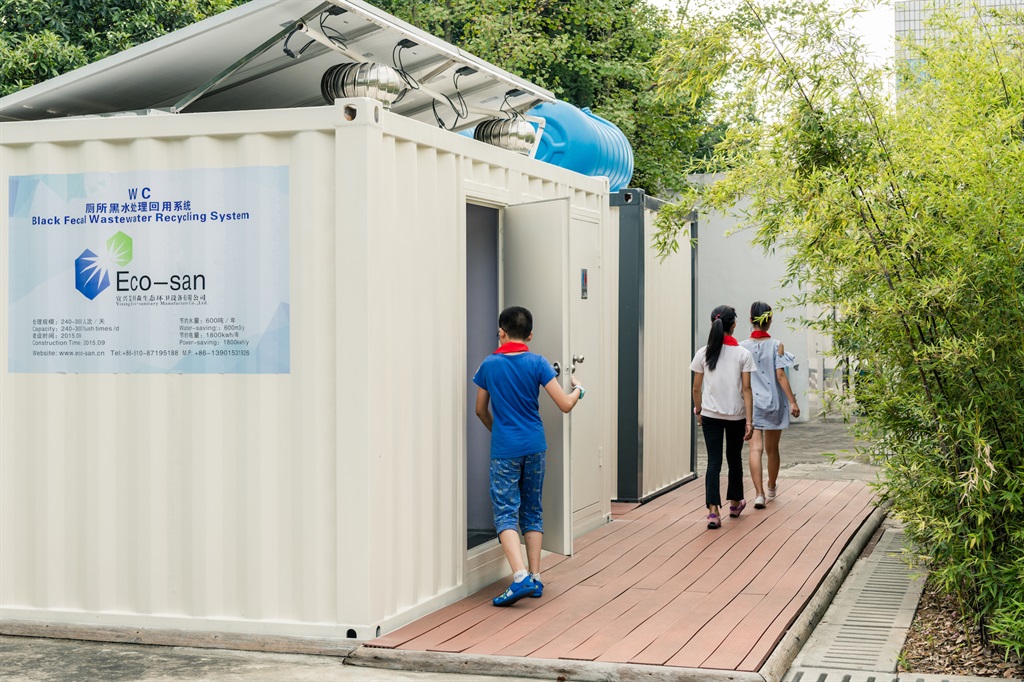 Other models are also in the works from companies and universities around the world.

The University of South Florida's NEWgenerator treatment system also runs on solar energy and can be hooked up to any existing toilet. It uses a nano-membrane filter (kind of like a coffee filter) with faeces-digesting anaerobic bacteria inside to filter clean water out of the waste.

Another toilet from Cranfield University in the UK comes equipped with a little trap-door odour barrier and scraper so that it requires no water for flushing. Clean water is filtered out of waste via a large, orange screw in the tank, and solid waste is burned inside the toilet's combustor, which converts the waste into ash and energy. (Thankfully, this all happens out of sight of the people who are using the toilet.)

"Heat from the burning is used to help dry the next batch of solids," Gates explained in a video. He added, "it's a very clever toilet."

Yet another model, from Swiss engineering firm Helbling, is called the HTClean Toilet, and it functions like a pressure cooker for poo. The immense pressure and heat help the waste separate into water and solids that aren't toxic.

Duke University has also started testing its Gates-funded toilet this year at a textile mill in Coimbatore, India. The system, shown below, separates solid and liquid waste and makes it possible to safely reuse the water for flushing. 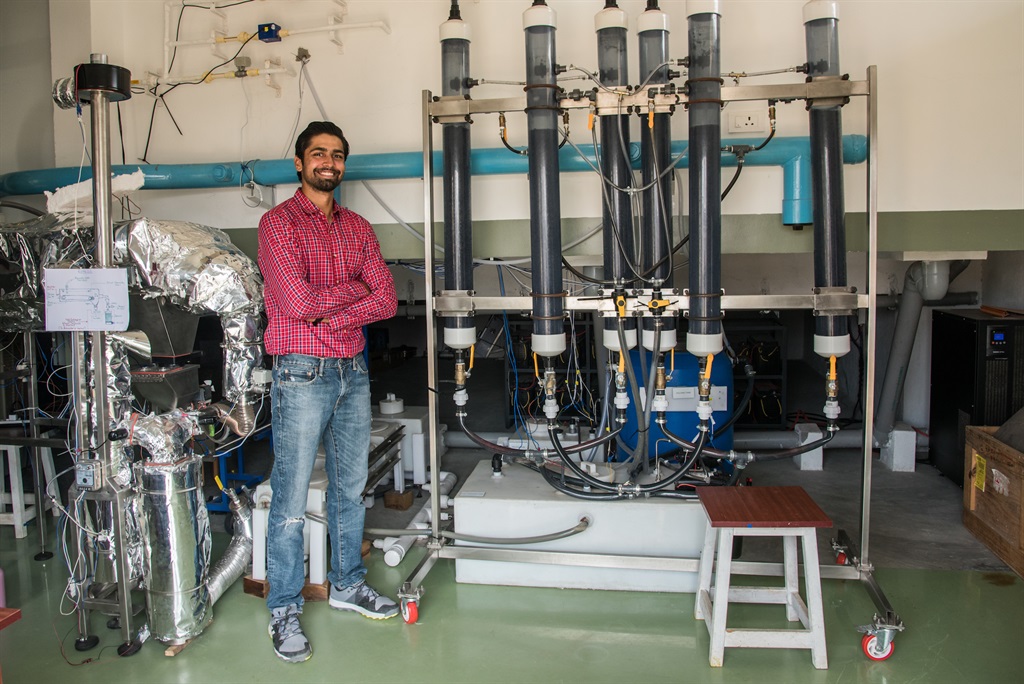 Prateek K, a technical field consultant engineer, stands next to the Duke system, which dries out fecal matter and separates parasitic worms from feces, allowing for water to be recycled or discharged.
©Gates Archive/Ryan Lobo

None of these sewer-free toilets are currently at a price that's feasible for individual homes. For now, the new toilets are going to be used at schools, apartment complexes, and community bathroom areas, Gates said.

But his eventual goal is for off-grid toilets to be used in homes around the world. He told the crowd in Beijing that he's ready to spend an additional $200 million developing the technology for those next-generation toilets. But Gates hopes someday the private sector will start developing sewer-free home toilets and compete to provide those toilets to the 4.5 billion people around the world who don't have them now. Children at the Gugulethu Primary School in KwaMashu, outside of Durban, South Africa. The school is a recipient of a new Eco-san toilet system.
©Gates Archive/Samantha Reinders

Gates is also obsessed with something called an Omni Processor, which is essentially a much smaller version of a waste-treatment plant.

The small plants, one of which is already on the ground in Dakar, Senegal, can serve between 5,000 and 100,000 customers and are completely self-powered. They take in toilet waste, kill pathogens in the sewage, and convert it into "products with commercial value - like clean water, electricity, and fertilizer," Gates said. It's a lot like what astronauts do on the International Space Station - turning their pee into clean, drinkable H2O. Gates is so enthused about the Omni Processor's clean, recycled water that he once drank it himself.

"It tasted great," he told the Beijing crowd. "I'd be glad to do it again any time." Waste collector Assane Cissé (left) and Mariama Seck vacuum human waste from a reservoir inside a courtyard. That waste will then be transported to the Omni Processor in Dakar.
©Gates Archive/Sam Phelps

Gates never thought that he'd turn from a computer whiz into a toilet geek.

"I definitely didn't think that my wife would have to tell me that in some cases I'm talking too much about toilets and how this science of combusting the faeces works," he said.

But he's committed to the task, since better toilets could help save millions of lives and open up an entirely new market.