Every year since 2013, Microsoft cofounder and billionaire philanthropist Bill Gates has held a Reddit AMA (Ask me Anything) session, where anybody on the planet can ask him a question directly.

His sessions garner hundreds of questions across thousands of comments, too many for even him to answer. Gates' answers are sometimes educational, often insightful, and always interesting. There's another constant, too: Every year, Bill Gates posts a new picture or video of himself to the thread as prove that it's really, actually him taking questions. And the man goes all out, showing the world his very particular sense of humour.

This week, Gates kept up the tradition with a short cartoon of all the activities he wouldn't be doing on the day of the question session, and asking Reddit a question of his own.

From 2013 to today, here's how Bill Gates slayed them in the aisles on Reddit. Just don't forget to tip your waiter.

In 2013, Bill Gates held his first Reddit AMA. For his first time out, it was a pretty stripped-down affair, showing off a drawing of himself in the style of "Snoo," Reddit's mascot. 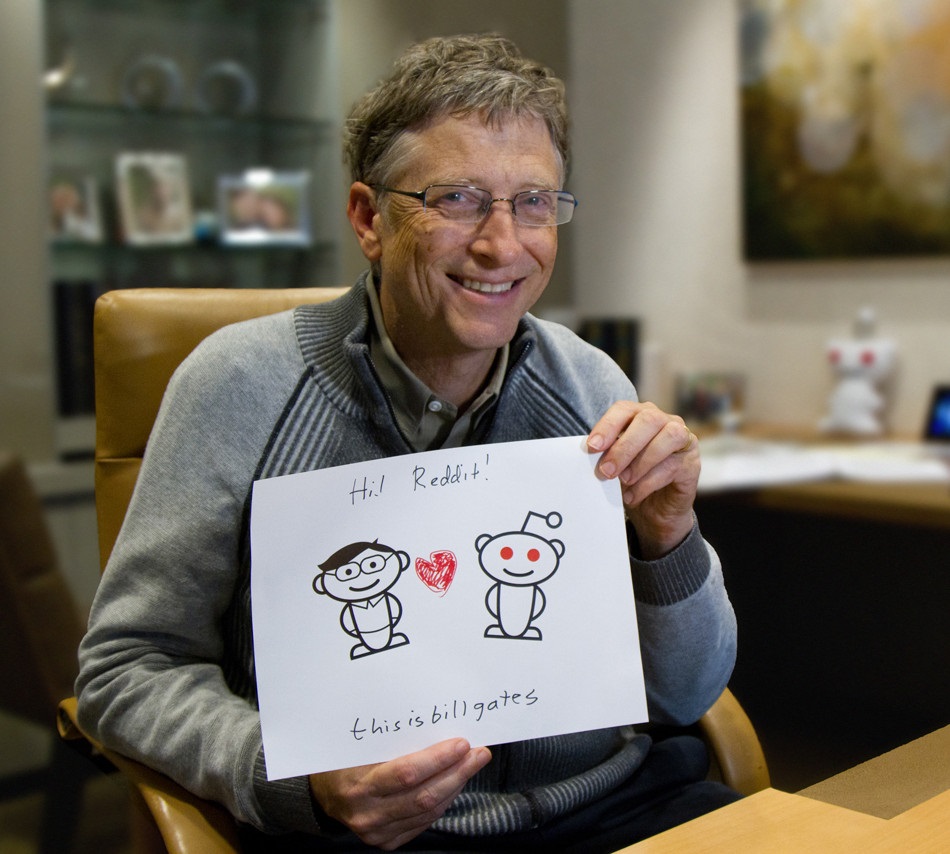 Things picked up a little bit in 2014, when he one-upped himself by meeting Snoo in person. That AMA was also way more popular, prompting Gates to post a meme of himself as Austin Powers, which there's an explanation for, I swear. 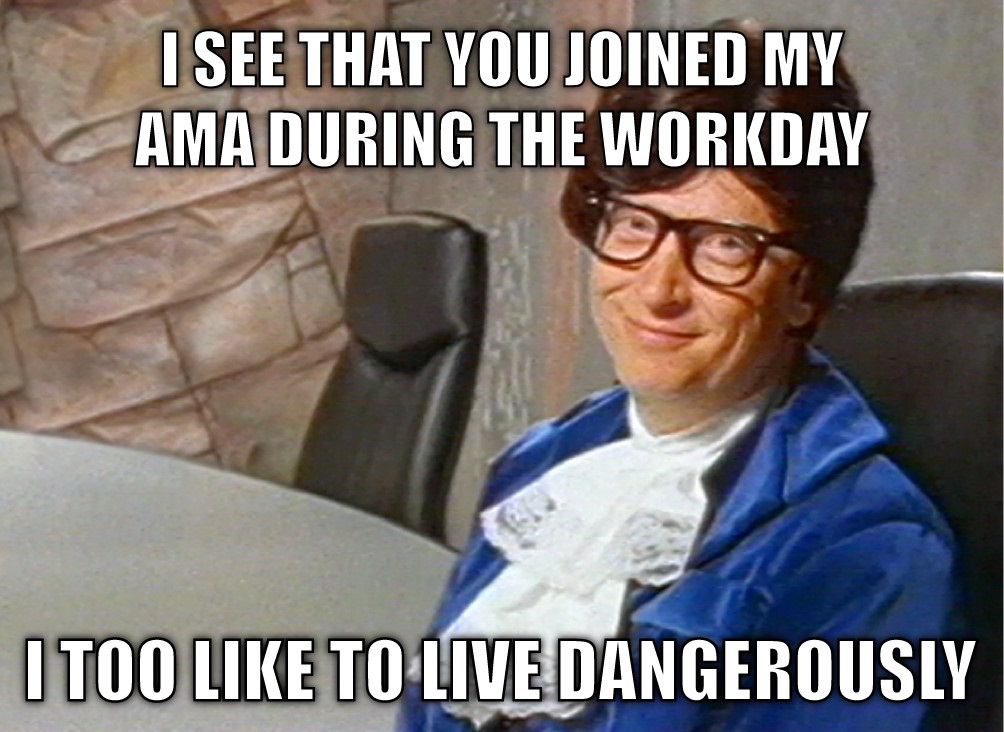 Once upon a time, Bill Gates and then-Microsoft CEO Steve Ballmer performed as Austin Powers and Dr. Evil, respectively, in a video for Microsoft employees. It's good to know that Gates can laugh at himself.

And at the end of the AMA, Gates and Snoo walked off into the sunset together after becoming best friends.

And Snoo showed back up to thank everybody for coming.

In 2016, Gates went a different route and recreated his 1973 high school yearbook photo, right down to finding the right sneakers. 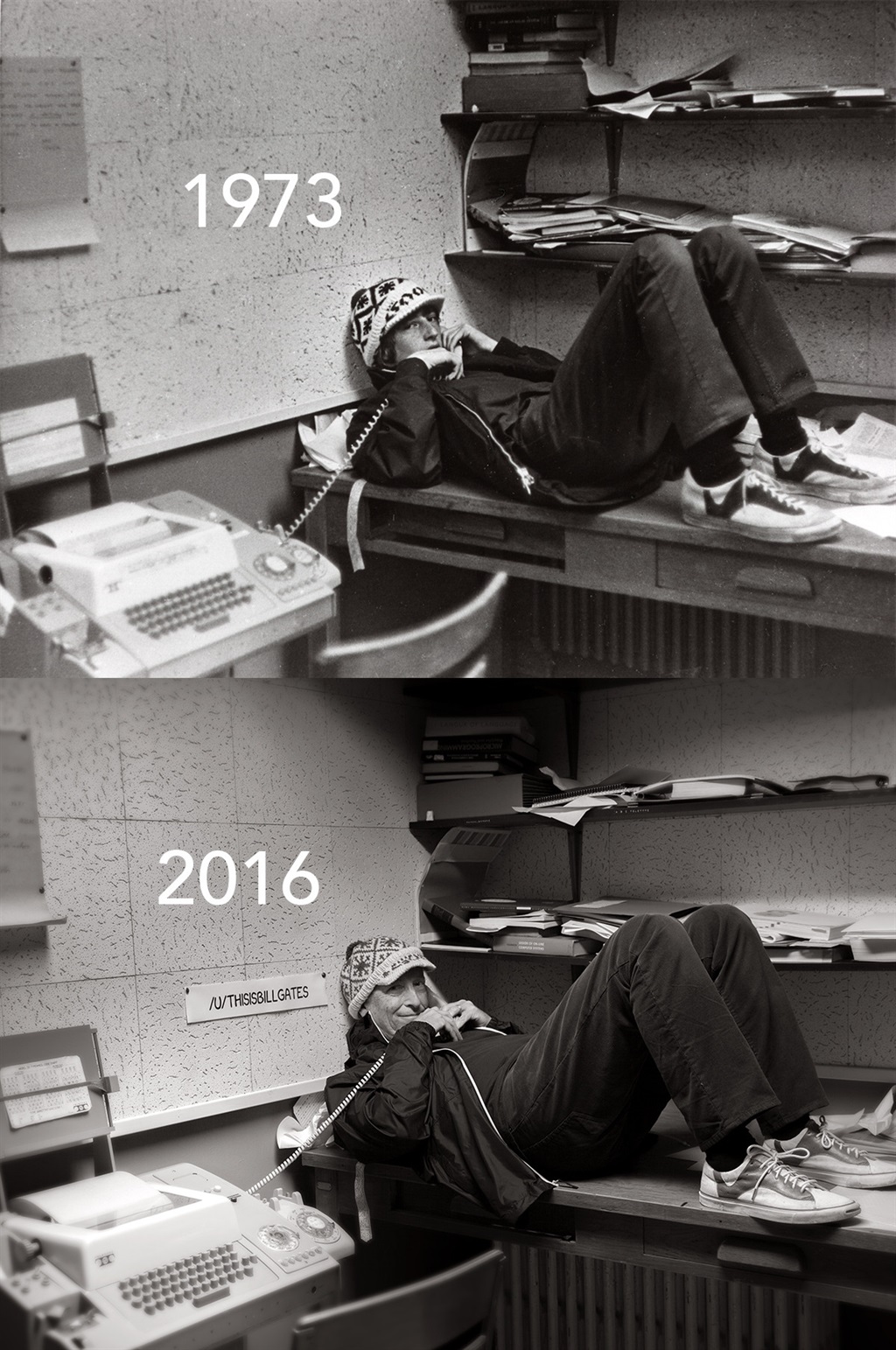 Bill Gates reprised his annual Reddit AMA with a video of all the "things he won't be doing today."

And to sign off, Gates proved he's a man who's worn many hats in his career: ...and complemented it with a video, cut with SNL footage. It's weird and great.

Here's the original SNL sketch, so you can compare.

For 2018, Bill Gates posted this video of all the things he "won't be doing today" to make time for the annual AMA, featuring a very adventurous cartoon version of himself.

He signed off with this video loop, after asking reddit a question of his own: "With all of the negative headlines dominating the news these days, it can be difficult to spot signs of progress. What makes you optimistic about the future?"

You can read the thousands of responses here.

On a final note, Gates' 2016 AMA also included a video he made answering some common questions he gets. It's worth a watch for a quick look into the mind of Bill Gates.