Bill and Melinda Gates are arguably the most generous couple in the world. Since 1999, the pair's eponymous foundation has invested more than R625 billion into poverty and education initiatives around the globe.

Above all other causes, they are perhaps most well-known for their investments in global health. To date, their foundation have poured R138 billion into helping people live healthier, longer lives, through money spent on low-tech health fixes like vaccines, malaria bed nets, door-to-door anti-polio campaigns, and HIV treatments.

For the most part, the money has helped.

Since 2000, the odds of someone living past the age of 5 have skyrocketed. While the US lags troublingly behind other developed countries in this regard, the fact remains that the odds of a child born today dying before her fifth birthday are half of what they were in 2000, no matter where in the world she opens her eyes and takes her first breath.

"The world has actually become dramatically healthier in the last 20 years," Melinda Gates told reporters on a press call about global health on Wednesday. "The story of the past two decades is a story of incredible improvement in the human condition, and it's one of the reasons Bill and I call ourselves optimists." 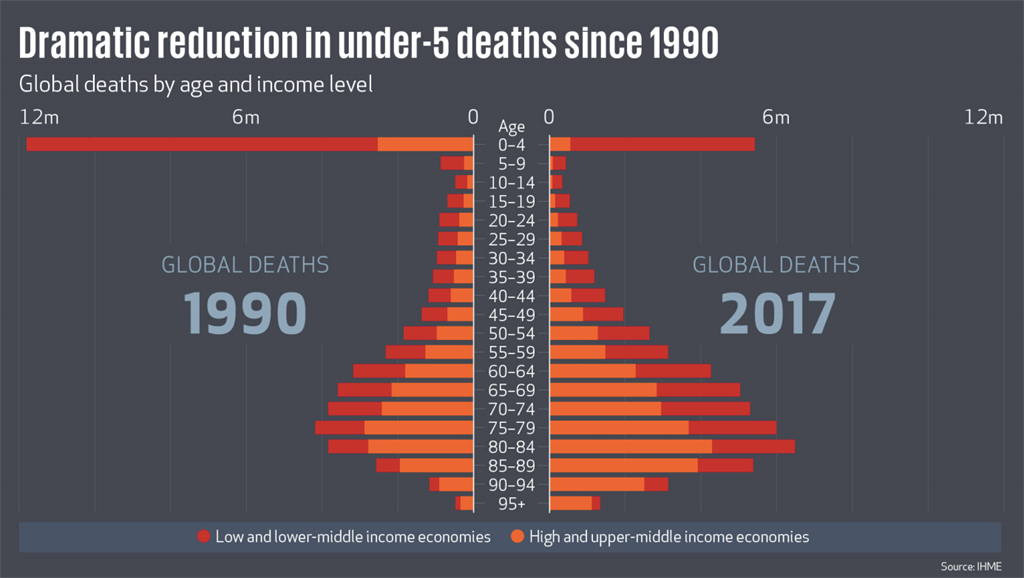 Much of the reason for this success, as the Gates's tell it, has to do with how their money's been spent. Contributions for global health have been funneled into four global health funds that the Gates's credit as fundamental to the health of the world: Gavi (for vaccines), the Global Polio Eradication Initiative, The Global Fund to Fight AIDS, Tuberculosis and Malaria, and The Global Financing Facility (for maternal and child health).

As more babies get their shots, fewer children die, which leads women to birth fewer babies, knowing those that they do have will stay healthier, longer.

"If a parent knows their children will grow up to thrive and survive, they will actually naturally bring down the number of children they have," Melinda told Business Insider after the press call.

Why the Gates's invested in shots and healthcare

The Copenhagen Consensus Center took a hard look at how every dollar the Gates Foundation has spent on the four health programs since 2000 has performed. They also tracked what might've happened if instead of using the money to fund things like shots, bed nets, and family planning, the Gates Foundation had used the stock market to one day pull more people out of poverty and into middle-income lifestyles.

"Suppose that our foundation hadn't invested in Gavi, the Global Fund and GPEI and had instead put that R138 billion into the S&P 500, promising to give the balance to developing countries 18 years later," Bill Gates wrote in the Wall Street Journal on Wednesday. "As of last week, those countries would have received about R166 billion, adjusted for inflation, or R236 billion if we factor in reinvested dividends."

Even investments in energy projects (an estimated R2,083 trillion return) and infrastructure (an estimated R2,361 trillion) didn't fare as well as the R138 billion that was spent on global health funds.

"The R138 billion that we gave to help provide vaccines, drugs, bed nets and other supplies in developing countries created an estimated R2,777 billion in social and economic benefits," Gates wrote.

That's better than anything the S&P 500 can promise.

The education programs, vaccine campaigns, and bed nets the Gates Foundation has funded would not be anywhere near as successful without the support of rich countries like the US, which can contribute more than the Foundation with less effort.

"Despite it being R138 billion, you know, still, we're only about 5% of these funds" Melinda said on the call. "It's government funds."

(The Gates Foundation contributions to each of the funds range from 5% to 33%.)

These life-saving vaccine initiatives come at a low cost to taxpayers. The US, for example, spends just over 1% of its annual budget on foreign aid, while the British spend 0.7%. Ahead of the annual meeting of some of the world's richest people in Davos, Switzerland next week, Gates urged the moneyed countries of the world not to forget the importance of their commitments to global health.

"Over the next 18 months, all four of these [programs] are at kind of a critical point where the level of distraction by domestic issues or issues that are confined to the rich world do make us somewhat concerned," Bill Gates said on the call, noting that each of the the programs are going to be due for new funding rounds soon.

The Gates's are worried about a cluster of African countries that are set to birth a lot more babies in the coming years, especially the Democratic Republic of the Congo and Nigeria.

"You have this cohort coming through that could end up with a lot of death and disability, which is not something anybody wants," Melinda said. It's why she believes, as her husband does, that an investment in health is more valuable than just about any other a person can make.

"Because health is what then allows people to go on and get a great education and participate fully and reach their full potential," she said.