"The Rock", mined in South Africa some 20 years ago and the biggest white diamond ever to be sold at auction, fetched R301 million under Christie's hammer in Geneva on Wednesday.

Described by Christie's auction house as "a truly exceptional pear-shaped diamond", the 228.31-carat stone was touted as the highlight of the Magnificent Jewels event held on Wednesday afternoon.

"The Rock", which has been worn as a Cartier necklace and shown in Dubai, Taipei, and New York ahead of its auction in Geneva, was expected to fetch between $19 million and $30 million (R305 million and R481 million).

Bidding on "The Rock" started at CHF14 million (Swiss Francs) and quickly rose to CHF18 million before stalling, with the auctioneer accepting smaller increments as interest waned.

In the end, as the hammer came down on Lot 26, the golf-ball-sized diamond sold for an underwhelming CHF18.6 million (R301 million) to the highest bidder. 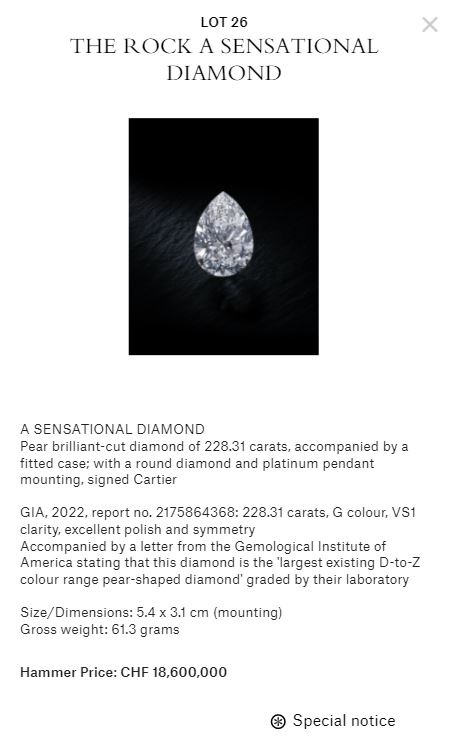 The diamond is accompanied by a fitted case, with a round diamond and platinum pendant mounting, signed Cartier.

The record for the most expensive white diamond ever sold at auction still belongs to a 163.41-carat gem which was sold by Christie's for $33.7 million or R540 million in 2017.

And "The Rock" isn't the only notable South African diamond sold at auction in 2022. The 15.1-carat De Beers' Cullinan blue diamond sold for HK$450.9 million (R911 million) at Sotheby's in Hong Kong in late April.

The De Beers Blue is among the top-10 most expensive diamonds ever sold, only slightly behind the 14.62-carat Oppenheimer Blue Diamond.