Explorers in Antarctica found the largest soft-shelled egg ever seen An artist's interpretation of a mosasaur birth, showing a giant mosasaur laying an egg while a baby swims towards the surface shortly after hatching from a different egg.
Francisco Hueichaleo, 2020.

After a mysterious, 66-million-year-old fossil was found in Antarctica, it sat unstudied for nearly a decade.

Researchers weren't sure what the object was or where it came from, so they referred to it as "The Thing."

A study published this month, however, solved part of the mystery: A group of paleontologists announced that "The Thing" is a giant, soft-shelled egg - the largest such egg ever discovered.

"This is the biggest one by a long shot," Lucas Legendre, lead author of the study, told Business Insider, adding, "it's massive - about the size of an American football - and looks exactly like a lizard or snake egg."

The fossil's size and geographic origin raised an obvious question, though: "We were curious what animal could've laid that egg," Legendre said.

His group thinks it came from to a massive marine reptile - such as a mosasaur or plesiosaur - that preyed on fish, sharks, and other underwater creatures. But that's a controversial conclusion.

An egg that's hard to beat

Legendre's colleagues discovered "The Thing" in 2011, off the coast of Antarctica on Seymour Island, then brought it to Chile's National Museum of Natural History.

The researchers identified the fossil as an undiscovered type of egg, which they named Antarcticoolithus bradyi. They did not find any fossil remains of the creature that laid it.

The egg has a deflated quality, Legendre said, which suggests the animal inside hatched before the egg was fossilized.

Based on the egg's dimensions (27 cm by 17 cm), he added, the animal that laid it would have been more than 6 metres in length without counting its tail. That's about twice the length of a great white shark. The size aligns what paleontologists know about swimming reptiles like plesiosaurs: Some of the largest plesiosaurs ever found come from Antarctica and reached lengths of 10 metres or more.

The rock formation where the egg was found also contained skeletons from baby mosasaurs and plesiosaurs, along with adult specimens. Together, that evidence suggests this area of Antarctica could have been "a sort of a nursery site with shallow protected water - a cove environment where the young ones would have had a quiet setting to grow up," Legendre said in a press release. 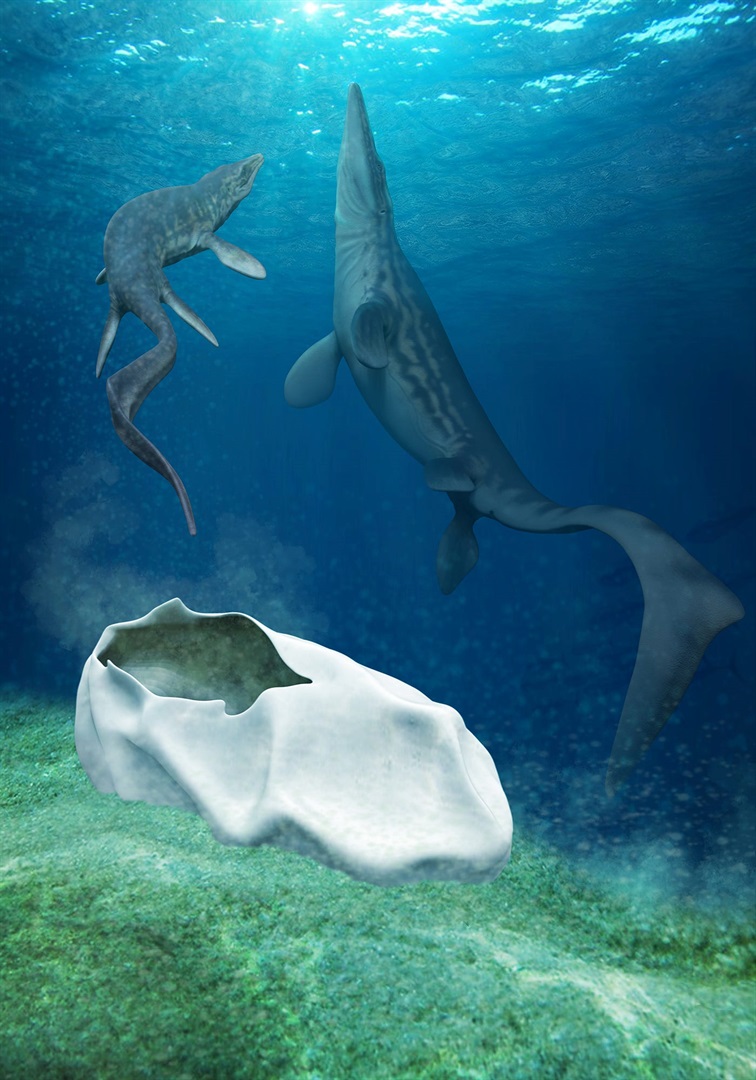 An artist's interpretation of a mosasaur birth.
Francisco Hueichaleo, 2020

But the conclusion that a plesiosaur or mosasaur laid this egg challenges a prevailing idea: Many scientists don't think such creatures laid eggs at all.

"Laying an enormous shelled egg underwater would have created all sorts of problems for hatching infant reptile, which would have needed to surface almost immediately to breathe air," Ben Kear, a paleontologist from Uppsala University? in Sweden, told Business Insider.

Some experts think the Antarctic egg came from a dinosaur

If a marine reptile didn't lay this egg, what did?

The egg's age and size suggest it could have been laid by giant Sauropods that roamed the Earth during that time, Legendre said. Sauropods were herbivorous, long-necked dinosaurs like Brontosaurus or Diplodocus.

But the egg's elongated shape doesn't match that of other dinosaur eggs, which were more spherical. Plus, Legendre added, the only dinosaurs that lived in Antarctica 66 million years ago are known to have laid hard-shelled eggs.

An artist's interpretation of the birth of a baby mosasaur. The illustration shows (from left to right) the egg being laid, the baby emerging from the egg, and an image of the empty egg after fossilization.
Francisco Hueichaleo, 2020

Another revelation from the prehistoric world could help solve this mystery. A recent study of fossilized eggs from the Gobi Desert revealed that two dinosaur species - Protoceratops and Mussaurus - had left behind clutches of leathery eggs with soft shells.

Until now, every dino egg ever found had a hard shell, like those of birds. But the new finding showed that some of the earliest dinosaurs laid soft-shelled eggs like turtles do.

"I've been excavating in Mongolia for 20 years now, and we find a lot of dinosaur eggs. But these clutches tell us something very different from what we knew before," Mark Norell, the lead author of that study and a paleontologist at the American Museum of Natural History, previously told Business Insider. Kear thinks the discovery that some dinosaurs laid soft-shelled eggs could be the answer to the Antarctic egg enigma.

"It is now very plausible that Antarctoolithus might have been laid by some form of dinosaur," Kear said, adding, "after hatching on land, the discarded eggshell could have been washed out to sea, where it remained buoyant for some time because of trapped air before sinking to the seafloor and becoming buried in mud."