2020 wasn’t a great year for investors with a nervous disposition.

While the JSE’s All-Share Index may be on track to end the year about 5% higher, this relatively stable performance belies the year’s wild share moves as the pandemic wreaked havoc.

But, in the unlikely event you timed the market exactly right amid the mayhem, there were opportunities to make massive profits.

Here were some of the major share comebacks in 2020 – tracked from their lowest points this year up to earlier this week, based on data compiled by the market information company TimBukOne: In March, Sasol’s share price fell to below R21. If you picked up some shares then, you would have increased your investment more than eight-fold by June as it climbed to above R170. It is currently trading at around R140.

Still, the petrochemical giant is now less than half the company it was at the start of the year; its share price has plummeted from above R320 as oil prices sank.

Demand for fuel tanked during lockdowns, when populations were ordered to stay at home, and oil prices fell to their lowest level in 18 years – at one point to around $20, far below break-even point for Sasol’s energy business.

Sasol also faced pressure as the full scale of the budget over-runs and other problems at its Lake Charles project in the US became clearer. The company confirmed that its key new plant in Louisiana would cost 50% more than planned (final price: almost $13 billion), and that its long-delayed launch was delayed even further. This compounded concerns about its massive debt burden, which was somewhat assuaged by the announcement in October 2020 that it would sell a $2 billion stake in three Lake Charles units to LyondellBasell Industries.

Tongaat Hulett +415% (from its lowest point this year) Tongaat faced a perfect storm last year as cheap sugar imports, the introduction of a sugar tax and a weak property market (the company has a large property portfolio) hit its business, and its debt burden frew. This was made much, much worse by the company’s admission that its 2018 financial results could not be trusted. Its share price lost 90% of its value, before the shares were suspended for seven months.

It started trading again in February this year, and Tongaat has since made progress to get its affairs in order.

Most importantly, it announced a large deal to sell its starch business to Barloworld in February. As the damage of the pandemic started to play out, Barloworld later disputed the terms of the deal, but it was finally concluded in recent weeks. Its share price is currently trading at around R10, after almost reaching R2 in April. Its share price fell from around R15 at the start of the year to R1.35 in October – just before it released a surprisingly solid trading update. It has since powered back to almost R7.

The company managed to grow its profit thanks to cost cutting. It also already wrote off a significant amount of goodwill in some of the group’s resourcing businesses in the previous year. It also sold two business units last month, bringing in some cash.

Invicta +324% (from its lowest point this year) 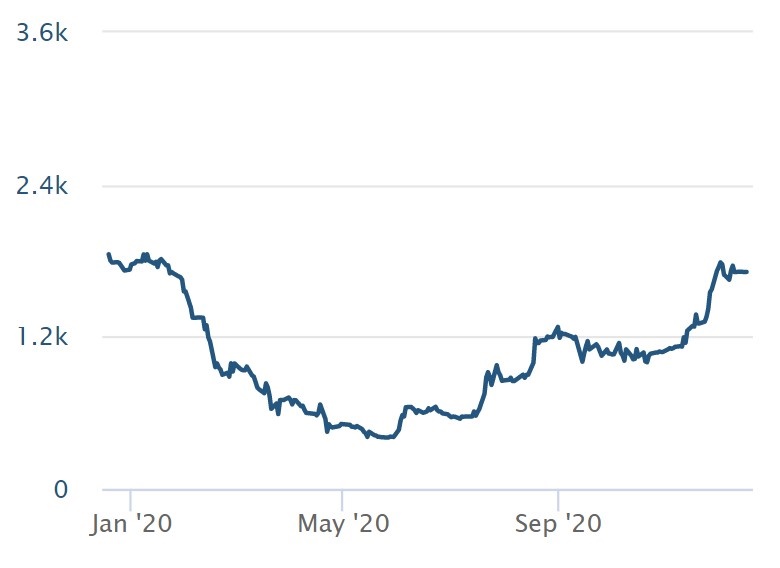 After a warning in February that it is considering issuing shares as part of a rights offer to deal with its debt burden, its share price suffered a steep drop, and the losses were then compounded by fears about the impact of the pandemic on its businesses.

The share price eventually fell to almost R4, before starting to recover to its current R17 – almost the same level as at the start of the year. This was in part thanks to a couple of large deals to sell some of its assets.

ArcelorMittal +320% (from its lowest point this year) Africa's biggest steelmaker, and the South African unit of the world's leading steel company, had a nightmare year, which saw its share price fall from above 160c in January to only 26c by March. The pandemic and lockdowns sapped steel demand, and by June the company announced wide-ranging restructuring plans, and thousands of job losses. It closed its Saldanha steel plant and suspended furnaces at Vanderbijlpark and Vereeniging.

By September, there were predictions of its possible collapse, with expectations that the international group may decide to close its loss-making unit in South Africa.

A few weeks later, however, its share price started to climb as the group announced that it would restart the second blast furnace in Vanderbijlpark in January after the demand for steel in South Africa recovered "at a rate quicker than originally anticipated". This was thanks to the return of construction projects and improved sales at retail outlets. 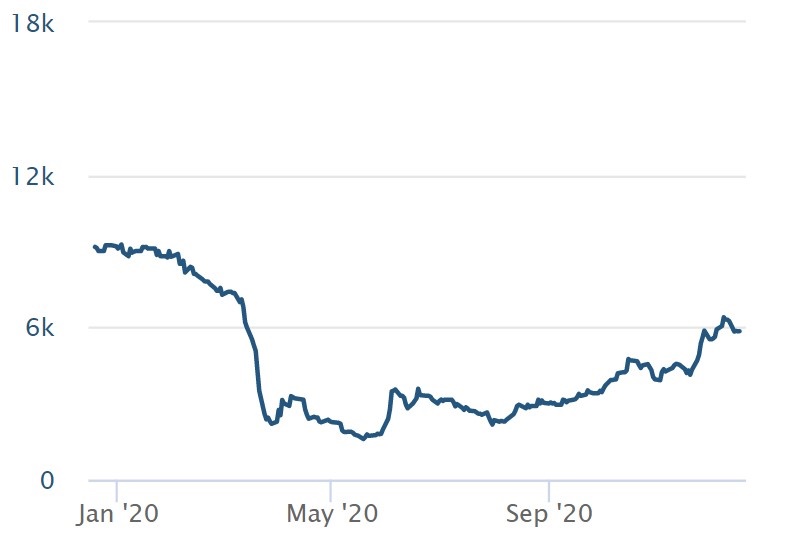 The investment holding company owns stakes in assets that were particularly hard hit by the lockdown, including its Tsogo Sun hotel and gaming businesses, as well as in transport. Its broadcast businesses (it owns a stake in eTV) was hurt by falling advertising during the pandemic.

Its share price duly plummeted from above R9 to below R2 at the height of the lockdown. It has since gained ground, and following the release of its half-year results – despite reporting a 204% fall in its headline profit – it saw further increases.

HCI holds an indirect stake in the Block 11B/12B exploration right off the coast of South Africa (including the Brulpadda and Luiperd wells), so also benefited from encouraging reports about the Luiperd well. Total confirmed that it had discovered a “significant” find of wet gas in the well. The IT group has been battling corruption claims over the past two years, and its share price fell from around R13 at the start of the year to below R3 in March as the full extent of the rot became clearer.

EOH employees apparently colluded with government officials to secure tenders, as detailed by its incoming CEO in his recent testimony before the Zondo commission.

But the company saw its share price rally after it made faster-than-expected progress in tackling its debt, including by selling assets. For the year to end-July, its debt shrank by a fifth to R2.6 billion. Its headline loss per share decreased by 72%, and it generated R706 million in operating cashflow. Its share price was last trading close to R9. 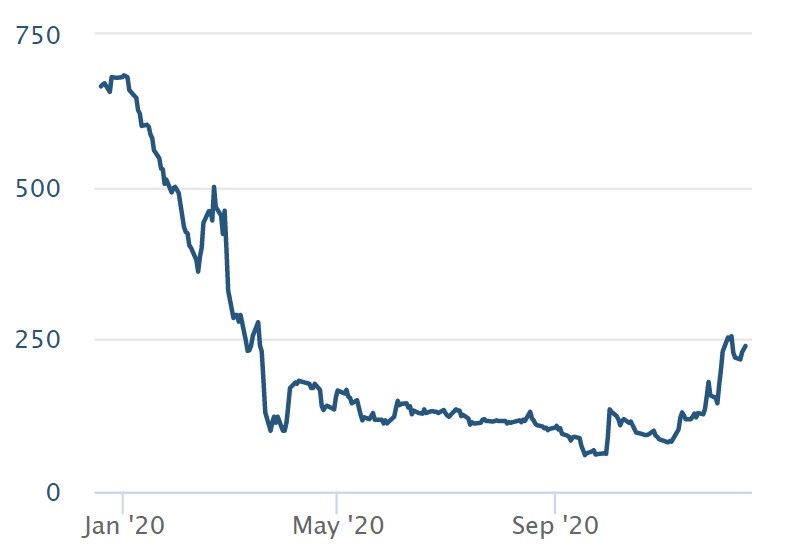 While the packaging company bounced back from its weakest point (around 60c, in September), its current trading level of around 250c it is still far from its 2020 starting point of 680c.

Nampak produces beer cans, so the alcohol ban had a big impact on its sales. Its other businesses also struggled, with the company writing off large chunks of its African businesses outside of SA. It suffered a headline loss from continuing operations of half a billion rand for the past year. But its main challenge is its huge debt burden (larger than its market capitalisation), some of which is denominated in dollar.

The market was somewhat cheered by the recent news that it paid off some of its dollar debt, using cash earned from the sale of local glass division as well as from its Nigerian carton business, which helped to lift it off its lowest levels this year. The platinum miners’ share prices are unique on the list: they are actually trading higher than at the start of 2020.

Despite the pandemic weighing on vehicle manufacturing and jewellery demand, platinum this year hit its highest level since 2016, gaining more than 10% and helping to compensate for the loss in miners' production due to the lockdown.

After slumping to R440 in March, Anglo Platinum tripled in value by the end of 2020 to trade at around R1,370 currently – but it’s still slightly below January levels after it had to shut down a plant in Rustenburg due to an explosion which caused extensive damaged.