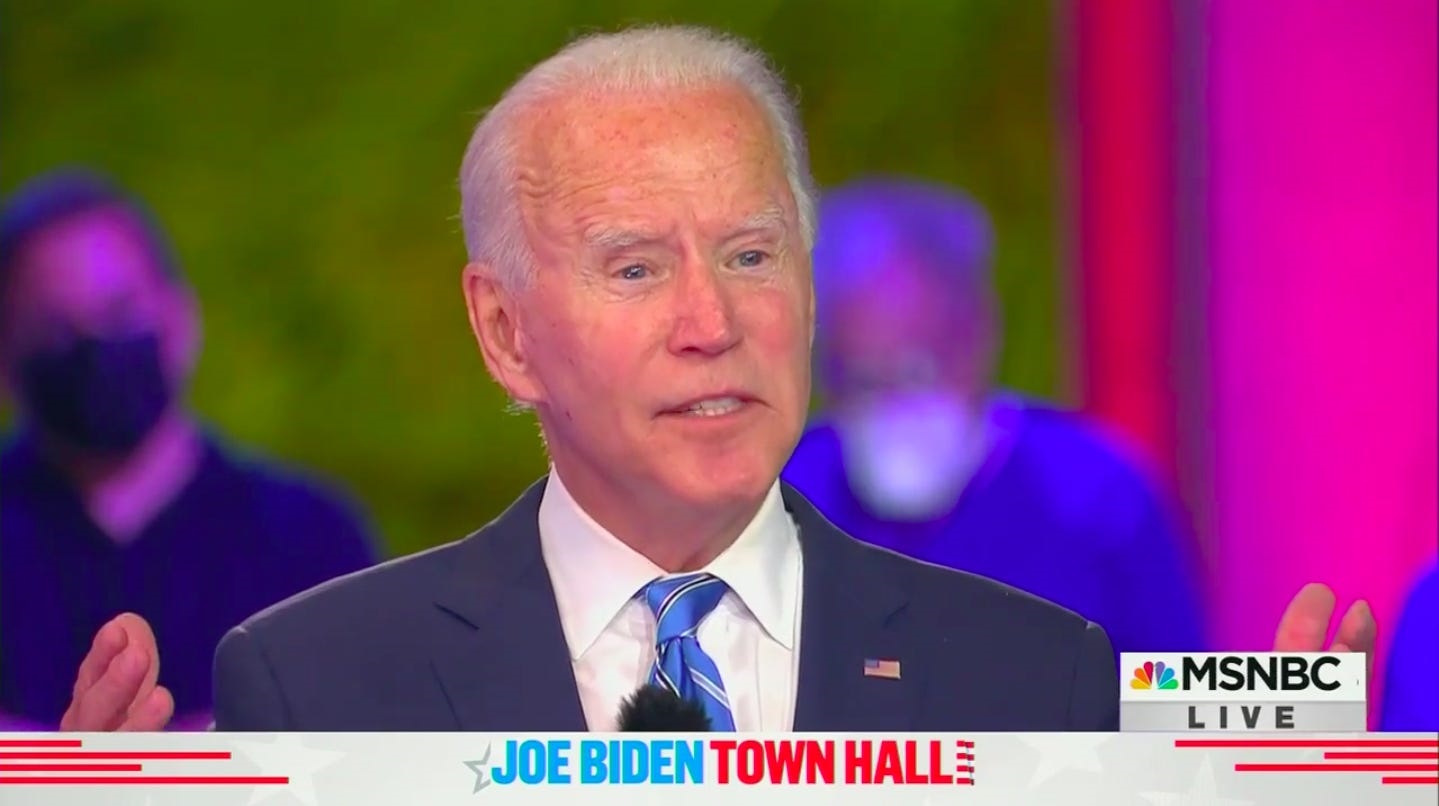 Democratic president nominee Joe Biden said he was unsurprised to learn that President Donald Trump caught Covid-19, and that 200,000 more Americans may die by year end if authorities do not enforce stricter public-health measures.

"Quite frankly, I wasn't surprised," Biden told MSNBC's Lester Holt when asked about the president's diagnosis during a Monday night town hall hosted by MSNBC.

Trump tested positive last Thursday and was taken to the hospital the following day, receiving a variety of treatments until his release on Monday.

"Look, for the last three months, three times a week I'm on the telephone and on Zoom with some of the leading immunologists in the nation, and they go through everything that's happening," Biden said.

"So the idea that Covid does not spread in proximity when you don't have a mask on, when you're not socially distancing, when there's large groups of people ... that's not surprising."

During the debate Biden told Holt that he does not fear for his own health because he is taking precautions.

"I would hope that the president, having gone through what he went through, and I'm glad he seems to be coming along pretty well, would communicate the right lesson to the American people: Masks matter," he added. "These masks, they matter. It matters. It saves lives. It prevents the spread of the disease."

To reiterate the point after the interview, Biden tweeted a clip of him putting on a mask alongside one of Trump taking one off upon arrival at the White House from the hospital on Monday evening.

Trump, who has rarely worn a mask throughout the pandemic, returned to work at the White House on Monday evening, even though he is still contagious days into his diagnosis.

It is unclear if the White House coronavirus task force has any plans to amend its strategy. Dr. Scott Atlas, a healthcare adviser who joined the team in August, told Business Insider's Ashley Collman that the White House would not change its pandemic strategy in light of Trump's illness.

Biden also warned during the town hall that the US death toll may double by January 1, 2021, if authorities do not introduce more precautions.

"Two hundred ten thousand people have died already, and the expectation is, if nothing changes, we're going to have another 200,000 dead by the end of the year. That's 400,000, God forbid it," he said.

He appeared to be referencing a recent forecast from the Institute for Health Metrics and Evaluation (IHME).

As of 6 a.m. EDT Tuesday the forecast has altered its figure to around 363,000 predicted deaths by year end. "The worst is yet to come," IHME director Dr Christopher Murray told CNBC on Friday.

With winter approaching, healthcare experts are worried that the US death toll will rocket as more people stay inside and immune systems weaken.