A red-shanked douc langur languishes in a treetop in Vietnam's Son Tra Nature Reserve.
Arshdeep Singh/Wildlife Photographer of the Year

When Arshdeep Singh's father announced he was traveling to Vietnam for business, the 13-year-old begged to come along.

His goal: photograph the endangered red-shanked douc langur, a monkey found only in the coastal rainforests of Vietnam, Laos, and Cambodia.

For two days, Singh sat waiting in the Son Tra Nature Reserve, peering towards the treetops. At last, a male douc appeared in the canopy. Singh caught the monkey's furtive glance on camera.

His breathtaking photograph joins others as a top pick in the 2020 Wildlife Photography of the Year competition, which is organized by the Natural History Museum in London. The frontrunners were chosen from among 49,000 entries, and many throw into sharp relief the resilience of species forced to contend with a warming planet and increasing human interference.

The photographers who submitted their work hail from 25 countries; some braved fires in the Amazon, spied on crocodiles in India, and tracked puffins in the North Sea in order to get their shots.

Below are 13 "highly commended" front-runners in this year's contest. The winners will be announced October 13. A young fox holds a dead brown rat as her brother attempts to take it in northern London, England.
Matthew Maran/Wildlife Photographer of the Year

UK photographer Matthew Maran snapped this shot of a young fox attempting to get her prize, a dead brown rat, away from her brother. Another fox vied for the rat too, he said, resulting in a three-way tug-of-war. It's likely, Maran said, that these youngsters' parents either gave them the rat, or they found it dead.

Foxes scavenge for everything from discarded food to birdseed in abandoned lots in northern London. When they're lucky, they find mice, voles, and even worms.

Brown bears in Alaska go for live prey. According to photographer Hannah Vijayan, the bear shown here stuck her head under the water to snap up a salmon. A brown bear pulls a salmon from the shallows of a river in Alaska's Katmai National Park.
Hannah Vijayan/Wildlife Photographer of the Year

Alaska's Katmai National Park is home to about 2,200 brown bears. When these bears, which are among the world's largest, awake from hibernation in the spring, they feast on sockeye salmon.

Males can eat up to 30 salmon per day and weigh more than 1,000 pounds by the end of the summer.

But sometimes, predators let their prey get away. In this photograph, two Ural owls watch a tasty morsel flee, deciding not to pursue it. A red squirrel bounds away from a pair of Ural owls in a forest of Hokkaido, Japan.
Makoto Ando/Wildlife Photographer of the Year

Then, a red squirrel appeared — one of the owls' favourite treats. The squirrel curiously peered into the owls' hole before making a quick getaway. "'I thought it was going to be caught right in front of me, but the owls just stared back," Ando said.

Like Ural owls, possums are mostly nocturnal. These two hid under a shower block until nightfall, when campers turned in for the night at a park in Yallingup, Australia. Two common brushtail possums under the roof of a shower block in a park in Yallingup, Australia.
Gary Meredith/Wildlife Photographer of the Year
The marsupials, likely accustomed to being fed by campers, posed nicely for photographer Gary Meredith.Come evening, the mother (left) and her joey squeezed out of shower and scampered up trees in the park to eat peppermint leaves.

Other creatures don't mind eating in front of the camera. This wandering spider scuttled for kilometres to find these glass frog eggs, then ate them one by one as photographer Jaime Culebras watched. A large wandering spider in Manduriacu Reserve, northwestern Ecuador.
Jaime Culebras/Wildlife Photographer of the Year
This egg smorgasbord lasted for over an hour, Culebras said. The arachnid slowly pierced each egg, injected her digestive juices to liquify the prey inside, then sucked out the innards.There are 11 species of wandering spiders, all of which hunt in the central American rainforest by night, typically preying on frogs. 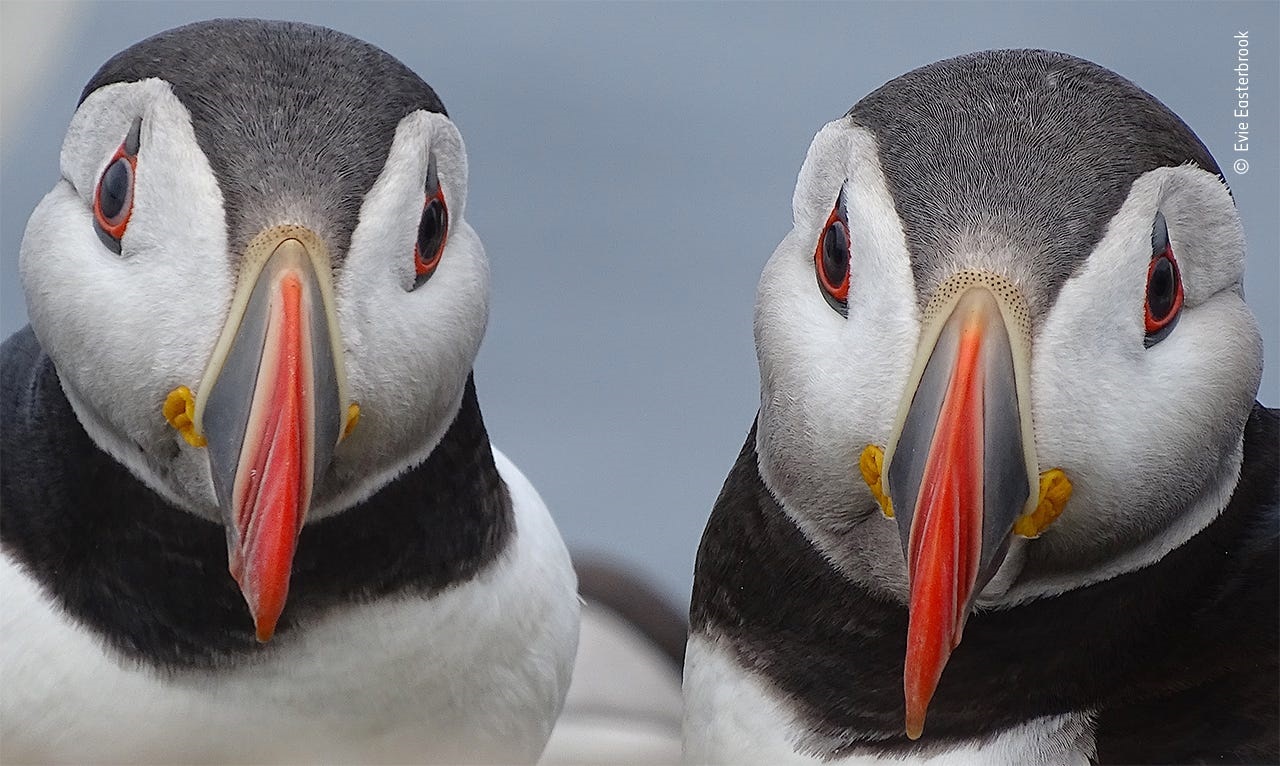 A pair of puffins in the Farne Islands near Northumberland, UK.
Evie Easterbrook/Wildlife Photographer of the Year
Puffin populations are in decline around the world because sand eels are becoming harder to come by, mostly due to warming waters and more frequent storms in the Atlantic.   Teenage photographer Evie Easterbrook captured these puffins on camera near their nest in the UK's Farne Islands. Puffins pairs tend to mate for life and return to the same burrow each season, sharing egg-incubating and parenting duties. When it's time to breed, the puffins plumage shifts from dull grey to the more brightly coloured visages shown here.

But not all animals want to be colourful. This African hippo used its monochromatic skin to camouflage itself to great effect. 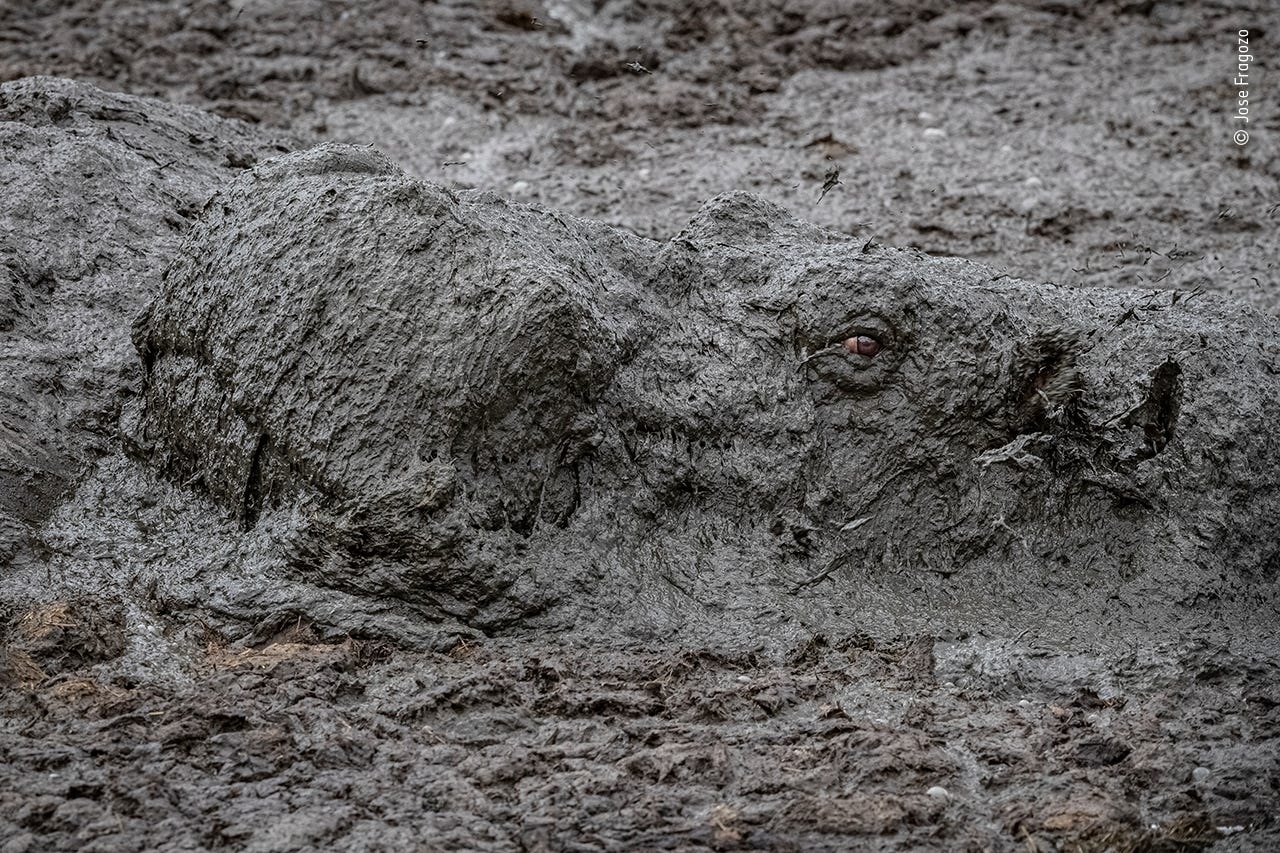 Drought isn't the only threat to aquatic species — hunting is a problem, too. Gharials, fish-eating crocodiles from India, are critically endangered. Humans have also contributed to the decline of topshells in the Pacific. The mollusks are prized for their 6-inch-wide mother-of-pearl shells, which can be used to make buttons or jewellery. Mollusks and a gray reef shark on remote coral in Fakarava Atoll, French Polynesia.
Laurent Ballesta/Wildlife Photographer of the Year
Topshells were once the world's most traded invertebrate.

But conservation efforts are helping them to rebound, and ensuring that topshells like these can survive among the coral of remote French Polynesia. That's where photographer Laurent Ballesta captured this photo, which also shows a grey reef shark searching for its next fishy meal.

This picture, while troubling, represents another conservation success story, according to photographer Thomas Peschak. A collection of dead seabirds accidentally caught by Japanese tuna-fishing boats off South Africa's coast in 2017.
Thomas P Peschak/Wildlife Photographer of the Year

The photo shows dead shy albatross, white-chinned petrels, and a yellow-nosed albatross that wound up as fishermen's bycatch off the South African coast.

A boat's fishing line can extend for more than 80km, dotted with thousands of baited hooks. Seabirds trying to snag fish off the baited line can hook themselves and drown.

More than 300,000 seabirds are killed this way every year around the world, however.

Humans' hunger for meat and fish is especially evident at wildlife markets. A market trader slicing up fruit bats in Tomohon Market in northern Sulawesi, Indonesia.
Quentin Martinez/Wildlife Photographer of the Year

In the markets of Sulawesi, Indonesia, traders sell fruit bats, pythons, and bushrats for food.

Local hunters and traders bring wild mammals and reptiles, along with domestic cats and dogs, to the Tomohon Market, pictured above. Photographer Quentin Martinez said he saw live, wild animals tied by ropes or piled in cages, waiting to be butchered.

Meat consumption aside, humans can consume entire landscapes, too. Mildred Lake Tar Mine in the Alberta Tar Sands, Canada.
Garth Lenz/Wildlife Photographer of the Year
This area, known as the Alberta tar sands, was once a vast forest. Now the landscape is a section of the Mildred Lake Tar Mine, part of the world's third-largest oil reserve.In this image from photographer Garth Lenz, a huge mining pit is surrounded by waste ponds containing the toxic byproducts of the mining process. Mining and extracting the oil from sand and clay produces nitrogen oxides and sulfur oxides that pollute air and waterways.

Humans destroy forests by burning them, too. This photo shows a portion of the Brazilian Amazon that's being destroyed in a deliberately set blaze. 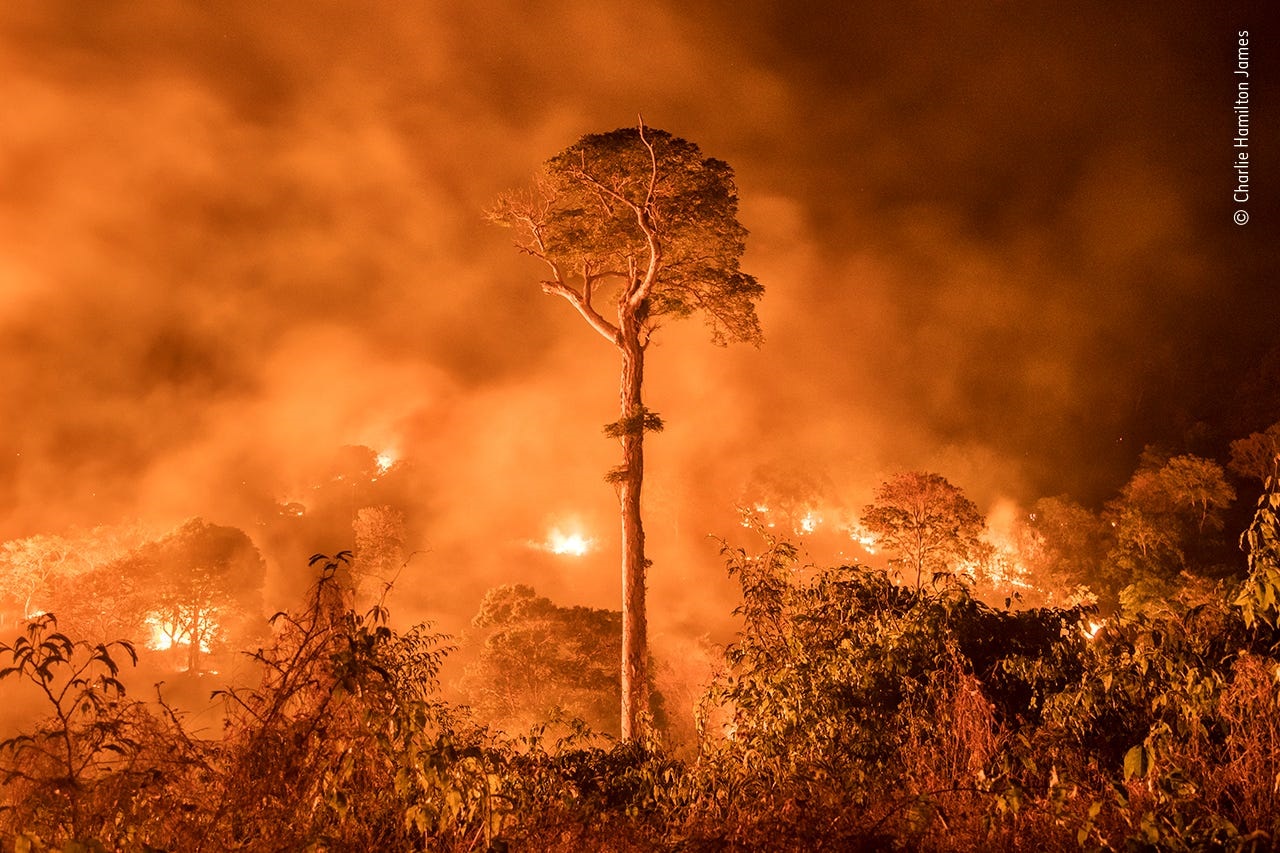 A fire burns in the Amazon rainforest of Maranhão state, Brazil.
Charlie Hamilton James/Wildlife Photographer of the Year
Loggers and cattle ranchers illegally start fires to clear areas of the Amazon rainforest, many of which belong to indigenous tribes, for agriculture and cattle farming.Charlie Hamilton James has photographed deforestation in the Amazon for the past decade. He called the single tree in this photo "a monument to human stupidity."