The best wildlife photos taken this year reveal a hippo murder, a hungry leopard seal, and a weevil ensnared by zombie fungus Stems of Eurasian watermilfoil, bearing soft, feathery leaves, reach for the sky from the bed of Lake Neuchâtel, Switzerland.
Michel Roggo/Wildlife Photographer of the Year

Humans are rarely offered a glimpse into the raw, unfiltered world of the animal kingdom. But the astounding images from the annual Wildlife Photographer of the Year competition, which is developed and produced by the Natural History Museum in London, throw into sharp relief the brutality of predator-prey interactions and the resilience of species around the world.

This year, photographers traipsed through the Amazonian jungles of Peru, dove deep into the waters of French Polynesia, and stalked isolated ice floes in Antarctica to capture images of animals' struggles to survive and get a decent meal.

Picture takers from 100 countries submitted 48,000 entries for the contest, including photos of a leopard seal lunging for a penguin, a male hippo crushing a newborn in its jaws, and a sea turtle strangled by a rope.

Here are 14 of the "highly commended" front-runners in this year's contest. The overall winners will be announced on October 15.

Survival is challenging in the African savanna. Here, a newborn hippo gasps its last breath while being crushed to death in the jaws of an aggressive male. The Swiss photographer Adrian Hirschi said he watched as the male hippo grabbed the infant from beside its mother in the shallows of Lake Kariba, Zimbabwe.

The calf died, though infanticide is rare among hippos. Male hippos overall are aggressively territorial, and brutal fights are not uncommon. Hippos are also known to attack and kill humans when they feel threatened.

More commonly, of course, animals are killed by predators, not members of their own species. Eduardo Del Álamo observed this lone gentoo penguin being stalked by a leopard seal. The seal had slunk under Álamo's inflatable raft moments before, the photographer said. When it surged out of the water, mouth open, Álamo was ready.

Gentoo penguins are the fastest underwater swimmers of all penguins. But in this case, the leopard seal pursued the penguin for more than 15 minutes before catching and eating it.

Female leopard seals can grow to 11.5 feet long and weigh more than 1,100 pounds, with bodies built for slicing through the water and long sharp canines for chomping on prey.

While cheetahs are predators in their own right, they still face threats. Photographer Peter Haygarth snapped this look of surprise on a male cheetah's face as it was attacked by a pack of African wild dogs. 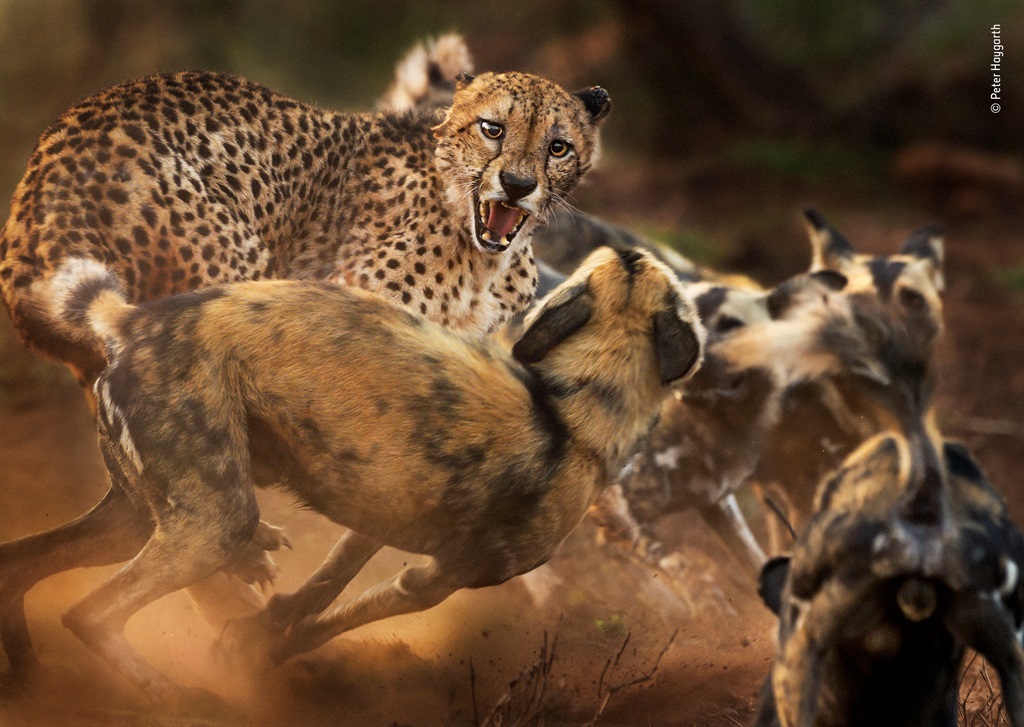 Peter Haygarth/Wildlife Photographer of the Year

Haygarth had been following the dogs as they hunted in Zimanga Private Game Reserve in KwaZulu-Natal, South Africa. The pack had just lost a warthog when they came across this cheetah.

As the rest of the 12-dog pack arrived, the animals' confidence grew, and they began to encircle the cat, chirping with excitement, the photographer said. The cheetah hissed and lunged back; it was able to flee a few minutes after the spat began.

Not all threats come from other animals. This image, which photographer Frank Deschandol calls "The Climbing Dead," shows a weevil clinging to a fern stem in the Peruvian Amazon. The insect is dead, and the three antennae-like growths protruding from its thorax are tendrils of a zombie fungus. Frank Deschandol/Wildlife Photographer of the Year

The zombie fungus used the weevil to spread its spores into the wind. It took control of the bug's muscles and compelled it to climb the fern stem to a height suitable to spread the spores. Once the insect held fast, the fungus sprouted the three growths (topped with spore capsules) seen in the photo.

Usually though, the biggest threat to most animals is us. Humans put an average of 8.8 million tons of plastic into the ocean every year, and it can harm marine life. In the case of this Kemp's ridley sea turtle, an encounter with a beach chair meant death. Matthew Ware/Wildlife Photographer of the Year

Matthew Ware photographed this dead sea turtle on the shores of Alabama's Bon Secour National Wildlife Refuge. The creature had a rope around its neck; the other end was attached to a washed-up beach chair.

The Kemp's ridley is the most endangered sea turtle. Over the past 50 years, human activities - from egg and meat consumption to incidental capture in fishing nets - have greatly reduced its numbers.

Humans kill plenty of animals directly, too. This image by Jo-Anne McArthur shows hanging rattlesnake skins in Texas, next to handprints made in snake blood from people who skinned the snakes. Every year, the town of Sweetwater, Texas, holds a four-day festival called the rattlesnake round-up, during which tens of thousands of rattlesnakes are caught, killed, and skinned. In the spring, wranglers there use gasoline to flush the snakes out of their winter dens (though the practice is banned in many US states). The snakes are then tossed into snake pits at the festival, decapitated, and skinned.

Not every human-animal interaction is sinister, of course. The photographer Thomas Peschak captured the curious approach of a young gray whale toward a pair of hands reaching into the water off the coast of Baja California, Mexico. In the San Ignacio Lagoon - a gray whale nursery and sanctuary - baby grey whales and their mothers actively seek contact with people for a head scratch or back rub.

San Ignacio is a World Heritage Site in which whale watching is carefully managed by the local community. There are a limited number of boats permitted and no winter fishing allowed. Interaction with the sea creatures happens only if the whales choose.

Many animals have learned to take advantage of our abandoned possessions. The backseat of this 1970s Ford Pinto is home to five playful raccoon kits in Saskatchewan, Canada. Jason Bantle/Wildlife Photographer of the Year

The photographer Jason Bantle snapped this photo of a raccoon mother poking her head through a hole in the windshield. The hole was blunt-edged and too narrow for coyotes - the raccoon's primary predators - to fit through. That made the Pinto an ideal place for this raccoon to raise her family.

The pristine white wall of a Chinese bathroom doesn't seem like an ideal place for a moth's cocoon. But that's where the photographer Minghui Yuan found this Cyna moth pupa. Minghui Yuan/Wildlife Photographer of the Year

Yuan took this photo after doing some filming work in the rainforest of Xishuangbanna in southwest China. A more typical location for a Cyna caterpillar to pupate would be a tree trunk or rock in that forest, but this one weaved a delicate silk cocoon, just 1.5 inches long, on an indoor wall.

In a very different kind of forest, on the Japanese island of Hokkaido, photographer Diana Rebman captured the moment a long-tailed tit hovered to slurp moisture from the tip of an icicle. Diana Rebman/Wildlife Photographer of the Year

Rebman said it was bitterly cold that morning, with temperatures around minus 4 degrees Fahrenheit.

In this photo by Carlos Pérez Naval, a three-toed sloth sits undisturbed in the canopy of Panama's Soberanía National Park. Naval said he'd been hoping to see a sloth while on a trip to the park with his family.

The orange fur and dark stripe on the back of this particular creature marks it as an adult male. It was hanging out in a cecropia tree, occasionally moving (slowly) to reach new leaves.

Several other photographers in this year's contest ventured underwater to find the creatures they wanted to capture on camera. Alex Mustard took this shot of a swirling eye of bigeye trevally fish; the circling behaviour deters predators. 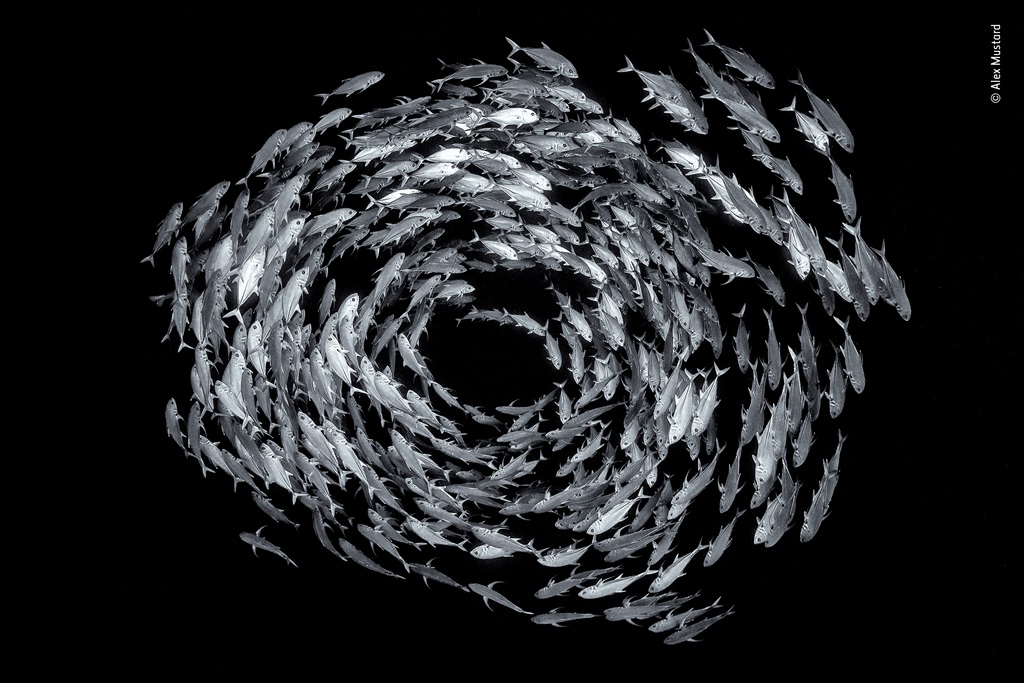 Alex Mustard/Wildlife Photographer of the Year

Mustard has traveled to this part of the Red Sea, off the coast of Egypt, regularly over the past 20 years. Reef fish spawn in the waters there every summer.

"The big lure is that I always see something new," he said.

Photographing deep-ocean denizens in their natural habitats is challenging. In this nighttime photo, a jackfish peers through a jellyfish's translucent bell in the water off French Polynesia. With nowhere to hide in the open ocean, the jackfish has adopted the jelly as a nocturnal shield, slipping under its bell and out of the reach of the jelly's stinging purple tentacles.

The photographer Fabien Michenet said he's done hundreds of night dives and has never seen one creature without the other.

This Weddell seal, meanwhile, found its own safe space on some land-locked ice on South Georgia Island, north of Antarctica. Its flippers were crossed over its chest as it slept deeply. Ralf Schneider/Wildlife Photographer of the Year

The ice was relatively inaccessible to the seal's predators - killer whales and leopard seals - so the photographer Ralf Schneider took advantage of the animal's slumber to snap a quick photo. Weddell seals have a thick layer of blubber to keep them warm above and below the icy waters of Antarctica's Southern Ocean.

Related Links
21 images that show how much we've reshaped planet Earth over the last century
This beautiful South African photo is among the best wedding pics in the world
A NASA probe is going to visit Ultima Thule, the farthest object humanity has ever tried to...
Next on Business Insider
SA looks to ban some batteries, bulbs, and skin-lightening soaps next year. Here's why.