The best tablets currently on offer There aren't nearly as many tablet options as there are smartphones, but there's a tablet for pretty much anyone.

You'll hear it from us, and you'll hear it from most tech authorities - the most highly recommended tablet for most people is almost always going to be Apple's standard iPad. At its full retail price of around R7,000, it's affordable enough while offering the best set of features and apps. And if there's ever a deal on Apple's standard iPad, it's pretty much a no-brainer for anyone in the market for a tablet.

Still, there are other worthwhile options, especially when it comes to lower price ranges that might be more suitable for certain users, like kids, or using a tablet exclusively as a video streaming device where power and features don't really matter.

And there's the opposite end of the spectrum, where powerful tablets are better suited for power and professional users who can justify the extra cost that comes with performance and high-end features.

Here are the best tablets you can buy:

The best tablet for most people

The 2019 10.2-inch iPad is a great tablet for the vast majority of tablet users, and it supports the Apple Pencil.

Apple's iPads have always been the best tablets you can buy, but the high price tags made it tough to find an iPad on a budget. All that has changed with the 2019 10.2-inch iPad. It costs R6,999, but it offers nearly all of the same high-end specs and features as the top-of-the-line iPad Pros. It just has an older processor, and it's missing some of the extra bells and whistles that aren't totally necessary, from our experience.

If you own an aging iPad or iPad Mini, the new 10.2-inch iPad is an excellent upgrade. If you have an iPad Air 2 or an iPad Pro, you don't need to get the new one. The entry-level iPad is for anyone who has always wanted an iPad, but couldn't afford the price tag. It's an absolute , and even more so if you can find a deal on it.

The screen is sharp, the A10 processor is very capable (even though it's not the iPhone 11's A13 chip), the battery life should be great, and you can even buy things on it with Apple Pay, thanks to the Touch ID fingerprint sensor.

It also supports the Apple Pencil, an incredible stylus with virtually no lag. You will have to pay extra for the Pencil, but if you like to take notes or draw on your iPad, it is well worth it. Naturally, any Bluetooth keyboard also works with the iPad, so if you want to use it as a quasi-laptop, you can pick up a great keyboard.

You simply can't beat those specs at that price point. Comparable Android tablets cost hundreds of dollars more, and the iPad still has a better app library and accessory support.

The aluminum build looks and feels premium, and the 10.2-inch screen size makes it a very portable device that's easy to stow away in your bag. It's quite light, too, so you can happily binge-watch Netflix in bed on your new iPad. Tech nerds will say it's a boring old design, but it's tried and true. Plus, the aluminum build is durable. - Malarie Gokey

Cons: Runs on a four-year-old chip, so it's best suited for light users The latest 10th-generation 2020 Amazon Fire HD 8 is super affordable, but it still delivers a good set of features that you'll enjoy using for watching videos and running simple apps.

Normally, you get what you pay for when it comes to technology. Once in a while though, you receive more than what you expect with a bargain-priced piece of tech.

The latest 2020 model of the Amazon Fire HD 8 is going to surprise you with its price tag and great performance. This certainly isn't a tablet that's going to compete with high-end iPads, but it has a good set of features for those who need only the basics from a tablet.

The Amazon Fire HD 8 also offers good parental controls, so it's a great tablet to give an older kid. Samsung's Galaxy Tab S6 is the best powerful Android tablet you can buy, and it comes with a great stylus.

Although the iPad is the best tablet for most people's needs, there are those who prefer to have an Android tablet and want one that's just as high-powered as the iPad Pro. For those people, the Samsung Galaxy Tab S6 (around R22,000 via Vodacom) is the answer.

Its 10.5-inch Super AMOLED screen has a 2,560 x 1,600-pixel resolution, and it's absolutely stunning. I binge-watched an entire new Netflix series on it and was deeply impressed by the picture quality and clarity. Most people tend to use their tablets for streaming video, so the high-quality screen is a major plus.

In terms of sound quality, the quad speakers - tuned by AKG - sounded great. Just make sure you don't cover them with your hands. The battery also lasted through the five-episode series with juice to spare. Samsung says the tablet gets 15 hours of battery life, and that proved true in my experience. Thanks to fast charging, the battery replenishes quite quickly.

It weighs around 400g, but you will likely need two hands to wield it, due to its size. The tablet is slim and lightweight enough to be a portable travel companion.

Beyond streaming, the Tab S6 is also fully capable as a laptop replacement in a pinch if you pay extra for a Samsung's keyboard case or another Bluetooth keyboard. It's a shame that the keyboard isn't just included in the price. The tablet does come with the S-Pen stylus, so at least you don't have to pay extra for that. I love using the stylus to take notes and draw.

The tablet's Qualcomm Snapdragon 855 processor and 6GB of RAM handled all tasks with ease. You can get 128 or 256GB of storage built into the tablet, and you can expand the storage by up to 512GB with a MicroSD card. That's good news for people who download lots of apps, games, and videos from Netflix and other services.

If you want to use it as a 2-in-1 tablet and laptop, you can get the compatible keyboard case, but it will cost you more. The tablet does come with the S-Pen stylus, so at least you don't have to pay extra for that.

It is an expensive tablet on the whole, but if you want a top-of-the-line Android tablet that will last you for years, it's a good option.

The best tablet for professionals 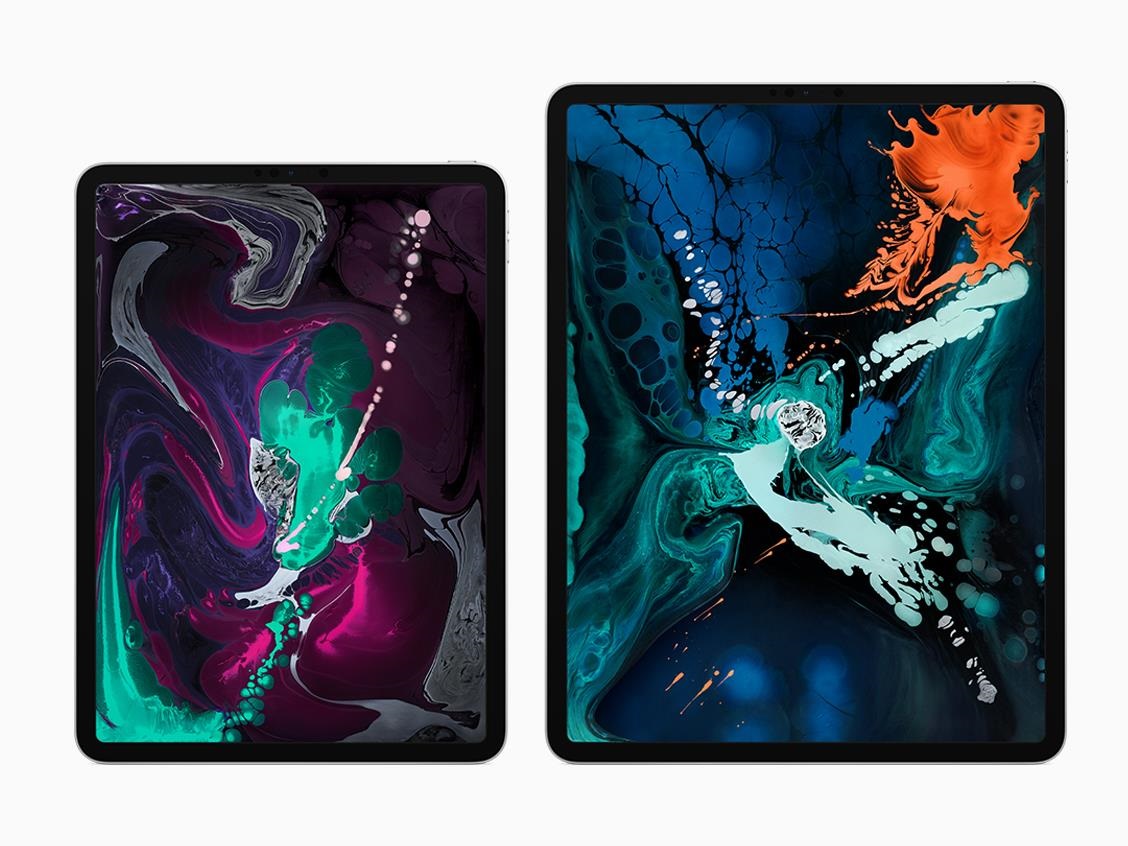 Apple's new iPad Pro comes in 11-inch and 12.9-inch sizes with specs that are so high-end they surpass some laptops.

The new iPad Pro is a work of art - it has slim bezels, a stunning sharp screen in two sizes, an absurdly powerful processor, and tons of great accessories to go with it, including the Apple Pencil. And most recently, the iPad Pro is the closest it has ever become to an actual laptop replacement - Apple finally gave it mouse support.

Regardless of which model you buy, the iPad Pro is a powerhouse. The A12Z Bionic processor is so high-powered it can surpass some laptops. Apple's entry-level model comes with 128GB of storage, but you can get up to 1TB if you want to spend a whole lot of money.

We recommend picking up the new Apple Pencil if you like to take notes or draw. It may cost extra, but it is worth it - The Pencil is the best stylus I've ever used, and the new version even charges wirelessly and magnetically attaches to your iPad for easy storage.

Apple's Keyboard will also cost you a pretty penny, so we recommend going for a third-party case and keyboard. - Malarie Gokey

The best tablet for kids If you feel a little nervous handing your mobile devices to your kids, the Amazon Fire 7 Kids Edition tablet comes with a tough case to keep it safe.

Kids aren't always the most careful when it comes to taking care of electronics. Just search YouTube for video of kids dropping smartphones in the toilet, and you'll see the tip of the iceberg of what kinds of destruction children can cause.

The Amazon Fire 7 Kids Edition provides a tough case that will protect the tablet, even if the child drops the tablet (as long as it's not dropped in a toilet). Laptop Mag says parents can feel comfortable allowing their children to use the Fire 7 because of the two-year accidental-damage warranty it comes with.

Although the sound quality of the Amazon Fire 7 Kids Edition tablet is below average, Wired says the small size of this tablet with a 7-inch screen works great for young children.

There's a lot of children's content on the Amazon tablet, along with several features for setting up parental controls, which is great. You will have to download the content through apps before accessing the content, but the tablet's simple interface works great for kids to operate on their own.

This admittedly isn't the most powerful tablet, as it features below-average processor speed and less-than HD resolution on the screen. But, kids aren't likely to complain, or even notice.

Pros: Great price for a tablet designed for kids, includes a tough exterior case that will protect the tablet if the child drops it, includes a two-year replacement warranty for any damage that occurs The iPad Mini may not have the new design, but it has all the new specs and it supports Apple's excellent Pencil stylus.

The 2019 iPad Mini is Apple's budget-friendly small tablet. It may not have the fresh new design we were hoping for - those thick bezels are still there along with the home button - but it has all the latest specs we wanted in this update.

It's powered by the ultra-powerful A12 Bionic chip, and it supports the first-generation Apple Pencil. We're thrilled Apple gave the Mini Pencil support, as it's the best stylus we've ever used, and it makes the Mini a great tablet for note taking or drawing.

The Mini's 7.9-inch Retina display has a sharp 2,048 x 1,536-pixel resolution, too, so you can really enjoy watching videos, reading, and creating on the screen.

You can choose between 64GB or 256GB of storage and three color options: Silver, Space Gray, or Gold). If you want to keep the price down, you can get the Wi-Fi-only version, but there is also a Mini with both cellular and Wi-Fi connections.

Read our review of the iPad Mini

How to pick the right tablet for you As with smartphones and laptops, you can choose among a few different types of operating systems with tablets. Picking the right OS will enhance your enjoyment of the tablet you select.

What to look for in a tablet

Tablets have a lot of different strengths, depending on the one you choose. Think about what you want to do with the tablet, and you'll be able to find one that'll perfectly meet your needs.

Check out our guide to the best iPads you can buy The best iPads you can buy

Apple is the uncontested king of tablets. The word iPad is synonymous with the word tablet. Chances are if you own a tablet at all, you have an iPad.

We've tested nearly every iPad that has been released over the past three years, and these are the absolute best iPads you can buy. You can also check out the best iPad cases for every type of person and read why we love the Apple Pencil.