10 of the most amazing LEGO creations

The LEGO brand is synonymous with creativity and construction. Though they're technically toys, those little plastic bricks have inspired some truly astounding creations. People all over the world are using LEGO bricks to produce art, architecture, and even robots.

Here are some of the most intricate and astounding LEGO creations ever.

Head to Germany to see this life-size LEGO Volvo The Volvo car can be found in Gothenburg, Germany.
Volvo Museum/Facebook

The Volvo Museum in Gothenburg, Germany is home to a full-size Volvo XC90 built completely out of LEGO bricks. The car was first created by designers from the LEGO company as part of a campaign to promote safe driving.

Creator Jamie Douglas used LEGO to recreate the Palace of Westminster in this 50,000-brick build. The structure took nine months to complete and faithfully reproduces the dramatic architecture of the famous landmark.

This milling machine is made almost entirely out of LEGO Artist Arthur Sacek went above and beyond for this functioning LEGO milling machine.
Arthur Sacek/YouTube In 2013, Steve Sammartino of Melbourne and Raul Oaida of Romania unveiled a life-size LEGO car that can reach speeds of up to 20 mph. The build is called the Super Awesome Micro Project, runs on compressed air, and cost $22,000 to construct. Though the car uses more than 500,000 LEGO bricks for its frame, it also incorporates non-brick elements like rubber tires and metal gauges.

This eerily lifelike LEGO sculpture of a seated blue man was made by artist Nathan Sawaya. LEGO bricks have been Sawaya's medium of choice for a number of pieces. All you have to do is take a trip to Disney World to see Brickley.
Josh Hallett/Flickr

Guests traveling to Disney World can check out a giant rendering of green sea serpent rising from the Lake Buena Vista Lagoon. Affectionately known as Brickley, the fantastical creature is made out of more than 170,000 bricks and took more than 5,000 hours to build.

Superb idea for creating the effect of a reflection! Seen at @Brickvention, designed by Arthur Gugick pic.twitter.com/l4zH4oFB18

Arthur Gugick presented this magnificent rendering of the Taj Mahal at Brickvention in 2016. The model even includes an illusion of the building's reflection in a LEGO pond.

This staggering LEGO creation brings an alien city to life The creation can be found on Kickstarter.
Mike Doyle/Kickstarter

"Contact 1" is a massive fantasy cityscape created by Mike Doyle. Using over 200,000 LEGO pieces, the city is meant to represent a place where "humans use ancient rituals…to initiate communication with the great space-faring cultures of the universe." Through the project's Kickstarter page, Doyle offered backers DIY kits that allowed them to recreate portions of his creation.

This model of the sinking Titanic is so intricate Fans gawked at the creation at the Australian 2016 convention.
BrickLink/Twitter

A huge model of the legendary Titanic appeared at a LEGO convention in Australia in 2016. The creation featured LEGO figures making their escape in life rafts and sliding across the decks, as well as a glimpse into the interior of the sinking ship.

The Wall from "Game of Thrones" looks amazing in LEGO 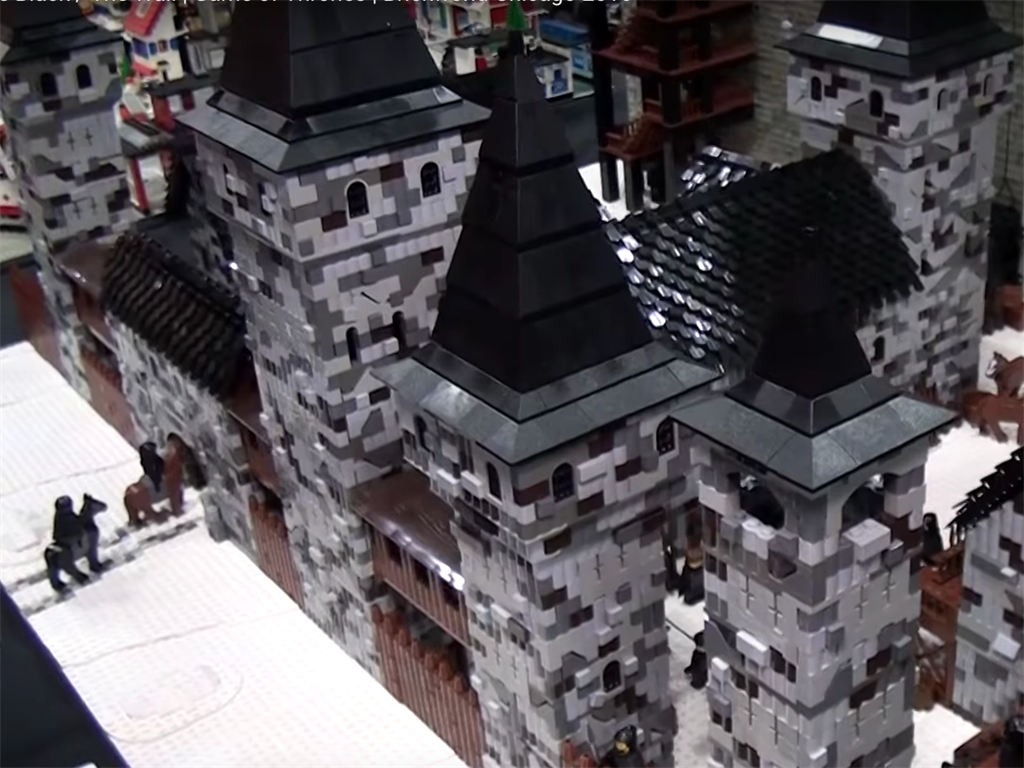 Creator Matthew Greene built a towering model of the The Wall and Castle Black from "Game of Thrones" for the Brickworld Chicago convention in 2016. The build comes complete with LEGO members of the Night's Watch and a functional lift to transport figurines up the glittering side of The Wall. The roof of Castle Black is actually made of hundreds of tiny LEGO swimming flippers.