If you're searching for an all-natural way to lift your mood, preserve muscle tone, and protect your brain against the decline that comes with ageing, look no further than the closest mirror.

One of the most powerful means of reaping these benefits is exercise — and in many cases, you already have everything you need to get it: a body.

As we age, two forms of exercise are the most important to focus on: aerobic exercise, or cardio, which gets your heart pumping and sweat flowing, and strength training, which helps keep ageing muscles from dwindling over time.

And most of the time, they don't require any fancy equipment or expensive classes.

Read on to find out how to incorporate both forms of fitness into your life.

Aerobic exercises like jogging may help reverse some heart damage from normal ageing. Many of us become less active as we age. Over time, this can lead some muscles in the heart to stiffen.

One of those at-risk muscles is in the left chamber of the heart, a section that plays a key role in supplying the body with freshly oxygenated blood.

A recent study split 53 adults into two groups, one of which did two years of supervised exercise four to five days a week while the other did yoga and balance exercises.

At the end of the study, published in January in the journal Circulation, the higher-intensity exercisers had seen significant improvements in their heart's performance, suggesting that some stiffening in the heart can be prevented or even reversed with regular cardio.

"Based on a series of studies performed by our team over the past 5 years, this 'dose' of exercise has become my prescription for life," Benjamin Levine, a professor of internal medicine at the University of Texas Southwestern who wrote the study, said in a statement.

Strength-training moves like tai chi are best for preserving muscles from age-related decline. 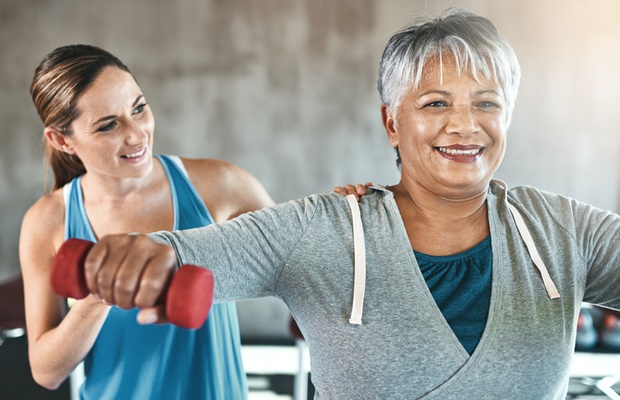 Strength or resistance training can take many forms, but it typically involves a series of movements geared toward building or preserving muscle.

Tai chi, the Chinese martial art that combines a series of flowing movements, is one form of strength training. The exercise is performed slowly and gently, with a high degree of focus and attention paid to breathing deeply. Since practitioners go at their own pace, tai chi is accessible for a wide variety of people, regardless of age or fitness level.

Tai chi "is particularly good for older people because balance is an important component of fitness, and balance is something we lose as we get older," I-Min Lee, a professor of medicine at Harvard Medical School, said in a recent health report called "Starting to Exercise."

There may be a powerful link between regular cardio, like swimming and walking, and a lower risk of dementia. A study published in March in the journal Neurology suggested that women who were physically fit in middle age were roughly 88% less likely to develop dementia — defined as a decline in memory severe enough to interfere with daily life — than their peers who were only moderately fit.

Starting in 1968, neuroscientists from the University of Gothenburg in Sweden studied 191 women whose average age was 50. First, they assessed their cardiovascular health using a cycling test and grouped them into three categories: fit, moderately fit, or unfit. Over the next four decades, the researchers regularly screened the women for dementia. In that time, 32% of the unfit women and a quarter of the moderately fit women were diagnosed with the condition, while the rate was only 5% among the fit women.

However, the research showed only a link between fitness and decreased dementia risk — it did not prove that one caused the other. Still, it builds on several other studies that suggest a powerful tie between exercise and brain health.

Activities like cycling may also protect your immune system from some age-related decline. For a small study published in March in the journal Aging Cell, researchers looked at 125 amateur cyclists aged 55 to 79, comparing them with 75 people of a similar age who rarely or never exercised.

The cyclists were found to have more muscle mass and strength and lower levels of body fat and cholesterol than the sedentary adults.

The athletic adults also appeared to have healthier and younger-looking immune systems, at least when it came to an organ called the thymus that's responsible for generating key immune cells called T cells. In healthy people, the thymus begins to shrink and T-cell production starts to drop off at around age 20.

The study found that the thymus glands of the older cyclists looked as if they belonged to younger people — their bodies were producing just as many T cells as would be expected for a young person.

"We now have strong evidence that encouraging people to commit to regular exercise throughout their lives is a viable solution to the problem that we are living longer but not healthier," Janet Lord, the director of the Institute of Inflammation and Aging at the University of Birmingham in the UK, said in a statement.

Other types of strength training can include moves like planks and squats. At its most basic, strength training involves using weight to create resistance against the pull of gravity. That weight can be your own body, elastic bands, free weights like barbells or dumbbells, or weighted ankle cuffs.

Research suggests you can use heavy weights for fewer reps or lighter weights for more reps to build stronger, more sturdy muscles.

Chris Jordan, the exercise physiologist who came up with the viral seven-minute workout — officially called the Johnson & Johnson Official 7-Minute Workout — told Business Insider that healthy adults should incorporate resistance training on two or three of the four or five days a week they work out.

Cardio workouts may also improve the look and feel of your skin. A study from researchers at McMaster University found that people over 40 who regularly did cardio tended to have healthier skin than their sedentary peers. The overall composition of the regular exercisers' skin was more comparable to that of 20- to 30-year-olds. It's not yet clear why our workouts appear to play a role in skin health, but the researchers found elevated levels of a substance critical to cell health called IL-15 in skin samples of participants after exercise — perhaps shedding light on why cardio can improve the look of our skin.

Aerobic workouts may guard against age-related decline because of reduced brain connectivity. As we age, the brain — like any other organ — begins to work less efficiently, so signs of decline start to surface. Our memory might not be quite as sharp as it once was, for example.

But older people who develop Alzheimer's disease often first enter a stage known as mild cognitive impairment, which involves more serious problems with memory, language, thinking, and judgment. A study published in May looked at adults with MCI between the ages of 60 and 88 and had them walk for 30 minutes four days a week for 12 weeks.

The researchers found strengthened connectivity in a region of the brain where weakened connections have been linked with memory loss. That development, they said, "may possibly increase cognitive reserve" — but more studies are needed. A study of older women with MCI found a tie between aerobic exercise and an increase in the size of the hippocampus, a brain area involved in learning and memory.

For the study, 86 women between 70 and 80 years old with MCI were randomly assigned to do one of three types of training twice a week for six months: aerobic (like walking and swimming), resistance (like weight lifting), or balance.

Only the women in the aerobic group were found to have significant increases in hippocampal volume, but more studies are needed to determine what effect this has on cognitive performance.