18 beautiful photos of motherhood in the animal kingdom 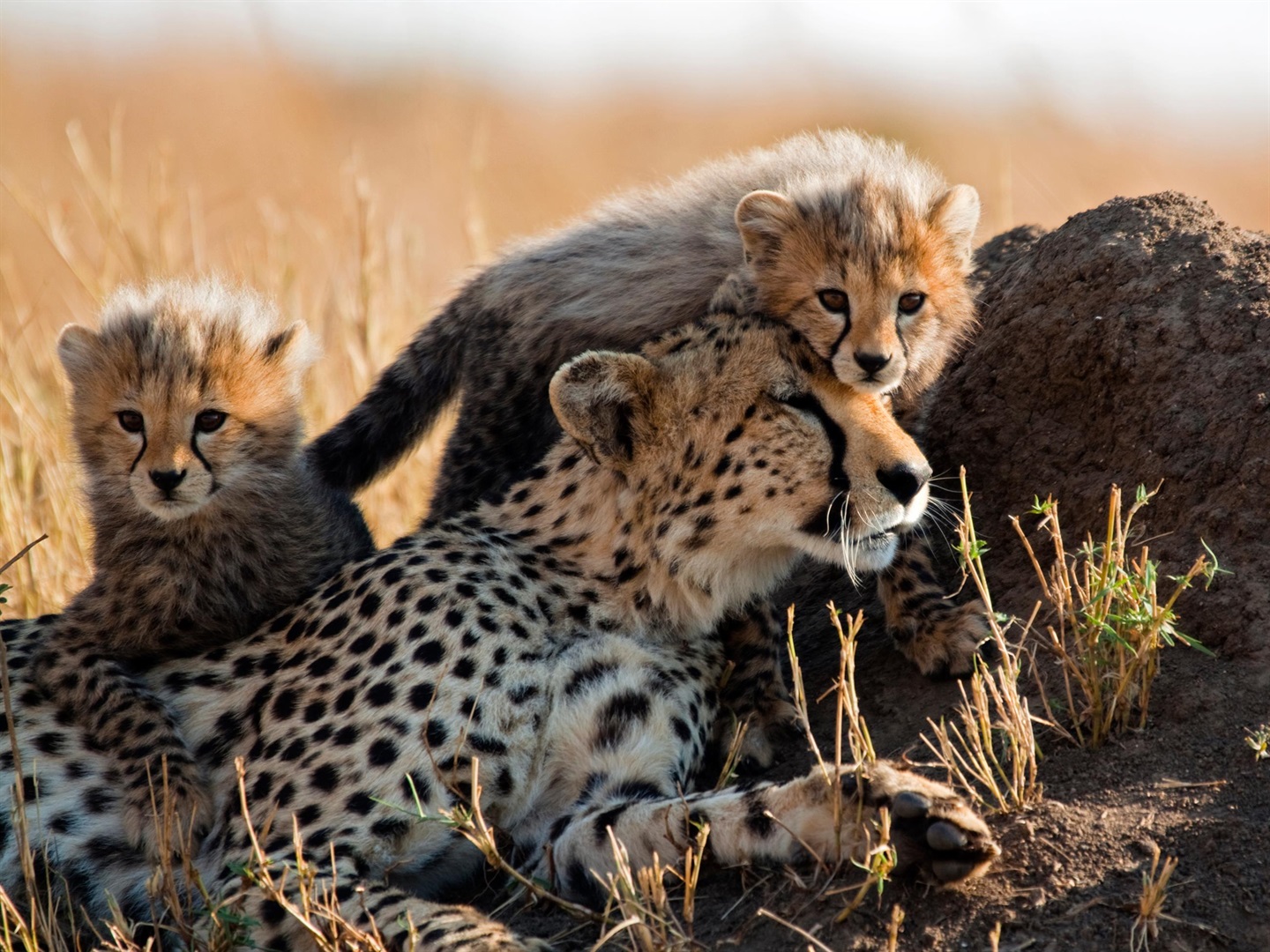 A cheetah with her cubs.
WLDavies/Getty Images

Mom knows best, and that's true in the animal kingdom, too. Mothers in the natural world raise their offspring and instill in them the skills they need for survival - sometimes alone and sometimes with the help of a group.

Photographers around the world have captured these incredible relationships in play, from a mother panda gently nuzzling her tiny cub, to a momma dolphin guiding her offspring through the water.

Ahead of Mother's Day, here are 18 beautiful photos of motherhood in the animal kingdom.

Female polar bears raise their cubs alone and are extremely protective of them. 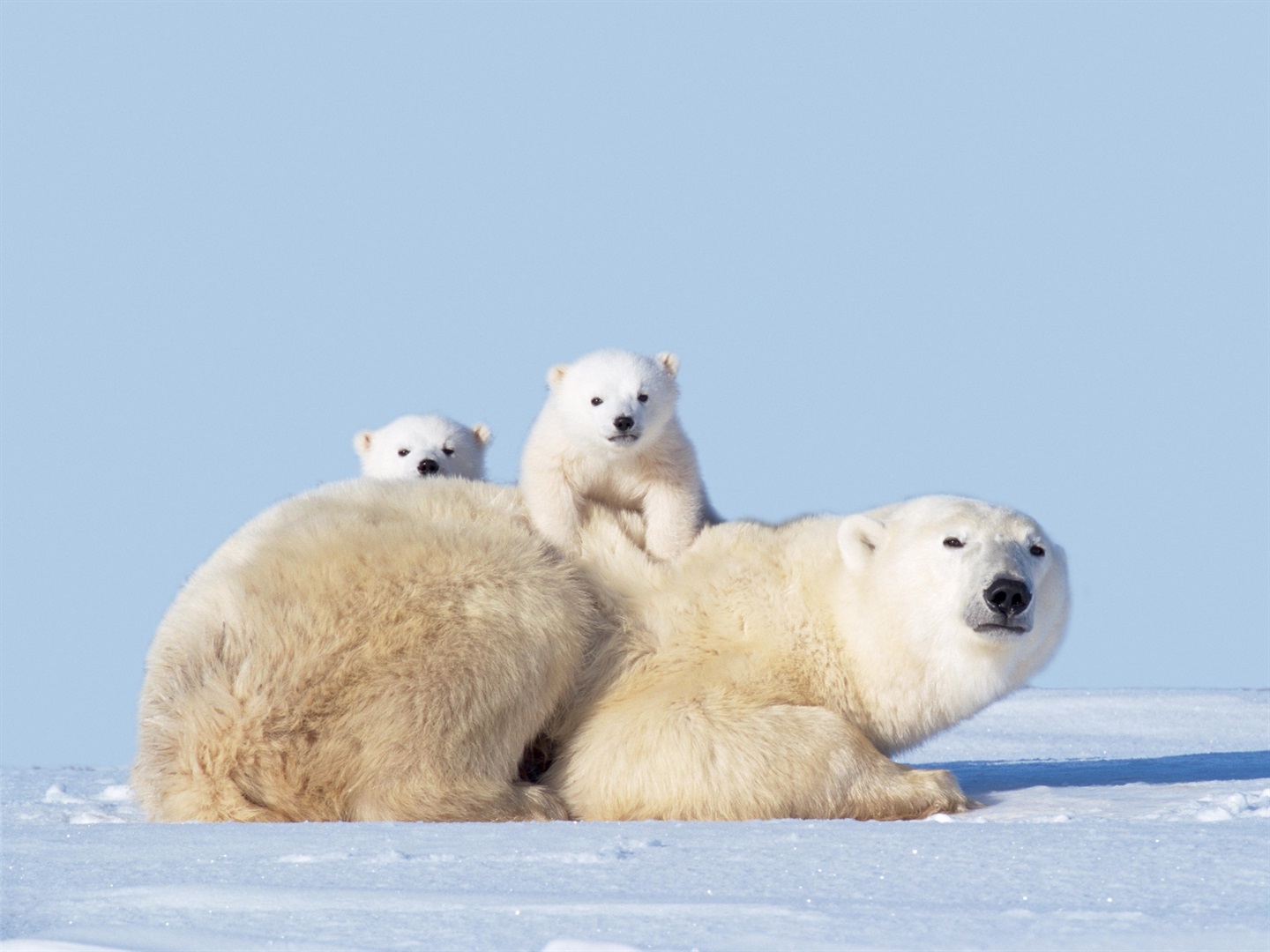 As previously reported by Insider, male polar bears play almost no role in a cub's life - there have even been reports of males killing young cubs. A female polar bear cares for her cubs for the first 28 months of their lives, teaching them how to hunt and other skills needed to survive.

Cheetahs are also single mothers, raising a litter of three to five cubs in solitude. According to Dell Cheetah Centre, cheetahs are solitary creatures with males and females only interacting during mating season. When cubs are born, they are blind and helpless, dependent on their mother to survive.

Every few days the mother will move her litter to prevent predators from tracking their scent. Despite these efforts, cub mortality is high in the first six weeks because the mother will leave them alone to hunt, according to USA Today.

Cubs live with their mother until they're 16 to 24 months old.

Like humans, female orangutans form a strong, long-lasting bond with their offspring. According to Orangutan Foundation International, infant orangutans are completely dependent on their mothers for the first two years of life. They will cling to their mother's stomach, side, and back as she moves through the jungle.

Orangutans remain with their mother until they're around 10 years old, and female orangutans have been known to make frequent return trips to visit their mothers until they are 15 or 16.

Baby porcupines are called porcupettes, and mothers usually have between one and four at a time. According to National Geographic, a newly born porcupine will have soft quills, but they will harden after only a few days. Porcupines live with their mothers for two months before they're ready to strike out on their own.

Female opossums will carry their litter on their backs. According to National Geographic, opossums are as small as honey bees when born and develop in their mother's pouch after birth. Opossums may give birth to more than 20 in a litter, but less than half survive.

Raising offspring is a family affair for red foxes. According to Live Science, red fox pups are raised equally by both the mother and father. Older siblings will also sometimes lend a hand by bringing them food. When pregnant, the female fox will form a nursing chamber inside her burrow.

Unlike some reptiles, female alligators are protective of their young and will carry their eggs in their snout to assist in hatching. A female alligator will lay between 10 and 50 eggs. Before doing so, she will build a nest from mud, sticks, and plants. The temperature of the nest determines the sex of the hatchlings, and the female will try to achieve a temperature in the nest that produces both male and female offspring.

When it comes time for the eggs to hatch, the mother will carry the hatchlings down to the water. She will also carry any eggs that haven't hatched, rolling them in her mouth in an attempt to help them open up.

Female emperor penguins will travel up to 50 miles (80 km) to bring food back for their young. 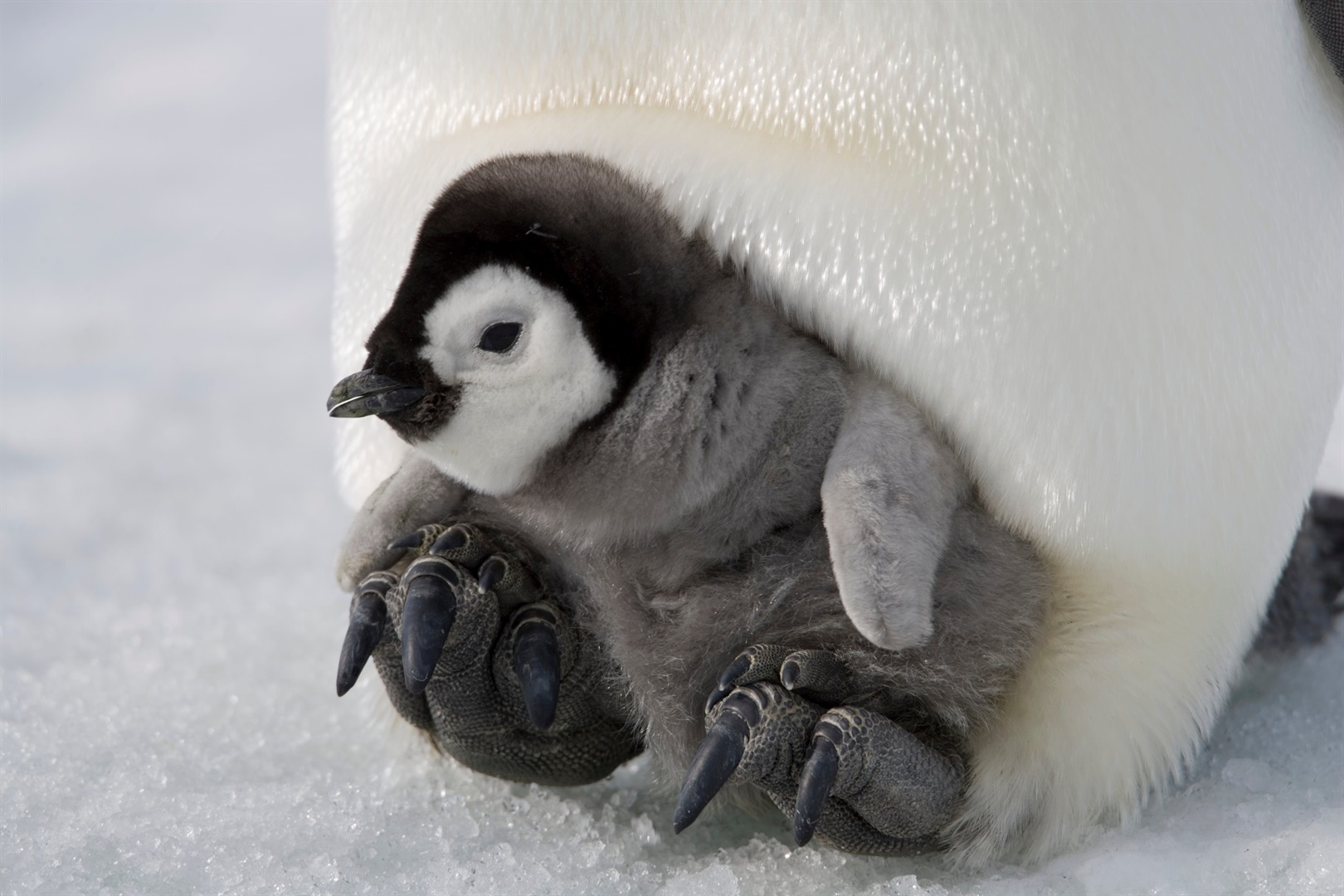 According to National Geographic, a female emperor penguin will leave her egg with the male to protect it while she leaves the breeding site to fish. The mother will return and regurgitate her meal to the newly hatched chick.

The male emperor penguin will depart, leaving the female to raise their offspring. Mothers will protect their young from the elements with the warmth of their brood pouches.

Female koala bears shelter their newborns in their pouches for six months. According to National Geographic, a koala bear is about the size of a jelly bean when born. Hairless, no ears and blind, a joey will spend six months in its mothers pouch until developed enough to come out. Afterwards, they'll stay close to their mothers, often riding on their mothers' backs. 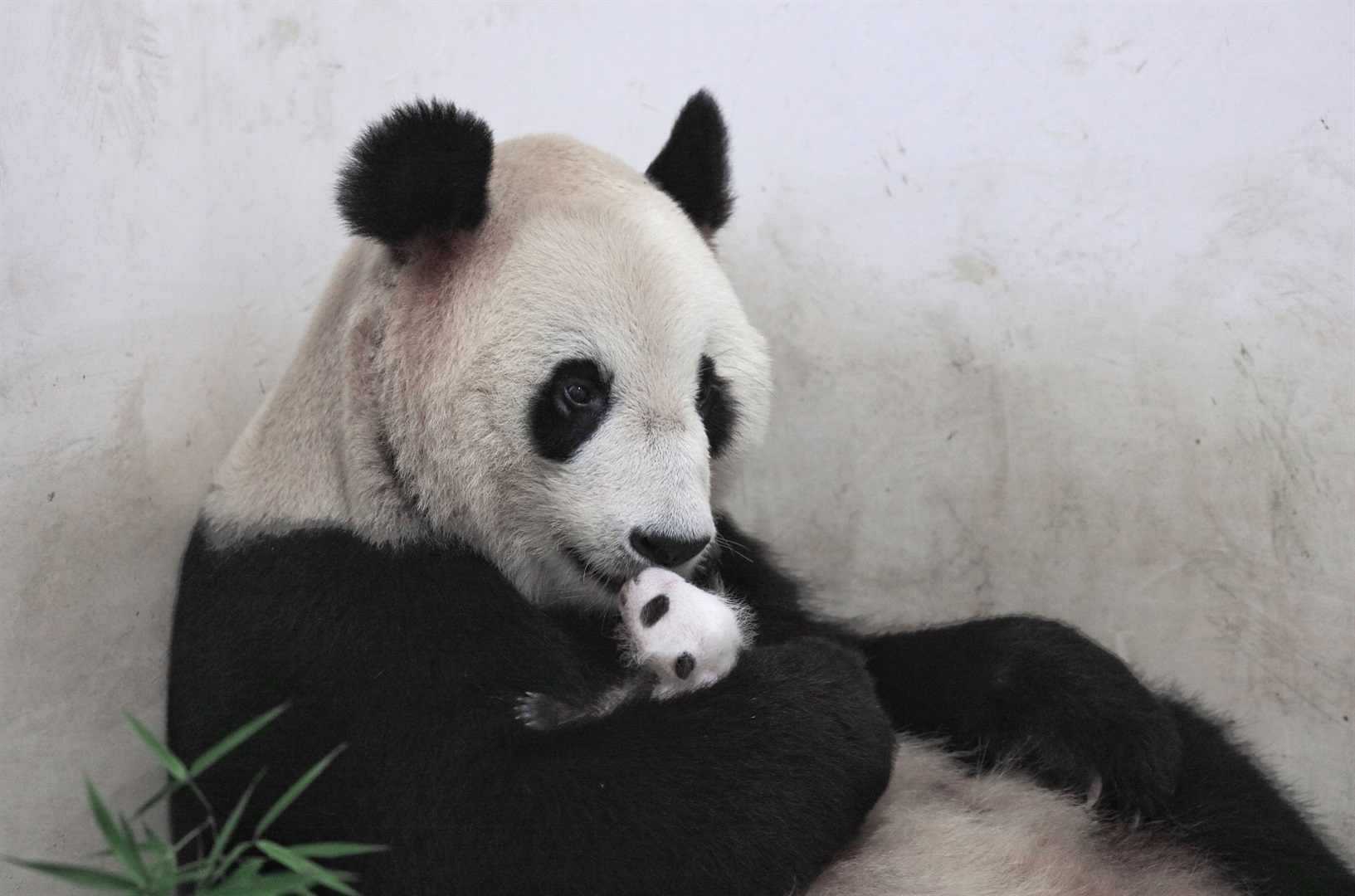 When born, a panda cub weighs only around 3 to 5 ounces (85 to 141 gram). In comparison, an adult panda can weigh up to 300 pounds (136kg). Mothers will handle their cubs with extreme care, rarely putting it down between feedings.

According to the World Wide Fund for Nature, panda cubs will live with their mothers until they are 18 months old. Sometimes mothers will have twins, but they are unable to care for both animals so will often abandon one, according to BBC Earth.

Both the female bison and her offspring live in a herd. According to Live Science, the herd protects both mother and child from outside threats. A female bison will give birth after nine months to typically one calf, who will mature by 2 or 3 years old. "It takes a village" for elephants. The extended family is led by an older female, who helps to shepherd the others and their young, according to PBS. When they turn 14, male elephants leave the herd to either range alone or join other males in what are known as "bachelor herds."

When they're born, calves have poor eyesight but can recognise their mothers through scent, touch, and sound, according to Thought Co. They weigh around 250 pounds (113kg) when born. The mother is responsible for feeding the calf, but the entire herd protects them from predators.

Both male and female great egrets help incubate their eggs in the nest. According to the National Park Service, female great egrets are gentle mothers despite their size. Egret chicks will nest for three weeks before taking small excursions through the trees and eventually taking their first flights at 5 to 6 weeks old.

When nursing their young pups, elephant seals don't eat anything. According to National Geographic, female elephant seals, after an 11-month pregnancy, give birth to a single pup in late winter and will nurse it for a month. They both sustain themselves off the energy the mother managed to reserve in her blubber.

Female dolphins will guide their calves through the water. According to Sciencing, a calf will follow in its mother's slipstream, a wake that forms as the mother swims, allowing both to keep up with other dolphins. Female dolphins will also receive help from their own mothers in raising their young.

Sperm whale pods will defend mother and infant when a whale is giving birth. According to Oceanwide Expeditions, female sperm whales and their offspring live in pods of up to 20 members. Males will typically leave this pod when they're 4 years old to form their own pod with other males or strike out on their own.

When a whale is giving birth, members of the pod will form a defensive barrier around her to protect against predators.

A female kangaroo protects her offspring by carrying them in her pouch. According to Live Science, a kangaroo is about the size of a grain of rice or bumble bee when it is born. The mother will nurse the young joey in its pouch between 120 to 450 days while it continues to develop.

Desert bighorn sheep raise their young in a nursery system of 25 to 100 sheep. According to the National Park Service, the bighorn sheep have their young in high terrain to protect them from predators. A couple of the sheep will stay with the young while the other females go to feed. The female sheep will trade responsibilities until the lambs are old enough to eat solid food and travel with their mothers at 6 months old.