I'm a bartender, and here are 11 signs your drink was made improperly One thing I quickly learned as a bartender: You're doing a lot more than just making drinks on the job.

And the standard for every drink we send out is sky-high: We want to deliver you a perfectly constructed drink, in the perfect vessel, at the perfect temperature, and with the perfect timing within seconds of one another when a multiple-drink order is in play.

We always try our best, but within the harsh standards of the craft cocktail world, and a long and ever-growing list of rules to bartend by, we at times fall short. Particularly as a baby bartender, I was prone to forgetting a crucial ingredient, shaking a cocktail that was meant to be stirred, or watering down a martini with way too long a stir.

With that in mind, be kind if you spot any of these trademark blunders we're prone to making when we're preparing your drink. Here are 11 of the telltale signs you've been served an improperly made drink.

Something's wrong if your gimlet, cosmo, or other shaken cocktail isn't ice cold. Unless the cocktail you've ordered is served on the rocks, any shaken cocktail should come out of the bartender's tins ice cold.

I'll explain why in more detail later, but as far as making a citrusy cocktail, they're shaken. Always.

This is an easy rule for bartenders to embrace, as shaking is a far quicker chilling process than stirring - roughly half the time. And in this profession, every second counts.

So if your gimlet, cosmo, or other shaken cocktail served in a dainty coupe isn't as cold as if it were coming straight out of a minus-5-degree-Celsius freezer, the bartender's shake was either too weak, too short, or both.

On the other hand, your martini or Manhattan definitely should not be ice cold.

In the bartending world, there's a corollary to shaking-until-ice-cold. A stirred drink served "up" is not served as cold as possible. For that reason, expertise in the science of the stir is a must for every bartender.

When you're shaking a cocktail, you can gauge when you're done by the way the ice sounds in the tin. It's never going to take a very long time - less than 15 seconds - to accomplish.

But when we stir a cocktail served up like a martini or Manhattan, we want to serve your beverage almost as cold as possible. Why? Unlike shaking, a stirred cocktail's trademark aromatic qualities and booze-forward appeal plummet when swirled to peak coldness.

So as we stir over the course of 30 seconds to a minute and a half - depending on how fast our fingers are - we might take a little taste of the drink with a straw once, or even multiple times.

No, it's not to get a buzz going, but rather, to test the temperature and dilution so we can stop stirring exactly when perfect. Not a second before or after.

'Shaken or stirred?' is a question you should never hear back when you order a martini. "Vermouth or no vermouth?"

These are all acceptable questions when you've ordered a martini.

"Shaken or stirred?" is not one of them. Not even if your name is James Bond.

So if your martini gets shaken without a specific request, that's a huge no.

Why does it matter?

Furthermore, like in the world of cuisine, texture can be as important to a drink experience as taste.

A stirred drink has a deliciously silky texture on your lips that an aerated, shaken drink lacks.

However, if you're ordering a dirty martini, feel free to specify shaken or stirred. But what about dirty martinis? Those are mostly booze. No citrus. No sweetener. Just gin or vodka, dry vermouth, and olive brine.

Frankly, as bartenders, we can't come to a consensus as to whether to shake or stir a dirty martini.

Because to be clear, stirring a drink that's meant to be shaken is just as big a no-no as the reverse.

You know how when you buy a smoothie in the grocery store, the label often says to shake first? That's because separation is natural when it comes to juices. If those types of drinks were stirred, not shaken, the ingredients might remain stubbornly separate from the other components.

So while shaking a martini of any variety feels like sacrilege, it makes sense in this case. Olive brine is a sort of juice, after all.

As such, feel free to apply your new cocktail knowledge to this conundrum: Go for stirred if you want your dirty martini more warm, less diluted, and with possibly not-entirely-incorporated olive brine.

Ask for it shaken if you want a more cold, mellow cocktail with an aerated texture and thoroughly mixed in olive juice.

Your beer lacks a foamy head. I had to consult my more beer-minded colleagues for this one, since, despite living in the US city with the second most breweries per capita, I apparently still suck at impeccable beer pouring and glassware pairing.

For most German-style and Belgian-style beers, there should be around two to three inches of foamy head. Extra points for appropriate glassware, when available.

Any other beer pour should have half an inch of foamy head. So the idea that a perfect beer pour is completely clear of foam is pure myth.

In my experience, customers sometimes scoff at that much foam in their beer, and some view it as a petty way for bars to save on their beer budget.

But that's not true. The foam actually acts as an aromatic track, making your sensory introduction to the sips of beer to follow more vivid.

Even if you don't care a whiff about a sensory experience, you should still desire a foamy head on your beer. Because if the CO2 isn't released in the glass, it will be far less pleasant in your stomach.

If your glass of wine tastes off, there's a chance the bottle was corked. Corked wine is essentially when wine has gone bad because of a chemical interaction that happened between the outside world and the cork.

One joy of training in the food service industry is tasting your bar's corked wine on purpose so that you know what to look out for.

People often have their own reference for the specific smell evoked (think something like "my great aunt's attic in the summer," for example), but it might resemble something like wet cardboard or newspaper.

The hope, of course, is to stop bad wine from ever reaching your taste buds. But during a busy shift, we occasionally miss these bad glasses before they're placed in front of you.

The colour of your cocktail can be a dead giveaway for a poorly made one.

The cosmopolitan, the cocktail made famous by "Sex and the City," is distinctly pink. Always. So if a light-yellow cocktail with a sugar rim pops out after you ordered a cosmo, the bartender probably just flubbed what the order was in their mind.

If, on the other hand, you order a cosmo and it arrives to you in a barely-there hue of light pink, your bartender instead has a seriously wrong idea of what the ratio of cranberry to vodka to lime to orange liqueur is in a cosmo.

You ordered a drink with the word 'Collins' in it, and it arrives in a short glass. 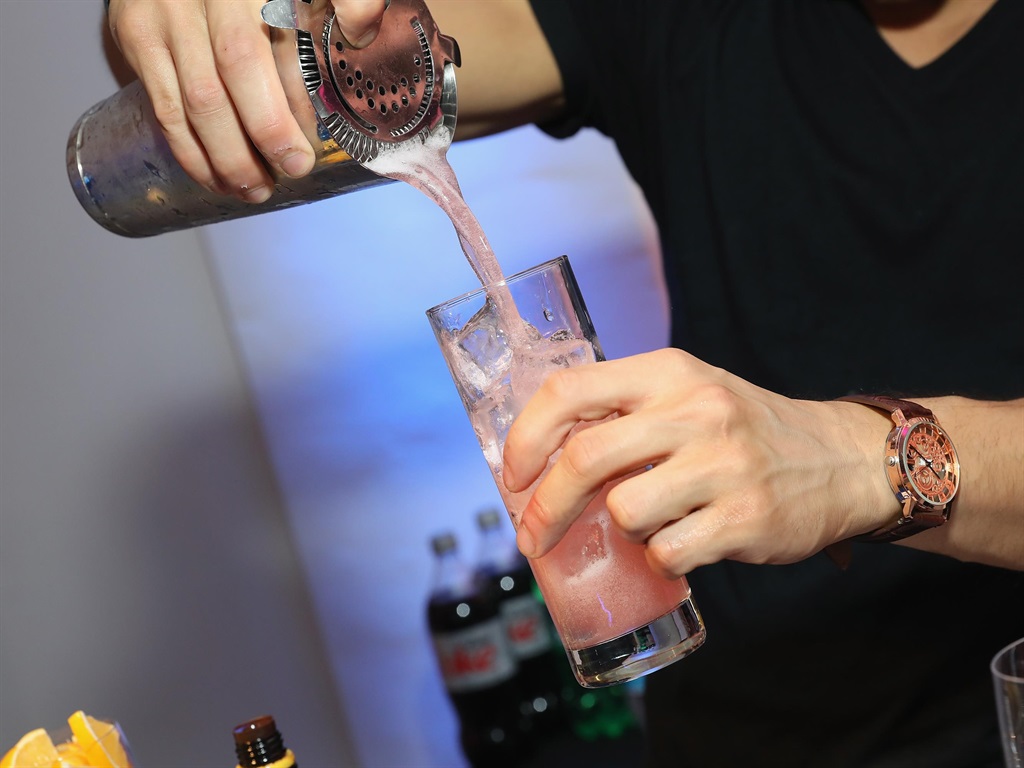 The cocktail gods are sometimes merciful when it comes to naming drinks.

For example, a Tom Collins comes in a Collins glass, whose height and length keep the carbonation more fizzy. Easy! And yet, we still occasionally fail to pair a cocktail with its proper glassware, even when it's in the name.

For instance, I didn't realise for a longtime that highball cocktails were meant to come in tall glasses. This seems rather obvious in retrospect.

Another common drink you see put in the wrong vessel are Sazeracs, which despite famously being served without ice, are served in an ice-friendly "rocks" tumbler.

I suspect this to be one of the reasons that, in my experience, men love to order Sazeracs far more than other iceless cocktails, which are usually served in stemmed glassware: for fear of judgment.

Your extra-dry martini tastes suspiciously light and funky, rather than like three ounces of chilled gin or vodka.

The traditional martini usually has somewhere between half an ounce to one ounce of dry vermouth.

An extra-dry martini, on the other hand, is essentially three ounces of chilled gin or vodka served in a fanciful glass with a lemon twist or olive. A dry martini might either have a small amount of vermouth, say, a quarter of an ounce, or even less, like a simple vermouth "rinse" that's swirled around the inside of the glass.

Unfortunately, this terminology can be confusing. I've met more than one bartender who at one point thought that a dry or extra-dry martini meant adding extra-dry vermouth to the drink.

Be wary of this misconception when ordering a martini extra dry, or simply ask for "no vermouth" to avoid it.

You ordered a Ramos Gin Fizz and it took less than seven minutes to make. So if you get one on the fly, you shouldn't be as dazzled as you would be by the proper, time-consuming version, which you also absolutely shouldn't request from a busy bartender to look impressive.

Your drink isn't what you ordered. Be careful how you order drinks like a greyhound, which can just as easily be ordered as a "vodka grapefruit."

A baby bartender too sheepish to ask for clarification from you, a colleague, or the internet may confidently give you what they think is a greyhound, when it in fact is not.

In my case, I once served a guest a tequila and grapefruit "greyhound" that was promptly, rightfully sent back.

I've also forgotten to add mint to a mojito before. Which means that in essence, I didn't make a mojito - I made a daiquiri with a splash of soda.

Fortunately, if you spot these errors, they're easy to fix. And we want to fix them. Whether we messed up, or you just plainly didn't like or expect what we made you, always being right is a huge perk of being on your side of the bar.

But if you want the best outcome, go ahead and use some tact when it comes to sending back that shoddy drink we made you. After all, a little courtesy goes a long way.