Children were at the forefront of the protest in Sydney.
Getty Images
Australians from across the country gathered on Friday as part of a global climate protests being held around the world.

Students, teachers, activists and people from all walks of life came together for the first rounds of protests in the southern hemisphere kick-off. The Friday protests were started by 16-year-old Swedish climate activist Greta Thunberg, who protested outside the Swedish parliament.

In capital cities around Australia, including Sydney, Melbourne, Brisbane, Adelaide, Canberra, Darwin, and Hobart, people prepared signs and chanted slogans in favour of swift climate action. Hundreds of thousands of protesters were expected across the country, with businesses encouraging their staff to take time off to attend.

It is a protest led by the youth, who were out in force at the protests and spoke to Business Insider about their motives for protesting.

"I want to ensure a better world for myself and my future kids," Steffanie Tan, 22, of Melbourne, said. "If we don't stand up to our government now, then we might not have a future to look forward to."

Student Kate McNess, 17, said, "It's an important issue and it's our future." While, 17-year-old student Nishtha Sharma said it was the only way she knew how to speak up. "This is basically the only way to have our voice heard," she said.

Thousands of people gathered at The Domain in Sydney. Many used humour in their signs to get their point across. 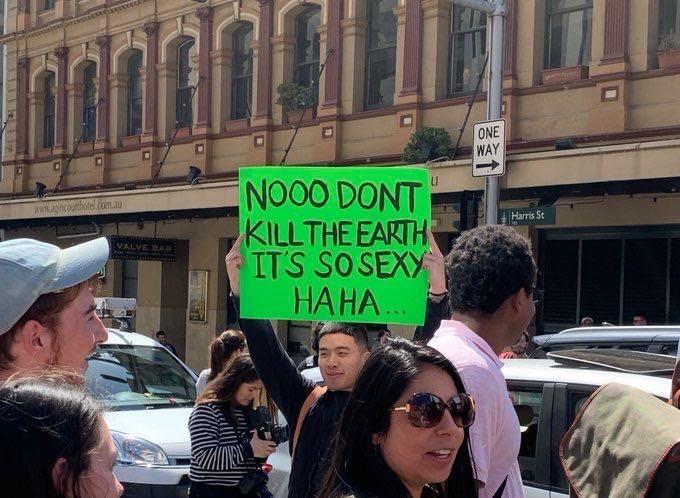 Other protesters shared their fears for the future in their signs. Sometimes all you need is three letters: O No. And many truths were spoken. Others paid their respects to the 16-year-old climate activist, Greta Thunberg. Students were at the centre of the protest. It was hard to avoid the reality of what happens for the next generation. Protesters walked over the Victoria Bridge in Brisbane in huge numbers.

In Brisbane, Queens Gardens became so overcrowded that people began spilling into the street.

Queens Park can no longer hold the Brisbane #ClimateStrike pic.twitter.com/FI4hzxSuuw

Thousands of people flooded the streets of Melbourne.

And the crowd continued to swell.

While the crowd in Sydney was estimated to be 50,000 people.