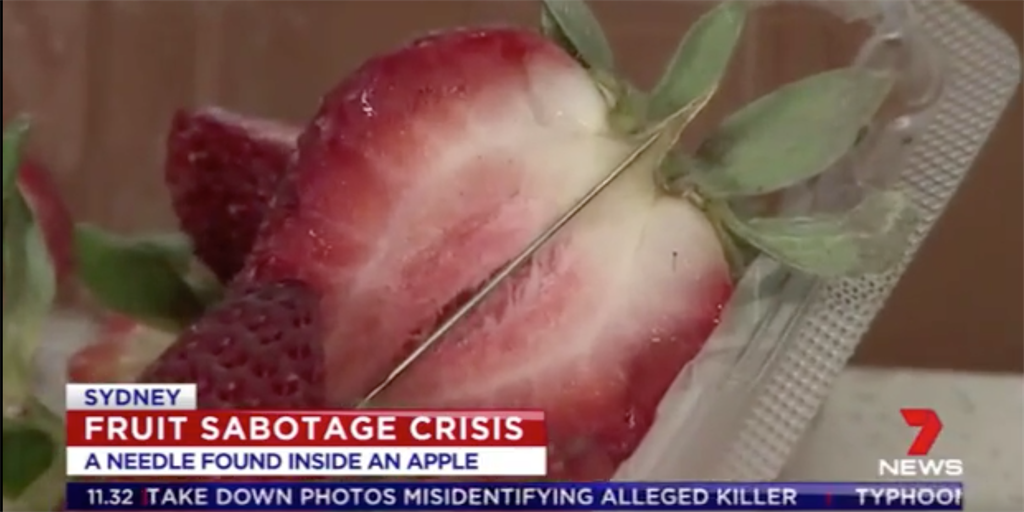 A needle in a strawberry.
7 News/Youtube
Australian strawberries containing sharp metal and needles have been discovered in New Zealand and Singapore - the first international reports since more than 100 people reported finding them in Australian fruit during September.

The Straits Times reported a man finding a sharp metal wire in a punnet of strawberries imported from Perth, Australia, and bought in Mahota, Singapore, on September 19.

See also: People hiding needles in strawberries in Australia have started putting them in other fruit too

The Agri-Food and Veterinary Authority of Singapore (AVA) is looking into the case, The New Paper reported.

The paper also reports that Sheng Siong, the third biggest store in Singapore, requested that suppliers use metal detectors to check each punnet of strawberries.

Singapore is almost 3,900 kilometres away from Perth on Australia's west coast, where the strawberries came from.

Closer to Australia, TV New Zealand 1 reported on Sunday that multiple needles had been found in one punnet of strawberries sold at a Countdown store in Auckland.

CNN then reported that the chain had stopped importing Choice brand Australian strawberries as a result on Sunday. 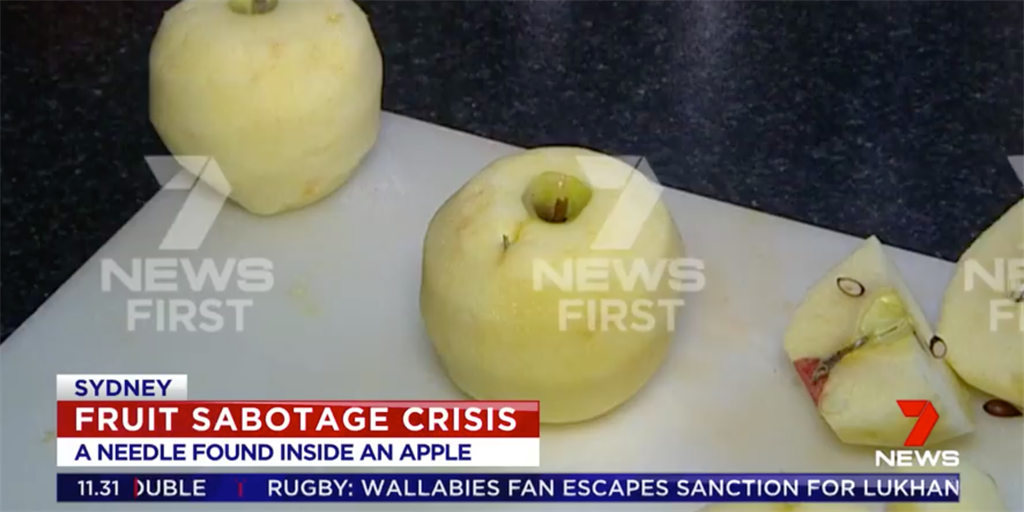 A needle was found in an apple.
Channel 7 News

There have been over 100 reports across every Australian state of needles and sharp metal objects hidden in strawberries, an apple, a banana, an orange, and a mango, since a man found a needle in a Queensland strawberry on September 9.

On September 19, Australian Prime Minister Scott Morrison said anybody who hid a needle in a strawberry was "a coward and a grub."

"It's not a joke. It's not funny," he told reporters. "You are putting the livelihoods of hardworking Australians at risk, and you are scaring children."

He added: "And if you do that sort of thing in this country, we will come after you, and we will throw the book at you."

The Australian government is so concerned it changed the law on September 20 - people can now get 15 years for contaminating fruit, and 10 for hoaxes and pranks.

Australian people are trying to support strawberry farmers by finding new ways to eat strawberries safely, like cutting them with an egg slicer.

The governments of Western Australia, New South Wales, and Queensland are all offering a reward of 100,000 Australian dollars, or $72,000, for information.

The police said on September 19 that they had arrested one person in connection with the phenomenon.

"In the last two days we found a young person [who] has admitted to a prank, including putting needles in strawberries, and he'll be dealt with under the youth cautioning system," Stuart Smith, a senior officer in the New South Wales police force, said, according to News.com.au.

Australia's biggest supermarket chain Woolworths announced on September 20 that it was temporarily removing needles from sale. All 995 Woolworths branches were affected.