A month after a mysterious monolith was discovered, at least 87 more have appeared around the world 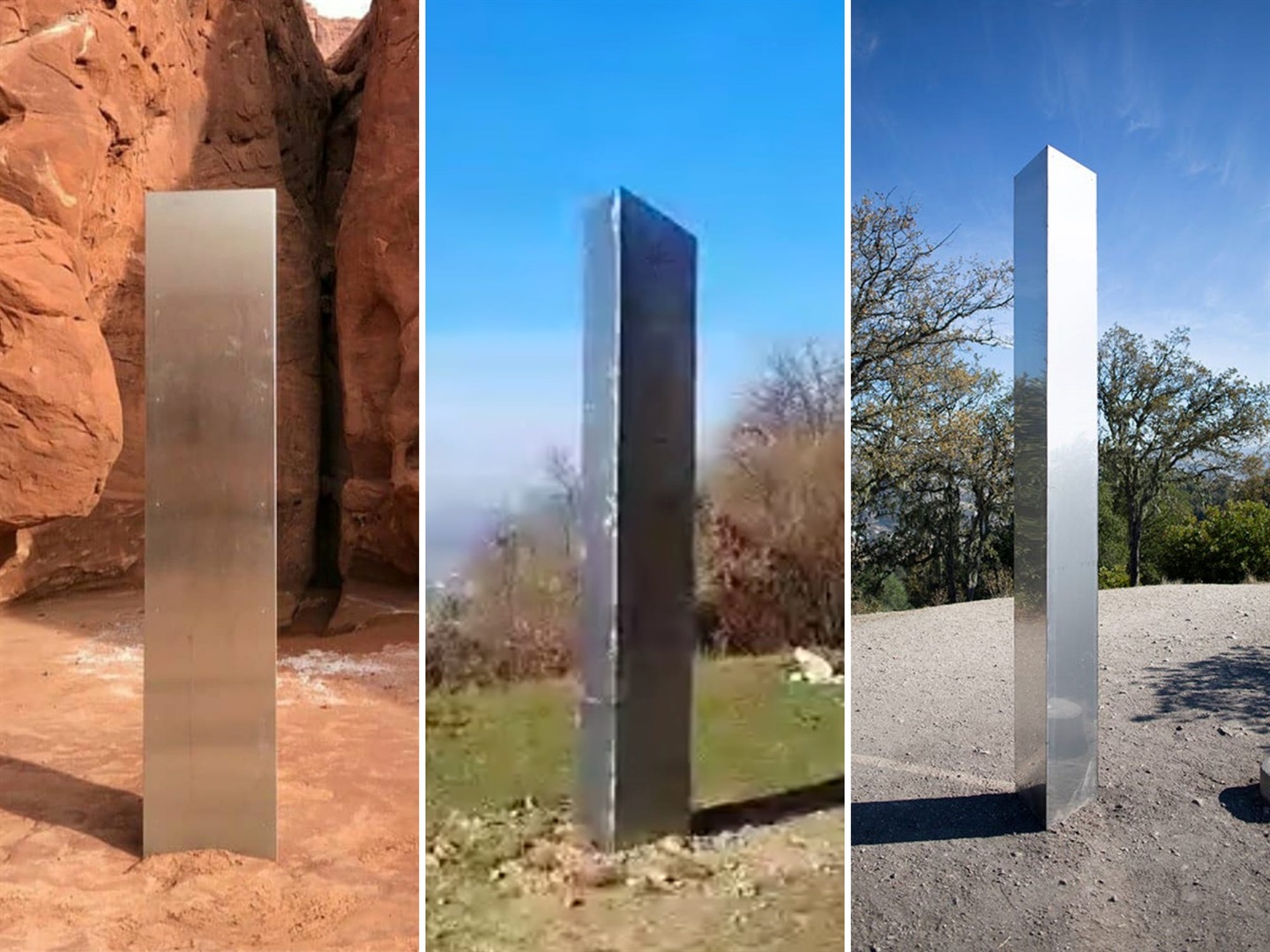 Utah state employees were conducting a survey of wild bighorn sheep last month when they saw it: A shiny metal tower was sticking out of the rocky canyon floor.

Images of the tower, which came to be known as the "Utah monolith" due to its resemblance to the similar objects in "2001: A Space Odyssey," spread rapidly.

Though found on November 18, the structure seems to have been in the canyon since at least October 2016. Then it disappeared on November 27; video later surfaced of a group of men taking it down.

The same day, a second monolith appeared in Piatra Neam?, Romania, only to disappear on December 2. That was when a third appeared in Atascadero, California.

After those three, another monolith appeared. Then another. Within a month after the Utah monolith was discovered, at least 87 similar metallic towers have popped up around the world. Often eerily beautiful, the structures have been spotted in California, the Netherlands, Morocco, Canada, Australia, and dozens of other locations.

"There's heaps. I love it, I think it's great. It's kind of like a meme, an idea that catches on. And I think it says a lot about this year as a whole," Alex Apollonov, otherwise known as the prankster artist "I Did A Thing," told Insider. Apollonov has taken credit for installing a monolith in Melbourne, Australia, with help from his friend Aleksa Vulovic and the comedy group Arty Donna.

"Everybody's been kind of just in a shit world," Travis Kenney, another monolith maker, told Insider. He and some friends were behind the monolith in Atascadero, California.

"Our town got super excited about it," Kenney said. When Kenney and his buddy Wade McKenzie installed their monolith on the top of Pine Mountain in Atascadero,  they only knew of two others: the monoliths in Utah and Romania. Adding a third felt like the obvious move.

"If you know '2001: A Space Odyssey,' you know there were three monoliths," Kenney previously told Insider. "I'm like, you know there's gonna be a third. It's gonna happen. So why don't we build it?"

So his group constructed and hauled a 230kg pillar almost 4km up a hiking trail.

Apollonov, Vulovic, and Arty Donna put up theirs less than a week later. They hired builders to make the structure out of a zinc alloy, then transported it on top of their car to a forest outside of Melbourne.

The team filmed their process and published a video on December 8.

"If you're determined and stupid enough, it's an easy enough thing to make," Vulovic told Insider. A park ranger carts away the Melbourne monolith in early December.
I Did A Thing

Like the structures in Atascadero, Utah, and Romania, their monolith was taken down soon after it appeared.

Most monolith makers have not come forward. But in some places their works have been found, the craze has brought unexpected benefits and consequences.

Take, for example, the monolith that popped up outside The Paul Jolly Center for Pet Adoptions, an Animal Defense League center in San Antonio, Texas. Within days of the structure's appearance on December 3, the group's adoption website started seeing increased traffic. Adoption managers' appointment slots filled up.

"It really is something that took us by surprise," Joel McLellan, executive director of the Animal Defense League of Texas, told Insider. "We don't know who created it, we don't know how long we're gonna have it. But what we do know is it's certainly creating a wonderful outcome."

As of Friday, the monolith was still standing outside the center. A monolith outside the The Paul Jolly Center for Pet Adoptions in San Antonio, Texas, December 9, 2020.
Michelle Thorson/Animal Defense League of Texas

In Atascadero, Kenney and McKenzie wound up building a second monolith for permanent installation after a covert conversation with the town's mayor, Heather Moreno.

"She kind of gives us the verbal wink, wink: 'I want it back in the same spot where it was, but I want it permanent,'" McKenzie said.

Their first monolith was designed to be temporary, and it got torn down by a group of men chanting "Christ is King." The men livestreamed themselves as they erected a wooden cross in its place.

Kenney and McKenzie put their replacement monolith in the same location as the first, hauling it back up the same trail. Unsurprisingly, the interest in the monolith phenomenon has also led myriad people to claim credit for them and even try to profit. Vulovic, for instance, claims that in addition to the Melbourne monolith, he was also behind the structure in Romania and another in Šabac, Serbia, that hasn't been discovered yet. But he did not give Insider sufficient evidence to verify the claims.

Similarly, a New Mexico-based artist collective called The Most Famous Artist recently hinted that it was responsible for some of the monoliths. It is now selling three monolith structures for $45,000 (R650,000) apiece online. The collective's founder, Matty Mo, has avoided directly claiming credit for any monoliths, however.

Ultimately, the Utah statue remains a mystery, as do those of most of the 80-plus copycat structures.

More are still popping up. On Sunday, András Arató - better known as "hide the pain Harold" due to viral stock photos of his distressed-looking smile - posed with a monolith that appeared in Budapest, Hungary.

That one bore a plaque saying it was a gift of the Galactic Federation, a purported alien society.