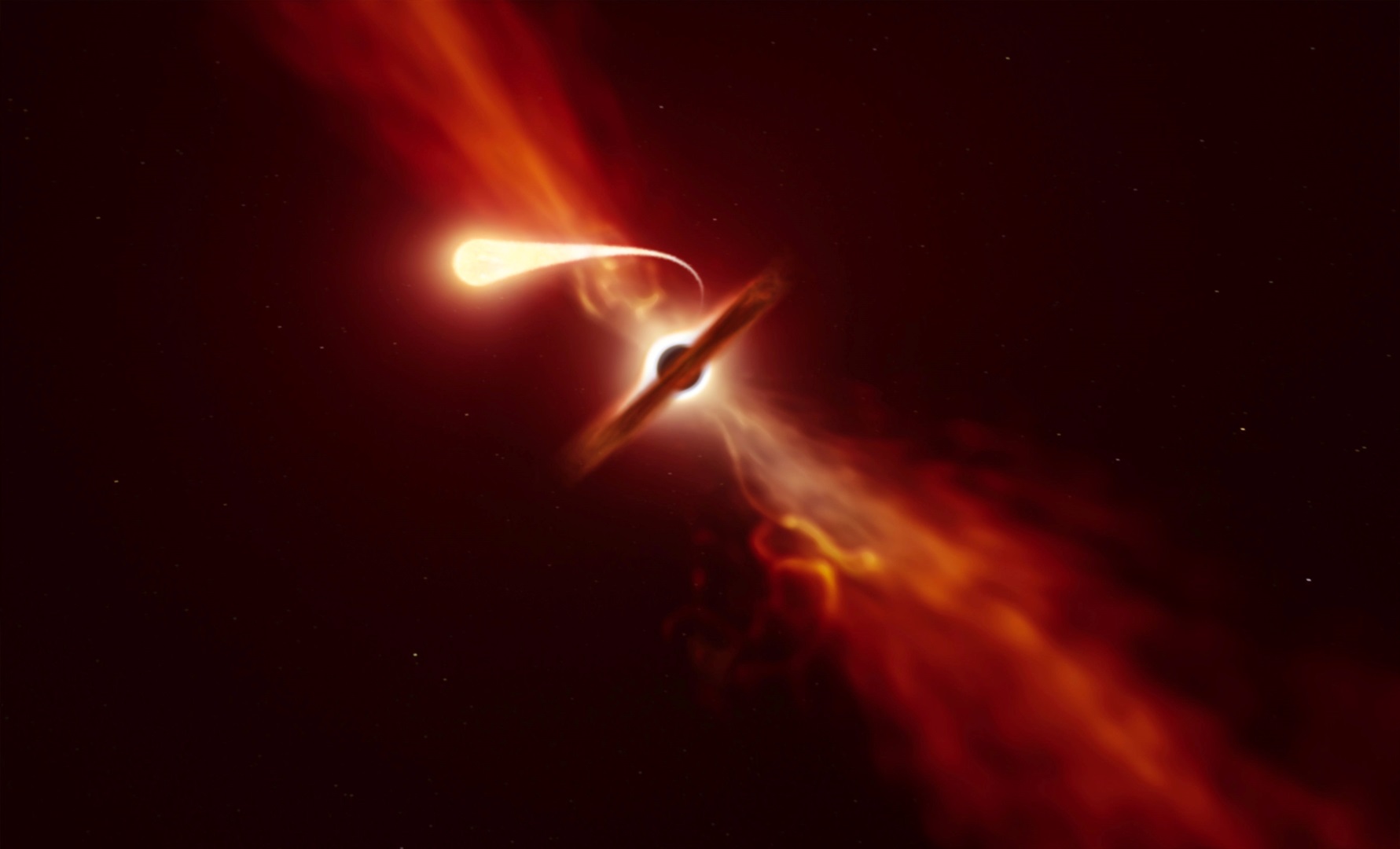 This illustration depicts a star (in the foreground) experiencing spaghettification as it’s sucked in by a supermassive black hole (in the background).
M. Kornmesser/ESO

Astronomers have captured a rarely-seen event: a flare of light caused by a black hole devouring a nearby star like spaghetti.

Observed in the Eridanus constellation, about 215 million light-years away from Earth, the star's destruction is the closest such event astronomers have ever observed.

"When an unlucky star wanders too close to a supermassive black hole in the center of a galaxy, the extreme gravitational pull of the black hole shreds the star into thin streams of material," study author Thomas Wevers, a fellow at the European Southern Observatory in Santiago, Chile, said in a press release about the discovery.

This process is called a tidal disruption event – or, more colloquially, "spaghettification," a nod to the long, thin strands a star becomes as the black hole's gravity stretches it thinner and thinner.

When these strands get sucked into the black hole, they release a powerful flare of energy that astronomers can detect, even from hundreds of millions of light-years away.

A screenshot taken from a video zooming in on the AT2019qiz tidal disruption event, 215 million light-years away. This phenomenon, a blast of light from a star being ripped apart by a supermassive black hole, has been studied by ESO telescopes.
N. Risinger/ESO/Digitized Sky Survey 2

The researchers studied the dying star over a six-month period, using tools including ESO's Very Large Telescope and its New Technology Telescope, and published their findings in Monthly Notices of the Royal Astronomical Society.

The research team discovered the star soon after it started getting ripped apart, and observed it through ultraviolet, optical, X-ray and radio wavelengths. The combination of the star's proximity and timing allowed the astronomers to study it in "unprecedented detail," according to the press release.

Even though a spaghettifying star releases a bright energy flare, researchers have often had trouble in the past examining such flares because dust and debris obscure them. Now they know the debris comes from the spaghettification process itself.

"We found that, when a black hole devours a star, it can launch a powerful blast of material outwards that obstructs our view," Samantha Oates, an astronomer at the University of Birmingham and a coauthor of the study, said in the press release.

In other words, as the black hole gobbles up the star, it releases energy that flings chunks of star-debris outwards.

By the end of the study period, "it lost about half of that to the monster black hole, which is over a million times more massive," Matt Nicholl, a Royal Astronomical Society research fellow at the University of Birmingham and lead author of the study, said in the press release.

Going forward, the astronomers hope their detailed observations of this spaghettifying star can help future researchers demystify similar events – and in doing so, help us learn more about how black holes and matter interact.