More than a million space rocks could strike Earth with more energy than a nuclear bomb, and we don't know where most of them are Our home planet is a moving target for asteroids. NASA wants to find them before it's too late.
REUTERS/NASA/Handout
The threat of an "Armageddon-like" asteroid colliding into Earth is more real than you might think.

Though an Earth-destroying asteroid of the size that a crack team led by Bruce Willis and Ben Affleck destroyed with a nuclear bomb is statistically improbable, NASA is taking the threat of smaller, near-Earth Objects (NEOs) seriously.

According to a new report the agency released earlier this month — which is based on a 2016 report — NASA is seeking to coordinate a strategy across a number of federal agencies to locate, track, and destroy asteroids that may pose a threat to Earth. It's a mission handed to the space agency from Congress, which passed a law in 2005 charging NASA with finding potentially hazardous NEOs.

"If a real threat does arise, we are prepared to pull together the information about what options might work and provide that information to decision-makers," Lindley Johnson, NASA's aptly-named Planetary Defence Officer, said in a press briefing. NASA is focused on finding asteroids that are larger than 140m across, otherwise known as city-killers.

We're basically sitting on a moving target for these space rocks.

Asteroids of this size are difficult to detect, though they can pack a serious punch: if they smash into the Earth, or even enter our atmosphere, they can explode with the energy of least 60 megatons-worth of TNT — more powerful than the strongest nuclear weapon ever detonated.

"You do that over a city, and it's a very, very bad day," Mark Sykes, director of the Planetary Science Institute previously told Business Insider.

Scientists estimate that there are over a million of these city-destroyers lurking just beyond the edges of our sensing capabilities — and we've only discovered about a third of them. 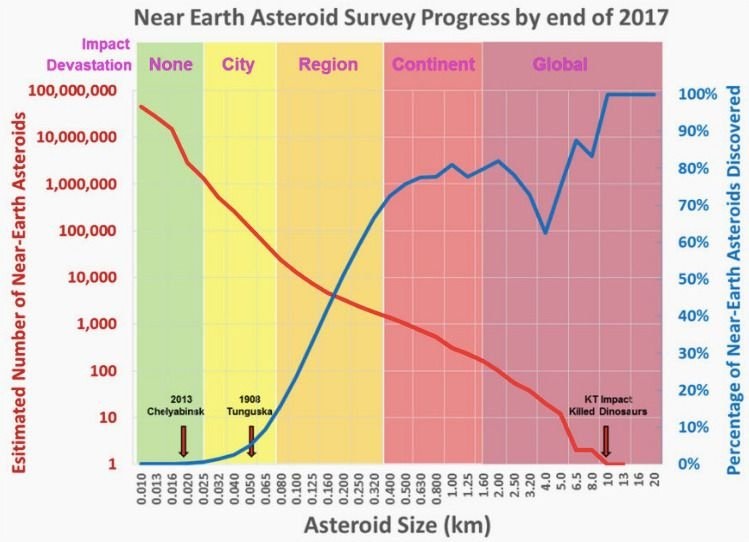 Smaller asteroids can pose a threat, too. Take the asteroid that exploded over Chelyabinsk, Russia in 2013. The 20 metre asteroid — which no space agency detected before it entered the atmosphere, because of its small size — caused broken windows and a number of injuries.

In 1908, a 150m asteroid wiped out an area roughly the size of New York City over Tunguska, Russia, with a force equivalent to a nuclear bomb. If that asteroid hit a major city, it could potentially cause millions of casualties. Equivalent area of destruction for a Tunguska-sized asteroid over New York City.
NASA

One of the ways scientists want to find these asteroids is with the proposed Near-Earth Object Camera, or NEOCam, which is a space-based telescope that would find hazardous asteroids using an infrared camera.

NASA committed to funding the NEOCam last year, but its future is uncertain, as the technology remains in an "extended study phase," according to SpaceNews.

We need to find these asteroids before it's too late. An asteroid of 123m narrowly missed Earth in May, the largest asteroid to come that close to our planet in hundreds of years.

Related Links
Mars will soon come closer to Earth than it has been in 15 years — here's how to see it
Climate change could make your food less nutritious, according to Harvard researchers
A tiny satellite bound for Mars just snapped a photo of Earth that will make you feel puny and...
Next on Business Insider
300 employees at TikTok and parent company ByteDance worked in Chinese state media, LinkedIn analysis