After a duct-taped banana took the world by storm at Art Basel Miami Beach, fast-food chains Popeyes and Burger King parodied the viral artwork, plastering chicken sandwiches and french fries to the wall.

The original art installation, titled "Comedian," consisted solely of a spotted yellow banana taped to the wall with a strip of duct tape. The installation was created by Italian artist Maurizio Cattelan and was on display at Art Basel Miami Beach, an art show that was open to the public from Thursday until Sunday.

Popeyes Louisiana Kitchen joined in on the viral conversation, designing its own installation that was on display at Art Basel. Popeyes' artwork, "The Sandwich," featured one of its infamous fried chicken sandwiches taped to a sheet of canvas. 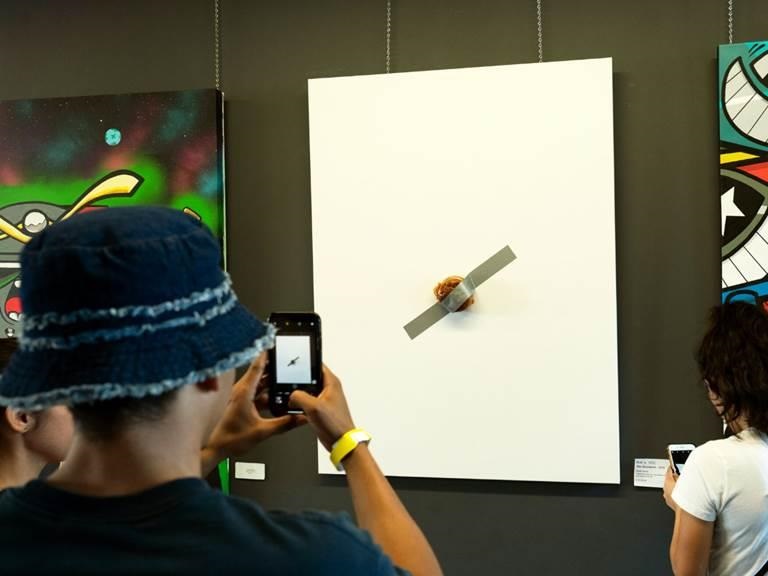 "Popeyes Louisiana Kitchen quickly jumped on the hype related to one of Art Basel's most notable installations of the year, just hours after some debate-triggering art went viral," a Popeyes spokesperson told Insider in a statement via email, adding that the artwork was made in partnership with San Paul Gallery of Urban Art.

Popeyes' statement continued: "When an art lover finally decides to buy it, profits from the sale will go directly to The Popeyes Foundation, a nonprofit organisation that helps communities with food and support in times of need."

Popeyes shared a photo of the installation in a tweet on Friday, writing that "The Sandwich" consisted of a toasted brioche bun, pickles, fried chicken, and mayo and was a "duct tape on canvas" piece.

Donâ€™t eat the art. Even though itâ€™s delicious. Go see our masterpiece â€œThe Sandwichâ€ at @Sanpaulgallery for #ArtBasel.

The fast-food chain partnered with advertising agency Buzzman to create an advertisement for a campaign called "Careful what you swallow," according to AdAge.

Burger King France's tweet translates to the campaign's name: "Careful what you swallow."

"Comedian" gained so much attention that officials from Cattelan's gallery, Perrotin, announced on Sunday that the banana would be removed from the space, stating that the popularity of the piece posed a safety hazard to crowds, according to The New York Times. However, before "Comedian" was removed from the gallery, a performance artist, David Datuna, reportedly took the banana from the wall and ate it.

Datuna shared a video on Instagram of the moment he devoured the banana, calling the art performance "Hungry Artist."

Representatives for Art Basel, Burger King, and Buzzman did not immediately respond to Insider's requests for comment.