Archaeologists have discovered an Egyptian mummy buried with a golden tongue 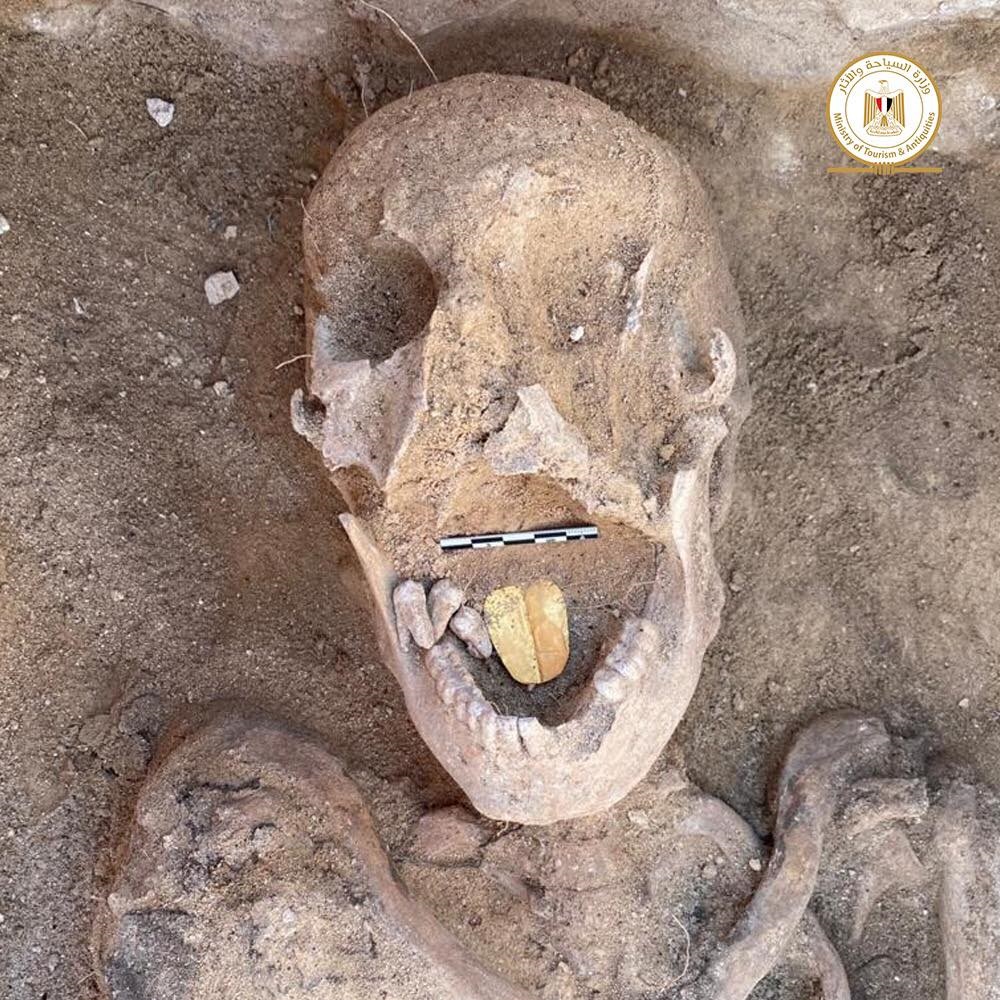 A 2,000-year-old mummy with a golden tongue found in Alexandria, Egypt.
Egyptian Ministry of Tourism and Antiquities

Two millennia ago, ancient Egyptians were laid to rest in the Taposiris Magna Temple outside Alexandria. Their organs were removed, and their bodies wrapped in linens.

One mummy was given a great honor: priests and embalmers placed a gold amulet shaped like a tongue in its mouth, so that the dead could speak with gods like Osiris - lord of the Egyptian underworld - in the afterlife.

The golden tongued mummy was among countless others recently discovered in Alexandria, the Egyptian Ministry of Tourism and Antiquities announced Friday.

A joint mission of Egyptian and Dominican archaeologists found 16 burial shafts carved from rock under the temple.

The mummies inside were "in a state of poor preservation," the ministry said, adding that this was characteristic of mummification during the Greek and Roman eras.

Some mummies were decorated after they were buried A female mummy covered with a death mask from Alexandria, Egypt.
Egyptian Ministry of Tourism and Antiquities

The mummy with the gilded tongue wasn't the only star of the recent finding.

According to Dominican archaeologist Kathleen Martínez, who led the expedition, two of the most important mummies the group found were buried with decorative cartonnage - a material made of papyrus and linen that Egyptian used to encase mummies head to toe.

One mummy's cartonnage depicted Osiris, while the other is decorated with a crown of horns, a cobra snake on its forehead, and a falcon-head necklace, which symbolizes Horus, the Egyptian sun god.

The two mummies were also entombed with partial scrolls, which are now being deciphered.

Diggers found another mummy wearing a death mask with eye holes; death masks helped guide spirits of the deceased back to their bodies and protected the dead in the afterlife. A severed head from a statue depicting one of the mummies buried at the Taposiris Magna Temple in Egypt.
Egyptian Ministry of Tourism and Antiquities

The heads were sculpted to resemble their owners, who may have been buried in the temple.

Mysteries of the Taposiris Magna Temple

This isn't the first time the Taposiris Magna Temple, or the "great temple of Osiris," has excited archaeologists. Martínez thinks the fabled Cleopatra, the last queen of Egypt who died in 30 B.C., is buried there. In July, Martínez found mummies that were covered in gold before being buried around the time of Cleopatra's reign. The gold coverings suggest the two people were important members of society that may have interacted with the queen.

But according to Zahi Hawass, the former Egyptian minister of the State for Antiquities who worked with Martínez for a decade, there's "no evidence" Cleopatra is buried at Taposiris Magna.

"I believe now that Cleopatra was buried in her tomb that she built next to her palace and it is under the water," Hawass told Live Science. "Her tomb will never be found."