Following a blockbuster earnings report and a 4-for-1 stock split announced last Thursday, Apple surged as much as 16% to $446.55, getting it even closer to a market valuation of $2 trillion.

As of Tuesday, Apple sported a market valuation of $1.866 trillion, according to data from YCharts.com. Apple would need to hit $467.77 to reach a $2 trillion valuation, which represents a jump of 7% from current levels.

Apple was the first public company to ever reach a $1 trillion market valuation back in August 2018.

To give a sense of just how big a near $2 trillion market valuation is, Chris Verrone, head of technical and macro strategy at Strategas Research Partners, highlighted two charts that help visualize the size of Apple in a note published on Tuesday.

1. Apple on verge of overtaking the combined value of 2,000 US small-cap companies.

The law of large numbers has been a bearish talking point for Apple over the years, but Verrone isn't so sure, saying, "We have no idea if this is bullish, bearish, or irrelevant." 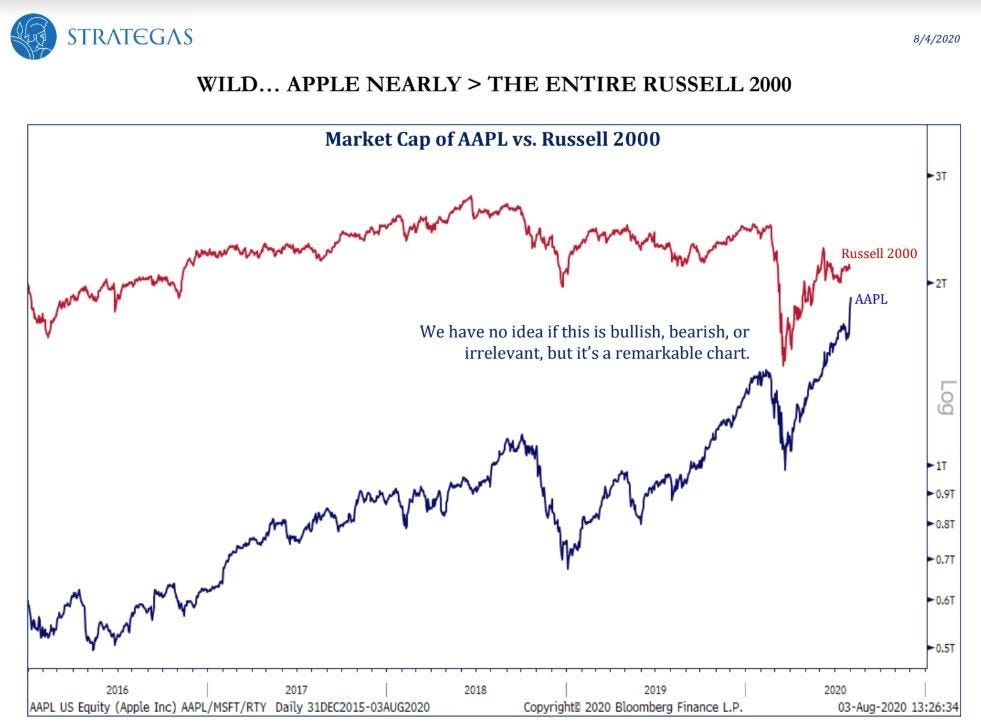 2. Apple overtakes record from IBM as largest weight in S&P 500 over the past 40 years.

The stock with the largest weighting in the S&P 500 is Apple, given that it's the largest publicly traded company in the US. But its recent tick higher shattered a 40-year record previously held by IBM, making it the largest single weight in the S&P index.

Additionally, Apple combined with Microsoft, Amazon, Alphabet, and Facebook currently hold a 23% weight in the S&P 500, according to Strategas.