Six months with Apple's 2018 Mac Mini: Everything I love and hate about it For over a year, I was waiting to build out the office space in my new apartment because I was waiting - hoping, really - for Apple to release a new Mac Mini.

The Mac Mini had not received a meaningful update in four years. But at Apple's big October event in 2018, it finally happened: The Mac Mini got the love it deserved, with powerful new specs and a beautiful space-gray finish.

I bought the Mac Mini last November, and I've been using it for about six months now.

Here's everything I love and hate about the 2018 Mac Mini.

LOVE: Apple offers plenty of customisation for the Mac Mini. The base Mac Mini comes with a quad-core i3 processor, 8 GB of RAM, and 128 GB of solid-state storage. But if you need more processing power, more memory (RAM), or more storage, Apple has a ton of upgrade options available.

If you max out the new Mac Mini, it will come with a 6-core i7 processor, 64 GB of RAM, and 2 terabytes of solid-state storage.

There are, of course, plenty of options in between. But I appreciate that Apple considered every type of user when creating its customization options.

HATE: The pricing to upgrade the Mac Mini borders on absurd.

I'm hoping the price of this Mac ends up being a good investment. I spent about R9,500 on the new MacBook Pro back in 2013, but that computer still runs like new five years later. Given the cost of the Mac Mini, I'm hoping to get similar mileage. The Mac Mini is a beautiful little computer. It has rounded edges and a matte finish in that deep space gray color. The ports are neatly arranged on the back, while the front face is clean, with the Apple logo on top. It fits almost any aesthetic.

HATE: Apple couldn't have bothered to throw in any accessories? As I mentioned before, the new Mac Mini isn't cheap. Even if you get the most basic options, you're still paying for a computer with no accessories.

Maybe I shouldn't be surprised, but I was disappointed to see that my Mac Mini box only included the computer itself, and the power cord. No Magic Keyboard, Magic Trackpad, or Magic Mouse - not even any cables or adapters!

Not everyone will use the Mac Mini as a traditional computer like I do, but if you spend over $1,000 on an Apple product, I think the company should throw in some kind of freebie. Even just a $10 USB-C cable - it means nothing to Apple's bottom line, but it would mean a lot to me as a customer.

LOVE: The computer is quick and quiet. When it comes down to the computer's actual performance, the Mac Mini really shines. Daily tasks are no problem: browsing the web with dozens of tabs open at a time, watching videos, taking screengrabs, and editing photos are all a breeze. I'll admit I haven't really pushed the computer to its absolute limits, but for my most common daily needs - handling multiple displays and workloads - it performs beautifully.

I also love how quiet it is; I have never heard it spinning up or overheating, and I work mostly in a den space in the back of my apartment without windows. I'm able to just barely fit all of my accessories.

Currently, my Mac Mini is connected to two monitors, a keyboard, a mouse, computer speakers, and a webcam.

Overall, I was most annoyed by the Mac Mini's single HDMI port - I'm using more than one monitor, and most monitors have HDMI as their main input - and its uneven mix of USB-C to USB 3.0 ports. I know Apple is trying to future-proof its machines, but most of my accessories still require HDMI and/or USB 3.0. Only a few of my accessories use native USB-C; I know it's the future and all, but I'm still living in the present.

The solution, to me, would have been to add more ports. I have no idea if this is actually possible, but as an owner, I find myself wanting to plug in more devices. I can't, for instance, plug in an extra USB cord to charge my many devices, like headphones and computer accessories, since all of my ports are being used. If Apple couldn't add more ports, it could have at least included a couple of USB-C to USB 3.0 adapters with every Mac Mini purchase.

ALSO HATE: The Mac Mini doesn't have a discrete GPU. The 2018 Mac Mini features an integrated Intel UHD Graphics 630 chip, which doesn't even come close to the performance afforded by chips like AMD's Vega 56 GPU, which Apple uses for its iMac Pro.

Unfortunately, the lack of a discrete GPU means the Mac Mini is simply incapable of running some programs and applications, particularly around broadcasting and gaming. For that, you'll need to buy a separate external GPU, or eGPU, which can get very expensive. (In other words, the Mac is still not cut out for gaming.)

CONCLUSION: The Mac Mini is an excellent computer, but it's not for everyone. 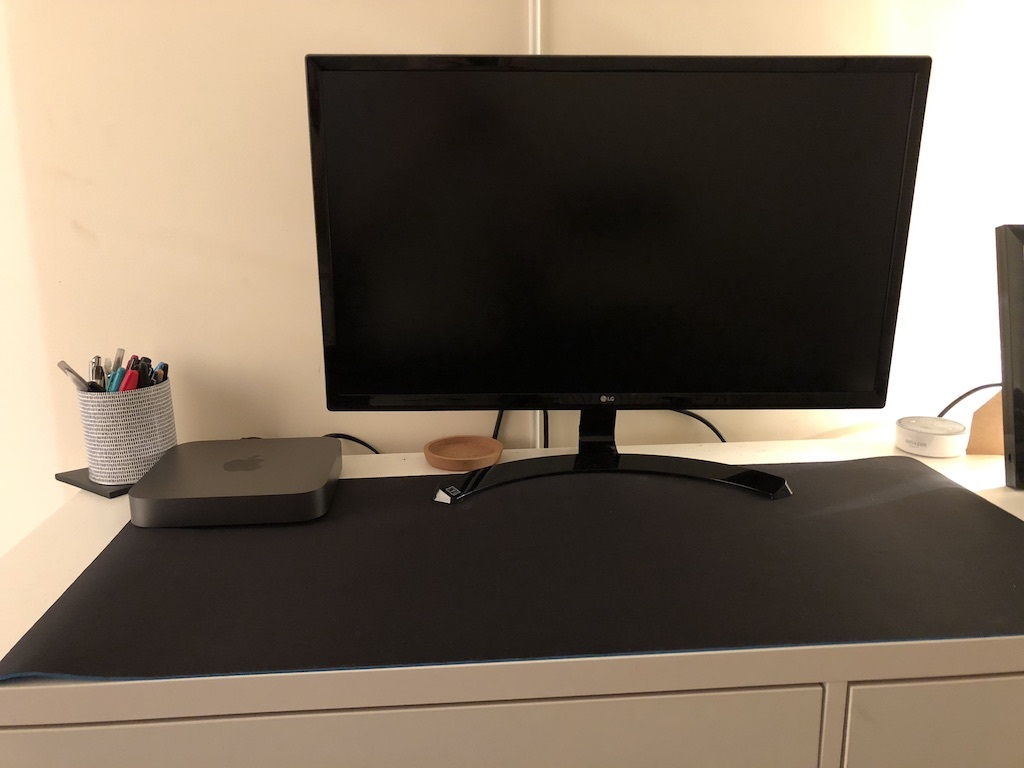 The Mac Mini excels as a desktop computer for work. It's fast, efficient, and pin-drop quiet.

The few drawbacks, to me, were in the details. Given the steep price of the new computer, I was bummed that Apple didn't include any extra cables or adapters - requiring more separate purchases - and I would've loved more ports to connect even more devices and accessories. Those details don't ultimately ruin the experience for me, though.

Is the Mac Mini the right purchase for you? It depends what you want out of a computer. If you want something that just works right out of the box, this isn't it; the Mac Mini is simply a starting point that requires you go out and complete the setup or swap in your own keyboard, mouse, and monitor setup.

You can use the Mac Mini in so many different ways: It can be a server, or an entertainment console, or a DJ booth. Maybe you'll make a traditional setup like I did, and you'll buy a monitor or two, a keyboard, and a mouse. However you might use the Mac Mini, though, it requires doing some research before your purchase, and potentially a few purchases after the fact, to make it all complete.

I do wish Apple didn't raise the price of the Mac Mini. It used to start at $499; now it starts at $799. The computer is much faster and better than it was years ago, but I don't believe that justifies the price hike. Still, I'm happy to recommend the computer for anyone looking for a customisable Mac setup, as long as you're willing to spend for it. It's an excellent computer in a gorgeous, petite package. But the devil's in the details.